Chinese hackers attempted attack on Indian Cyberspace more than 40,300 times in a week post- Galwan clashAn Overview: After a...
269

It is that time of the century when Augmented Reality is a part of your daily lives from planing to medical sectors? The answer is yes, but the challenges are many. For a quite period of time, there’s been considerable interest in smart cities, when there is really no universally accepted definition of smart in a city.

The ultimate aim is to transform the urban landscape with improved citizen services and a better lifestyle to its dwellers. In need of transforming the ambitious plan into reality, governments, urban planners, engineers, and architects are collaborating with the new-age digital technology. Technologies like Big Data, AI, IoT, and cloud have made the AR an initiative success. The idea of combining Augmented Reality with smart Cities will improve people’s self-reliance and decision-making strategies.

Augmented Reality is known for being an interplay of data, graphics, audio, and other types of sensory enhancements that are presented in a real-world environment displayed in real-time. The augmented reality has the potential to play a huge part in smart cities and requires very high-speed data-connectivity.

Imagine the residents in distress have plotted their locations and visualized the safest rescue routes informed by real-time disaster data from the disaster management team. Public workers can easily identify potential hazards at the works and can repair them relevantly. Several startups have already created AR tech with these capabilities for day to day city applications.

Google Maps Live view is a good example of AR navigation and uses visual positioning, street view, and machine learning to your selected location. The app recognizes solid, stationary objects like buildings and shows that need placing signs in the camera view.

AR for roads and highway engineering is a useful technology to detect road failure and accidents. Having proper and derivative information about current road conditions, structures, and underground infrastructure will provide timely solutions. The augmented reality makes sure about appropriate measures in place when fatal emergencies arise. Integrating AR technology into a smart work zone will provide greater assistance and support for the common people. 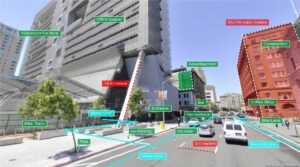 Other different types of technologies building smart cities are:

Augmented reality has become increasingly widespread and now are capable of providing the best experiences for interacting. Your smartphone or devices are the cheapest and convenient way to view the augmented reality world.

Don’t Miss: Augmented and Virtual reality- superimpose images on the real world (AR) or bring users into an artificial digital experience (VR) in the form of Pokemon games, Snapchat lenses, gaming headsets, and more. AR and VR have practical uses for city government with the ability to provide data in real-time, engage users, and simulate real-life experiences in detail.