Co-living: A Buzzword of 21st Century!

The first thing that comes to our mind when we move in from a new city is to find a perfect space for ourselves. Even though the idea might seem a lot easier to you, but it’s not as easy as it sounds. The options might be endless, but there will always be a hesitation with the flick of a finger.

Honestly, I can tell you that you have heard this term numerous times in ads, people talking about it, ad commercials or even in movies for that matter. If you are like a lot of people, you might not want to share your living space with one another. So here’s an extended explanation and to clearing your doubts as to what co-living is and how it’s different.

“It’s all about collectiveness and openness in the 21st century“

It’s confusing when community housing and communal living have been around for a while, coliving is still a new concept. It’s just not about sharing your living space with one another but also share similar values and interests. 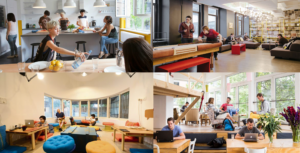 What if your living space was more than just a place to live? What if there was scope for social interactions? Or what if it decreased the everyday tedious tasks of cleaning, paying bills and buying furniture? Co-living is just that! A modern living form of housing where people share living spaces. Co-living was just an experimental concept in 2016 globally. But now, co-living is more focused on its mission for letting people live through collective social connections and of the course covers the affordability part.

Collective living, communal co-living, co-working – all these buzzwords are used to describe growing trends in urban architecture. Where the blocks are designed to function more than just blocks of unaffordable apartments. We have already seen the dramatic shifts in commercial spaces in large cities around the world with co-working spaces holding more than traditional office spaces.

Space utilization patterns show that people typically spend more than nine hours a day in their bedroom and bathroom areas that occupy 40% of the total apartment space. And 60% of the apartment space and cost in the hall, kitchen, and utility areas which constitutes less than three hours daily.

With more people living alone now than at any point in human history, loneliness has been their common roommate. Co-living can strive to offer an antidote to this, but it is going to require a more innovative approach than simply accepting a developing idea with a price tag.

The idea of Co-living coming to reality:

In context to the idea of co-living, IKEA’s research lab SPACE10 with digital designers Anton & Irene have launched One Shared House 2030. It’s a global online survey that aims to determine not only how people like to live, but also would be willing to share or not with their fellow residents. The ultimate goal of this survey was to understand how co-living designs can be improved and based on different types of responses.

By 2030, almost 70% of the global population will live in cities, almost two billion people- a fifth of the world’s population will lack to access adequate and affordable housing, this was estimated by a group of researchers. It is obvious that many cities, countries are a part of booming urbanization, increasing housing prices with shrinking living space.

One Shared House 2030 is playful research initiated to get insights on the future of co-living through a collaborative survey. The viewer goes through a process where he will pretend to sign-up for a co-living facility in 2030. The people let them know through the survey about their preferences in their immediate living environment, specific demographics and what type of co-living environment they will like to live in. The information that SPACE10 collects is open-source and free for anyone to use with being completely anonymous.

More than 7,000 people from almost 150 countries took this survey, and the results were remarkable. The survey results are as follows:

While residents wanted to share a home with 4 to 10 people, most co-living companies are designing giant skyscrapers that house hundreds of people.

An excellent example is in Seattle – a building that will house 384 co-living residents. Another is in Queens, New York, which will settle almost 500 apartments in a single co-living house. Perhaps these examples might be difficult to except by people who would prefer living there. Instead of aiming to understand the preferences of people, the housing model is dictated by what the company prefers. Forcing the dwellers to adapt to the specifics of co-living spaces that they are going to provide them.

The success of co-living can come through different practices but the main and important aspect should be what common people prefer. After all, these people are going to share their living space so their preferences shall be the top.

Co-living offers a sense of smart blend when it comes to community spaces to optimize real estate utilization. The main concept is to facilitate the idea of sharing of lower utilization area – living room, kitchen and utility spaces with larger communities offering an economically viable solution to urbanization and urban housing woes.

Research shows than the co-living market in India currently stand at $93 billion, comprising 30 percent of the county’s population. A new way to rent in the cities is here!

Co-living is the future. Are you all braced up for the new buzzword?