People from all disciples are worried about the increasing quantities of carbon dioxide (CO2) that is being pumped into the atmosphere directly or indirectly. Since the 19th century, scientists have discovered that greenhouse gases in the atmosphere trap heat, causing the global warming effect. CO2 makes up the overwhelming majority of greenhouse gas emissions comprising 72% of the total, compared to 18% methane and 9% nitrous oxide.

How can we forget that human activities have increased by more than 400% since 1950? While the effects of climate change are forcibly seen globally, things are going to get worse soon as CO2 emissions are continuing to rise. Something needs to change.

A development form Hypergiant Industries have designed a Bioreactor that can suck the maximum amount of carbon dioxide from the air as an acre of forest. 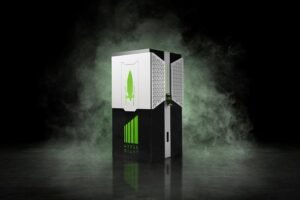 Algae is one of nature’s most efficient machine for consuming carbon dioxide. Algae needs three key elements to grow: carbon dioxide, light, and water. With the consumption of CO2, it produces biomass, which is processed to create materials that range from fuels, oils, and fertilizers to plastics, cosmetics, and even high-protein food sources.

The growth process of algae is tightly controlled and optimized with machine intelligence to maximize CO2 consumption. The A.I monitors and ensures the optimal amount of light, heat, growth, water speed, pH, CO2, and oxygen output.

The Algae bioreactor fits within a compact form factor measuring 3-foot by 3-foot by 7-foot. Being enough small enough can fit within offices, buildings as a part of a more sustainable smart city environment. It is a closed system that works indoors, connected with an HVAC system to reduce CO2 inside and release purified air. The long term concept includes integration where the algae byproduct of biodiesel provide fuel for a variety of other products that promote and improve urban living. 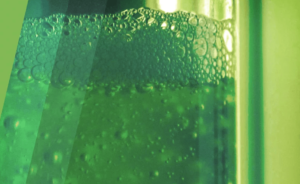 Do algae remove CO2 from the atmosphere?

Algae thrives on carbon dioxide emissions making it one of nature’s most efficient tools for carbon capture and sequestration. ‘Excess carbon in our atmosphere is driving a number of massive catastrophes for our planet and pushing us to get off the planet and colonize the space.’ – Hypergiant Industries.

One Eos Bioreactor absorbs the same amount of carbon from the atmosphere as an entire hectare of trees. Climate change has been a big problem recently and it’s our duty to see whether this solution can be the one people are hoping for.