In India, there has been a dedicated mission initiated by the government which aims at converting the cities across...
6682

The spatial organization primarily indicates the pattern of arrangement of various biotic and abiotic elements arranged in a non-randomly orientation in any space around any dimension. However, in architecture this defines the fundamental composition in creation of a particular space, there exist various methods of achieving this. The spatial organization represents the interaction between form and space; some of the common relationships are space within a space, interlocking spaces, adjacent spaces, spaces linked by a common space and so on. The arranged manner of organization helps in giving an array to the separate units or elements that are a part of the design. The common methods of such arrangements are a linear organization, radial organization, grid organization, clustered organization and so on. These have been the constant principles throughout the pages of the history of architecture as well, whether it is modern design or the ancient periodic ones that withstood time all have them in common.

Space within a Space is a like a large canvas having a lot of smaller spaces, where the larger space acts to create a visual boundary, hence the smaller space depends on the larger one, which eventually defines the environment along with the relationship. It is to keep in mind for the spaces to be distinctively visible there must exist a clear difference in size between the two spaces as if the smaller spaces increases in size the outer one will start to lose its importance. Also the smaller space could define itself by having a different orientation or could indicate a functional difference adding onto the entire building envelope. 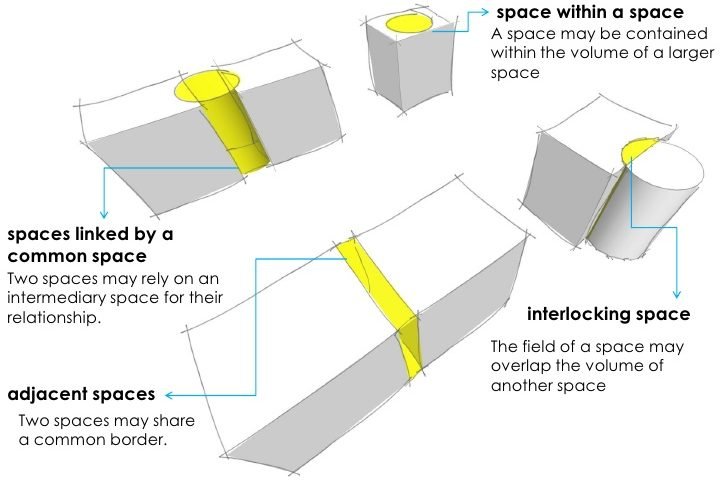 Interlocking space indicates the relationship between two such spaces having their volumes overlapping giving an identity to space and the common space is hence the area of mutual sharing. Although the interlocking area can be shared equally by each space, it can also converge with one of the spaces and become an inherent part of its volume, and it might serve as the link between two original spaces.

Adjacent spaces allow each of the individually independent spaces to clearly define them and still serve their individual needs, however, the continuity that exists between the two space depends on the characteristics of the plane that they are separated and bridged by at the same time. It can either appear as a standalone plane in a volume of space or it might exist as a row of columns and allows a better visual continuity. Also, a plane can be layered using level differences, material differences, or even texture differences and can be separated into two different zones.

Spaces linked by a common space, which is that two separate spaces can be joined by a third intermediate space and the attributes of the two spaces are defined by there relationship with the third space. However, the intermediate space can differ in orientation or shape from the other two spaces or can be of the same size and of the same material. 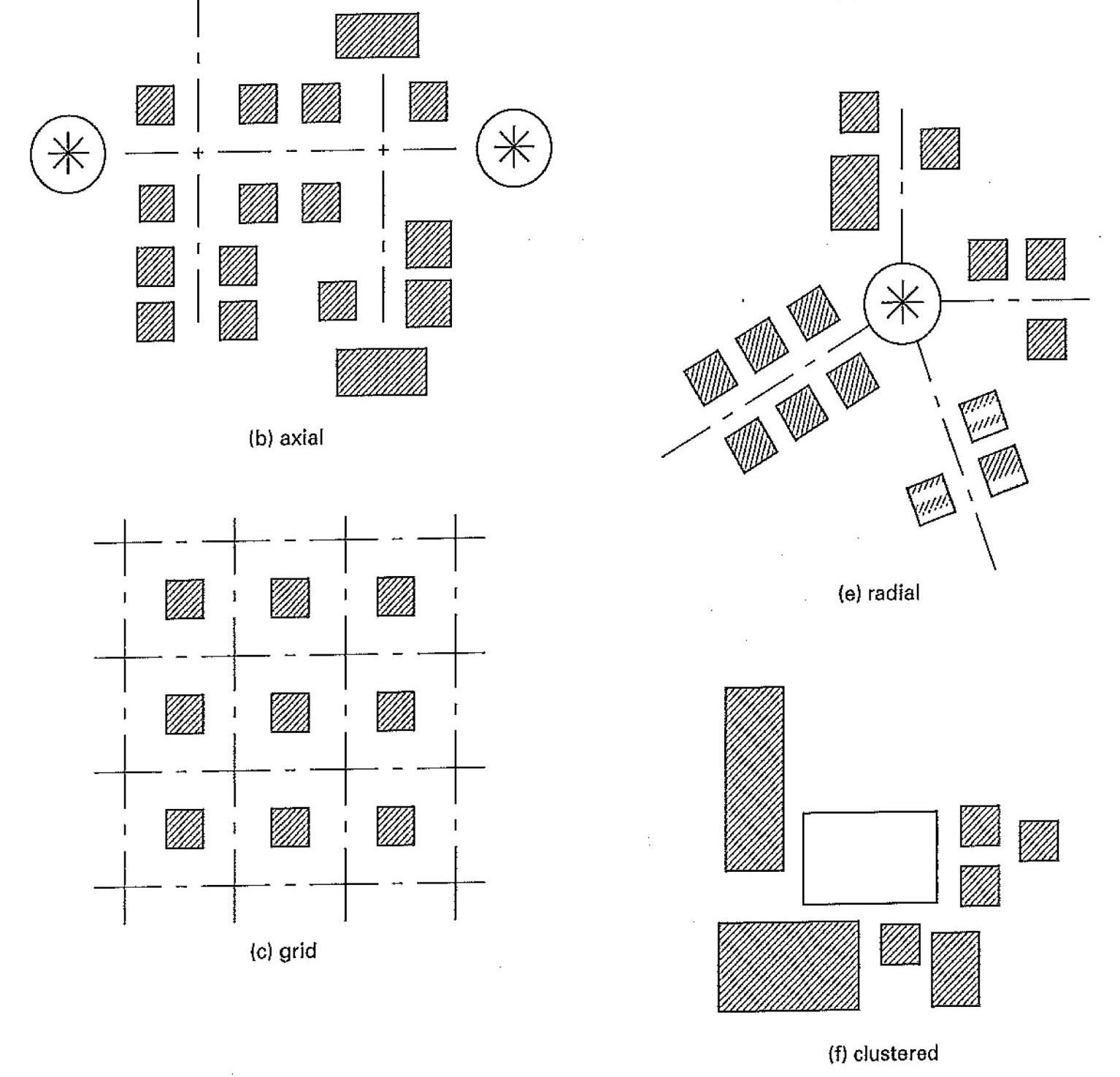 A centralized organization has an area of highlight in the centre of the structure with other smaller spaces arranged around it in a stable or concentrated manner. The secondary spaces can be equal in sizes or different, depending on the purpose that they are meant to serve in order to have a balanced composition. The circulation pattern within a centralized organization can be radial, spiral, or a loop but virtually and ideally the movement pattern will end around a central space.

Liner organization can be defined for a single unifying element about which other objects can be added depending on their function, size and requirements. They are liner as they are arranged along an axis rather than a random arrangement, without any element of visual hierarchy or special articulation as a result of which there linear volume is dominant.
The radial organization is a combination of both centralized and linear organizations having a central focal point from which the radial linear spaces seem to emerge, however, it in radial organization every unit seems to expand towards the surroundings while incase of centralized organization it seems to be inward.

Grid organization has a three-dimensional appearance to a liner structure, arranged perpendicular to each other, giving the composition a sense of stability uniting the forms of various sizes and shapes. This allows a particular area to stand out and acts as a hierarchy.