The advances in computing, materials, and electric propulsion technology, being one of the most enduring symbols of futurism – flying vehicles is all set to become reality. A leader in the field of UAM for the on-demand helicopter services Voom, Airbus Urban Mobility envisions a comprehensive mobility concept. Crucially, the study aimed to avoid any detrimental impacts from the disruptive technology, that can easily arise when truly revolutionary transport modes are introduced to the cities without careful planning for both short -term and long-term scenarios. 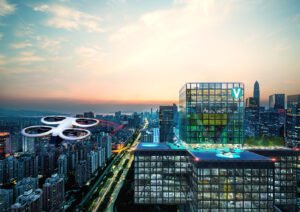 From drones that flap like real-life pigeons to boomerang-shaped ‘flying wings’, humans have developed remarkable advancements in aviation over the past few years. By collaborating with Airbus, Bauhaus, Luftfahrt, ETH Zurich & Systra, MVRDV has formulated a fool-proof plan for the future of Urban Air Mobility.

The potential of this project lies largely in vertiports, landing hubs integrating the aerial network with the existing and future ground transportation system. Vertiports of various types and sizes like traditional transport stops, stations, and terminals. Unlike stations for urban transport options like trains, metros, or buses, the network does not require tracks, tunnels or roads in between, saving energy, natural resources, and land. This multi-functional space allows designers to adapt the vertiports to a variety of different locations, plugging into and enhancing existing urban scenarios with different configurations. 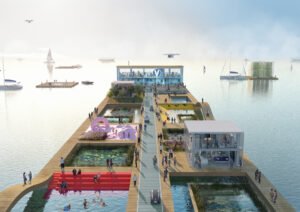 The vertiports have been designed as catalysts for urban improvements by addressing the resources and impact as a foundational step in their integration process. Vertiports are also thought of not just stations, but also as hubs of renewable energy, data, and public amenities. All these new interventions are considered as transit-oriented development, and not only bringing airborne transport links. In the locations that are underdeveloped, vertiports can be designed as opportunity hubs with educational and healthcare facilities, business incubators.

Over the past two years, MVRDV has supported airbus in exploring new strategic urban development scenarios leveraging UAM as an opportunity to grow cities around the globe into the urban regions. The plan suggests that an array of vertiports vary in terms of size and style, like current terminals but with better infrastructure.

“As cities become denser and technologies improve, it becomes increasingly clear that the truly three-dimensional city – one that includes flying vehicles – is surely one of the city models of the future… a city where my mobility is at my balcony!” says Winy Maas, founding partner of MVRDV. 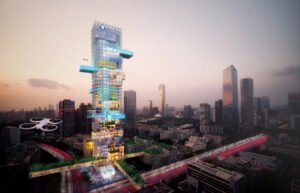 A mature network of vertiports cab serves to connect disadvantaged areas of cities and remote areas without the need for expensive infrastructure, vastly improve emergency response times and can allow ‘technological leapfrogging’ in developing nations, providing a transit network which is relatively inexpensive to create in cities that never developed extensive metro or tram systems.

It also saves energy, natural resources and makes the idea of vertiports a sustainable solution. In order to create a futuristic look, MVRDV and Airbus developed various scenarios based on cities around the world, showing how viewports can be integrated into a variety of urban scenarios.