Ecological systems have been surviving on earth for a long time and will continue to exist in the far...
872

In the current scenario with an increase in the hyperdensity of cities, people are forced to expand vertically rather than horizontally on the earth’s surface. It is not just towers, high rise buildings or apartment buildings that are reaching skyward; we now have vertically expanding gardens, commercial farms and green facades. Many people don’t have enough space to grow a garden and are often forced to look at container gardening as their only option. But now you can always consider vertical gardening in a small space.

A new era of landscape design has been introduced with the concept of living walls or vertical gardens. It is a perfect solution for all kinds of interior and exterior work such as terraces, receptions, hotels, building facades, etc.

The trend of sustainability is putting forward a very interesting and important approach between architecture and the environment. One of these approaches is facade greening which has started to play an important role in climate-responsive architecture. It’s not an innovation but rather a new concept that has proved to be an excellent energy-saving method.

Vegetation can drastically reduce the maximum temperature of the building as it shades all from the heat associated with solar gain. Through evaporation and transpiration, a massive amount of solar radiation can be converted into latent heat which prevents the temperature from rising. It acts as a barrier, blocking the transmission of plant radiation from the interior as well as exterior, becoming a potential tool of isolation. 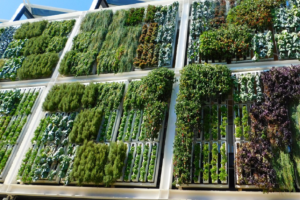 A facade can be designed in a way building gets the optimum amount of natural daylight which could reduce the artificial lighting in the internal environment. Over illumination that results in glare and overheating can be prevented through planting vegetation. It reduces HVAC load and occupants’ discomfort. Window to wall ratio, assembling of windows and glazing properties of glass needs to be taken care of.

Rapidly increasing urbanization has resulted in the reduction of green spaces. The interaction between human activities and biodiversity has become more and more difficult. The implementation of vertical garden systems in urban dwellings creates a habitat for flora and fauna. However, it needs to be considered that different plant species require different living conditions. Hence, the type of plantation needs to be chosen carefully.

Increasing transportation and the urban population have brought with it the problems of noise pollution. Vertical garden systems offer the best way to avoid the negative effects of noise pollution. It can be used as a noise barrier. The depth of growing media, the material used in the structural component, type of plant species used; all these factors help in reducing the noise level inside the building.

Urban heat island (UHI) effect means that the urban temperature is higher than the surrounding regions due to urbanization. During the day time, concrete surfaces of the building absorb the solar gain which is released during the night time because of convection. This increases the overall temperature of the city. The vertical garden helps in reducing this effect by increasing the evaporation surface and reflecting back sun rays. 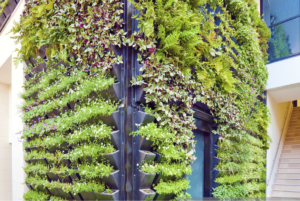 It helps in improving air quality and climatic balance of the surroundings. Vertical gardens are beautiful, space-saving and sustainable in addition to our urban dwellings.