Virtual Traffic Jam: Created By Carrying 99 Smartphones In A Wagon

Google Maps, excellent navigation, and traffic tool that is highly useful, that doesn’t mean it can’t be fooled. Simon Weckert, a Berlin-based artist, tricked the app into thinking that a completely empty street is bursting with traffic. 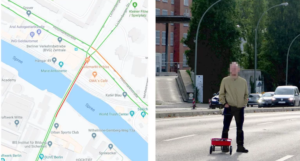 The streets were shaded in dark red on Google Maps, warning drivers of a traffic nightmare. Whereas, in reality, almost no one was on the road, except a lone man pulling a little red wagon packed with 99 smartphones. Google Maps provide real-time traffic data through crowdsourcing, monitoring the locations and speed of phones traveling along on a roadway. He generated ‘virtual traffic jam’ in google maps, turning green streets red in the online navigational tool and how digital technology can have a real impact on the physical world.

Through this venture, it is possible to turn the green street into red, which has an impact on the physical world by navigating cars on another route to avoid being stuck in traffic, according to Weckert. Google’s map service has fundamentally changed our understanding of what a map is, how we interact with maps, their technological limitations, and how they look aesthetically. – cited by Weckert for a journal article by the German anthropologists Moritz Ahlert.

Google Maps, Apple Maps, have done their share of shaping society since coming to smartphones in the early 2000s. Trying to get around faster, they’ve transformed once-quiet residential streets into bustling cut-through routes. It can be assumed that they may have overall traffic worse, burdening some routes with congestion.

A Google spokesperson said: Whether via car or camel, we love seeing creative uses of Google Maps as it helps us to make maps work better over time. 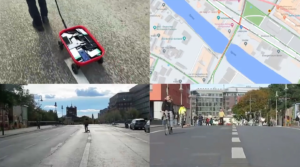 The advent of google’s geo tools began in 2005 with maps and earth, followed by street vies in 2007. Google’s virtual maps have little in common with traditional analog maps. The most significant difference is that google’s maps are interactive scrollable, searchable and zoomable. The services have fundamentally changed our understanding of what a map is, how we interact with maps, their technological limitations, and how they look aesthetically.

Apps like Airbnb, Uber, or map-based food delivery-apps, Google Maps make changes to the real urban environment via market or mobility culture. All these apps function via interfaces with google maps, and without google maps, it would be unthinkable how these applications would function.

On Weckert’s website, he said, ‘Google Map Hacks’ is meant to raise questions about the level of trust people have put in the tech and how the society has adapted it. Weckert’s work garnered more than 15,000 retweets and almost 35,000 likes, a mix of skepticism, irritation, and praise.