Also called the ‘Little Island’, Pier55 stands out as the structural marvel for the world today, built with grace, durability, and a whole new concept of placemaking, it did leave people astonished. It was an entry in the competition by Heatherwick studio who collaborated with the landscape architects, Mathew Neilsen.

It will become the place of discovery for people, with lush green lawns, and green spaces will be a new addition to the skyline of Manhattan. The drift from skyscrapers to a horizontal expansion, which is such widespread, would be a breather for the people of Manhattan, who will experience architecture with user-comfortability.

The cost of this program is supposed to less, while it comes from the non-profit projects in the city of New York. The structure is heavy concrete, standing on piers, thus, calling it Piers55. The new project will lead people to new recreational space. The challenge is to build it in water, laying the foundation of a heavy structure in the lake reflects as to how far we’ve come with the technology, as well as the advancements in techniques, materials, and strength.

The topography of the man-made human is constructed with the help of the well-planned position of the piers which helps it to attain a tessellating pattern. It arose from the environmental concerns as well as aesthetic likability for the project.

The 2.4-acre park designed by Hudson Yards’ Vessel designer Thomas Heatherwick is meant to resemble a leaf floating on the water. The delicate effect, workers have been installing 132 tulip-shaped concrete pots that rest on pilings in the river. According to a story printed in NY times, each pot weighs more than 90 tons. 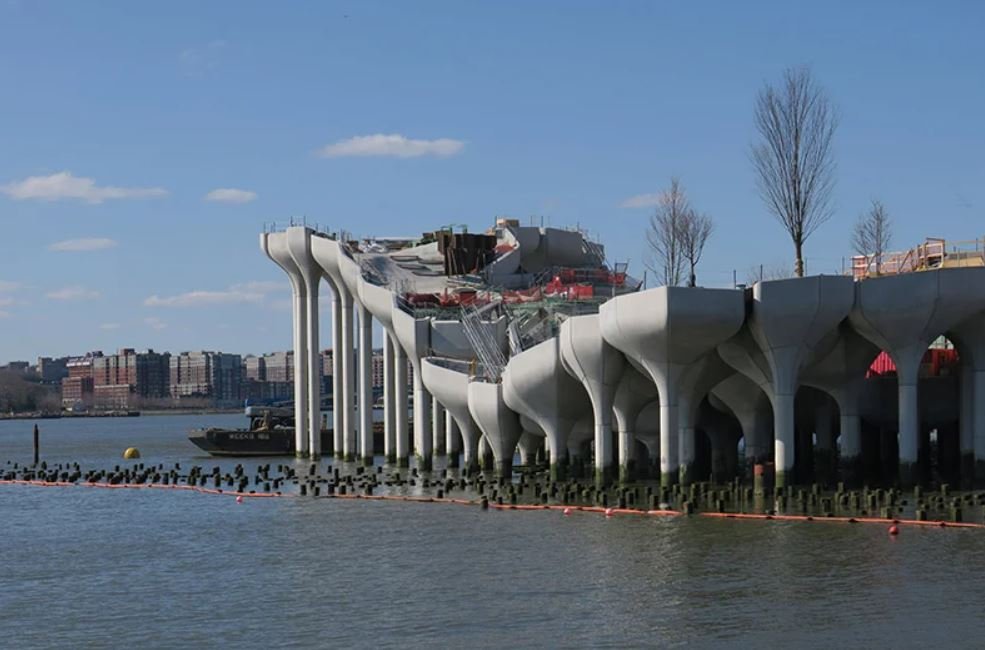 The expected visualization for the same is :

It would be a wholesome place with lush greens, trees, and plants which will be native to New York City. It becomes the responsibility of the landscape architects to put the conscious effect that creates this island to be sustainable, as the times call for today. 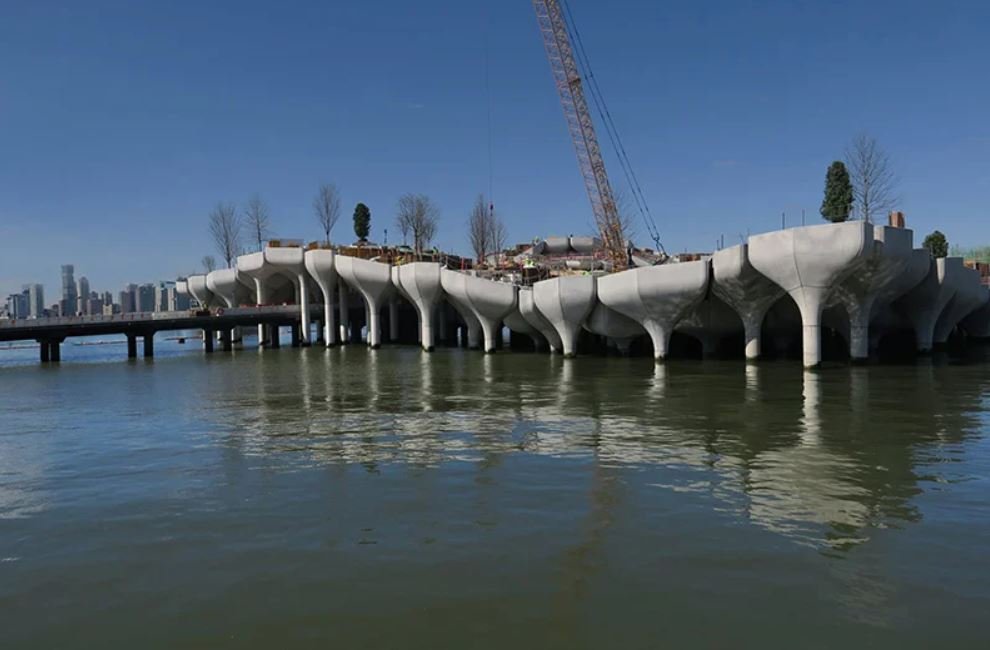 Tectonic shot several photographs from the Hudson River waterfront by the two entrances to the park. The hollow steel frame that was once part of Cunard’s Pier 54 is preserved at the southern gateway, while the second access point is a short distance to the north. 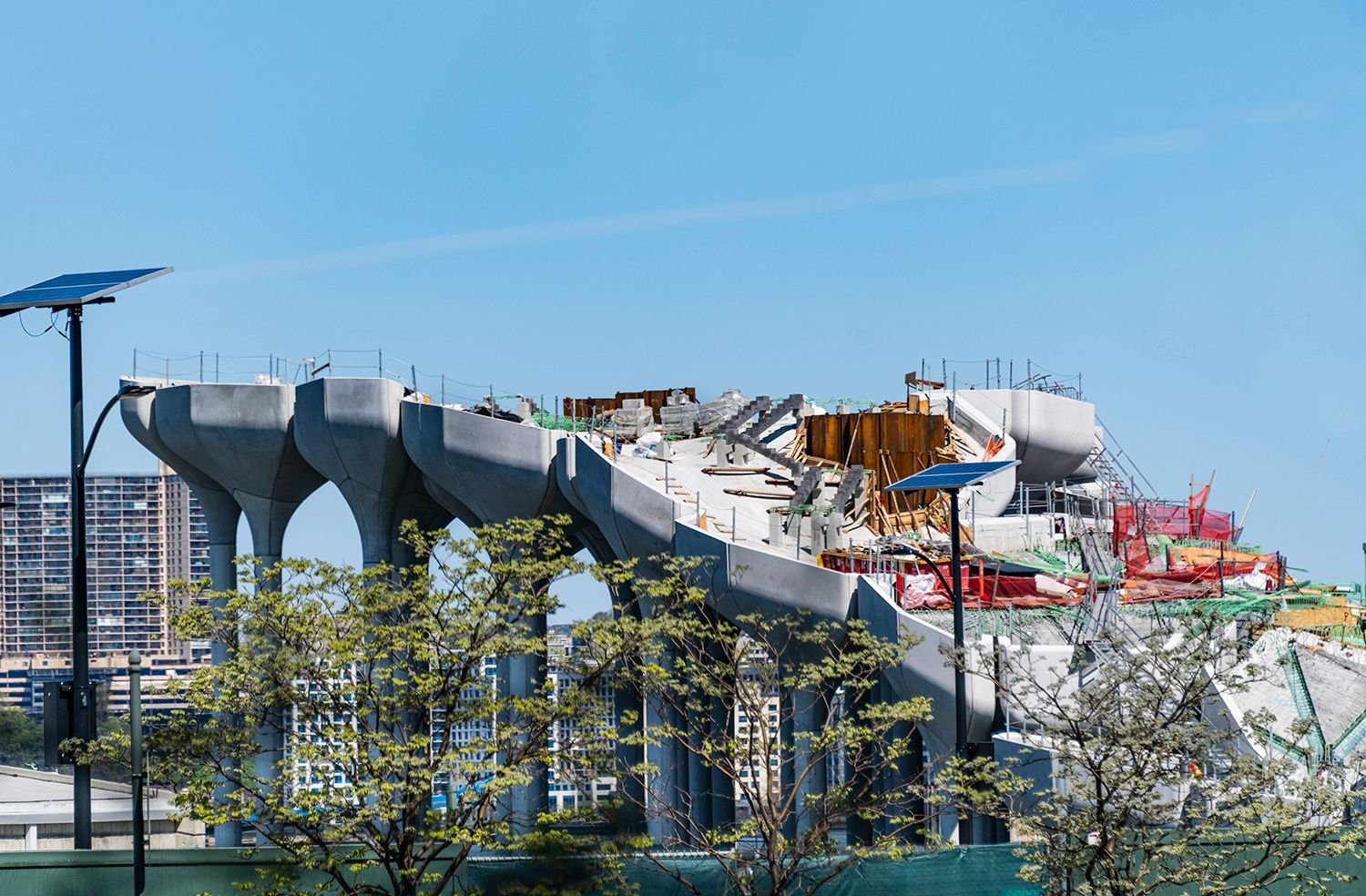 This has given hope for better placemaking ideas, rather than the time squares, small city parks, or the closed malls with mechanical ventilation, and light. It is also better for the environment as it will focus on inhabiting wild-life as well, in some form. Direct contact with nature is a necessary part to be thought about.