Amphibious houses derive their name from the class of amphibians due to their shared ability to stay on land...
872 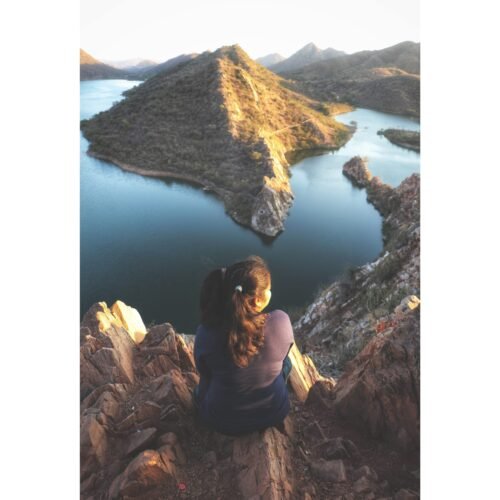 Ten years back in the United Arab Emirate, a settlement was foundedr fom scratch. The aim was to make it “the world’s most sustainable city”. Masdar City was designed to be zero-carbon and zero-waste. It is being designed by the British architectural firm Foster and Partners and relies on solar energy and other renewable resources. It presently houses a population of 2000 but intends on housing 45000-50000 people and 1500 businesses, on its completion. The final completion is estimated to be 2030.

This project is led by Masdar, a subsidiary of Mubadala Development Company. The city was envisioned to cover 6 sq.km (2.3 sq. mi), when initiated in 2006, and estimated to cost US$18-22 million. It was to, approximately, take 8 years to build and the first phase was to be ready and habitable by 2009. The construction began around February 2008 and the first 6 buildings were built and inhabited by October 2010. Due to the global financial crunch, the final completion was pushed to 2020-2025. As of now, only 3,00,000-4,00,000 sq.m has been developed and the finish line is pushed back to 2030. 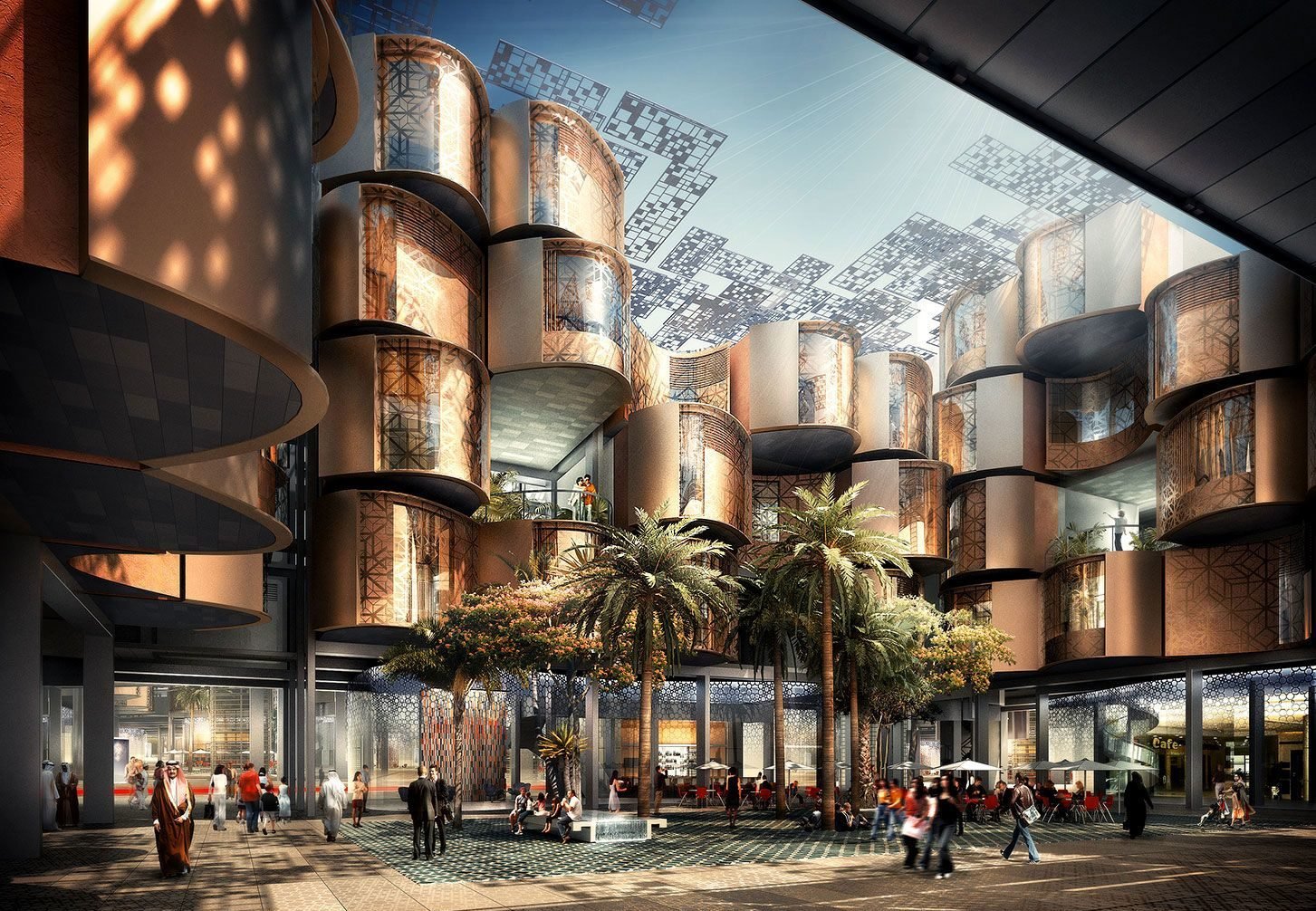 Masdar City will be the latest of the small number of the extremely well planned, specialised, research and technology-intensive municipalities that incorporate a living environment. A few others are KAUST, Saudi Arabia and Tsuka Science City, Japan. 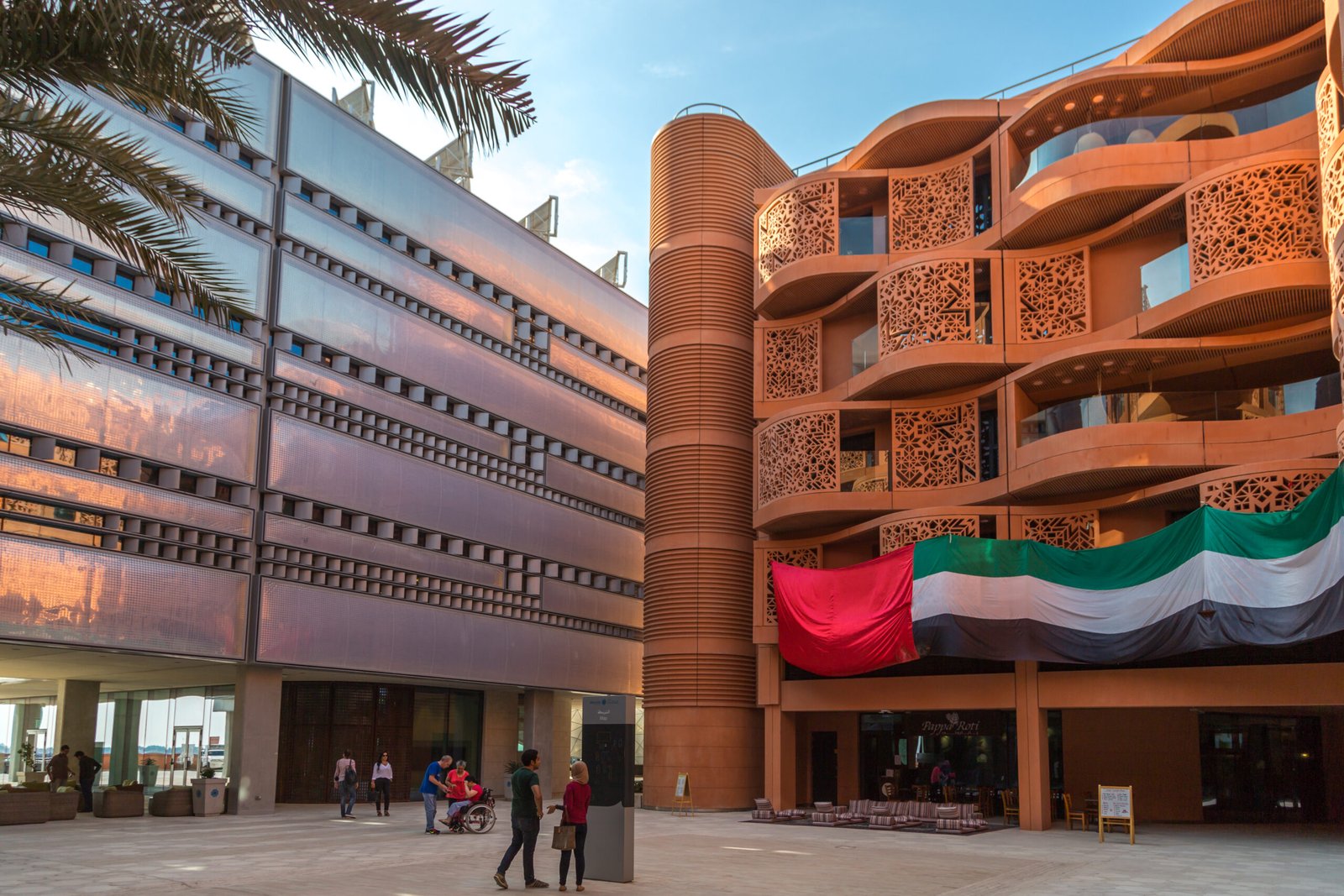 Masdar is sustainable mixed-use development. It is designed to be friendly to pedestrians and cyclists. The walls of the city are terracotta with arabesque patterns. From far away, the city resembles a cube.

The temperature within the city is around 15-20 degrees Celsius, thanks to the unique construction style of the city. This temperature is quite lower than the outside desert. The city has a 45m high wind tower, constructed on the lines of traditional Arab designs, which sucks the air from above and pushes a cooling breeze through the streets of Masdar. The site is raised slightly above the surrounding land to create a cooling effect. The buildings are clustered together to create a play of shadows and shield the streets from the harsh sun.

The initial design aimed at using public mass transit and personal rapid transit (PRT) systems and banned automobiles. The absence of motor vehicles coupled with Masdar’s perimeter walls, designed to keep strong desert winds out, help the narrow-shadowed streets funnel cool breeze through the city. In October 2010, PRT was announced to be not expanding beyond the pilot scheme due to the high costs included. Under a new revised design, within the city, public transport would rely on methods other than the PRTs. The transport system will be using a mix of electric and other clean energy vehicles for mass transit within the city.

Tenants and the Population

The Masdar Institute of Science and Technology is a graduate-level research university, which focuses on alternative energy, environmental sustainability, and clean technology. It was one of Masdar City’s first occupant. The design of the campus emphasises flexibility, the use of traditional architectural elements, and modern materials to provide for an optimised combination of natural lighting and cooling that minimise energy needs. The institute’s building uses 51% less energy and 54 % less potable water than any traditional building.

Masdar City will host the headquarters of the International Renewable Energy Agency, commonly known as IRENA. As of May 2013, construction of IRENA’s headquarters was underway.

The Siemens Regional Headquarters is built in the Masdar City. This LEED Platinum building is one of the most energy-efficient buildings in Abu Dhabi.

The original plan was, for the city, to have its own grid to reach full carbon neutrality. However, later when hooked with the public system, they realized that the city would never reach net-zero carbon levels. Masdar is powered by a 22-hectare (54-acre) field of 87,777 solar panels with additional panels on roofs. There are no light switches or water taps in the city; movement sensors control lighting and water to cut electricity and water consumption by 51 and 55 percent respectively. Gerard Evenden, the lead architect, says that the original plan for Masdar called for powering the entire city through on-site methods such as rooftop solar panels.

Blowing sand has been a problem for its solar panels, so Masdar has been working with other companies to engineer surfaces with pores smaller than sand particles to stop them from sticking on the panels. Scientists at the Masdar Institute are also working on coatings that repel sand and bacteria for use on solar panels and in other applications.

Water management has been planned in an environmentally sound manner as well. Approximately 80 per cent of the water used will be recycled and wastewater will be reused “as many times as possible”, with this greywater being used for crop irrigation and other purposes.

The exterior wood used throughout the city is palmwood, a sustainable hardwood-substitute developed by Pacific Green using plantation coconut palms that no longer bear fruit. Palmwood features include the entrance gates, screens and doors.

Some sceptics are concerned that the city will only be symbolic for Abu Dhabi, while we have some others would have us focus more on retrofitting existing cities with sustainable techniques rather than constructing completely new cities. It could either become just a luxury development for the entitled. The major concern is to make existing cities more sustainable and to make these solutions available to all.

I would like to end by saying, “A great concept and the zero the world needs.”