INTRODUCTION:- A  Password was Breached of a Famous Online Game Company ZYNGA.inc on 2nd September 2019. ZYNGA is a Leading...
31

Ameya Hivarkar
Being a 18-year-old, Ameya is interested to learn new things ranging from gaming to technology. He is passionate about keeping you all updated with his knowledge about new gaming trends and technology globally. He is currently contributing to BLARROW as a Content Writer.
Table of Contents
1 Introduction:
2 Storyline and Gameplay:
3 Combat and Bosses:
4 Realms:
5 Verdict:

The most awaited game of the year has finally launched, which has created a place in the hearts of all God of War fans. As the game was released all over the world, lots of fans pre – purchased it and there were lots of them waiting in queue outside the PlayStation store to get the game and explore the new War of God.

Must read – God of War : Ragnarök

God Of War: Ragnarök is an upcoming action-adventure video game played in single-player game mode, which is developed by Santa Monica Studios and will be published by Sony Interactive Entertainment. The game is Directed by Eric Williams, produced by Cory Barlog, Written by Matt Sophos and composed by Bear McCreary. The game is the instalment of the series God of War, and it is scheduled to be released on 9th November 2022. It is available for PlayStation 4 (PS4) and PlayStation 5 (PS5).

God Of War: Ragnarök is an upcoming action-adventure video game played in single-player game mode. It contains very amazing and realistic graphics, which is and bigger evolution in the series of God of War. In this the player controls the character named Kratos who is going on an adventure with his so-called son named Atreus to uncover the truth and set out to find answers. In the game there are various changes made in Kratos such as upgrading his fighting skills. And like Kratos, Atreus has also developed a new power of summoning a Mountain Goat and charging it onto the enemy. The game also contains a lot of new and returning characters including flying dark Elves Centaurs, giant alligator-like monsters and the soldiers from Asgard teleporting from right there, there will also be new monsters and enemies in the game.

Fimbulwinter is drawing to a close, and it is prophesied that Ragnarök will begin once it comes to an end. Kratos is going on an adventure with his son named Atreus (identified as Loki) to uncover the truth and set out to find answers, and search for the giant god Norse God of War Týr, who was previously believed to be dead. In their journey they come across various Realms mentioned in Nordic Mythology, all the realms are filled with powerful bosses and army trying to stop Kratos. 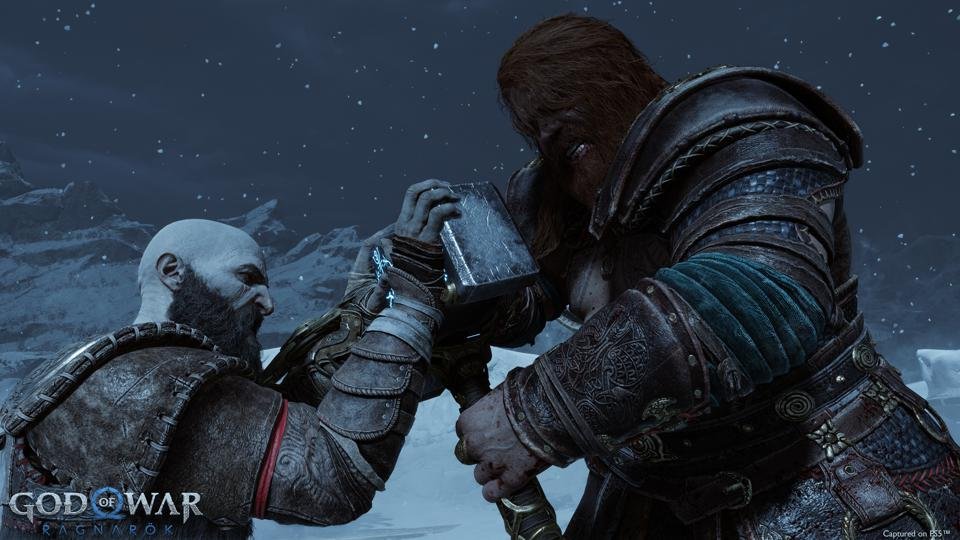 There are lots of combat changes made in God of War : Ragnarök which are far different form previous games. In this are also a few elements added and changes made in Kratos weapons. And with this there are also some new boss battles added and as the title contains Ragnarök, the game is featuring God of Thunder aka Thor, Odin and many more bosses in game.

With this, Kratos weapons have also been upgraded, Leviathan Axe can infuse it with ice and attack enemies with the Frost Awaken. The heavy blades of the axe cut open the enemy easily and it launches in the air lodging it to anything coming between its paths, Blades of Chaos whip around in every direction, delivering a clacking fiery pain to every face they meet, they can be used to grapple from one end to another, and get stick on to enemy and killing them in air, Dauntless successfully parrying at the last second gives players the ability to cast a high damage counter, Stonewall this shield fires off a kinetic blast after the player blocks off a certain amount of damage from enemies.

Enemies can now perform interruptible attacks which can be signified by blue ring on the head which can be easily dogged but at a perfect time. With these there are plenty of more additions in combat, but I won’t hurt the sensation of discovering them by yourself. 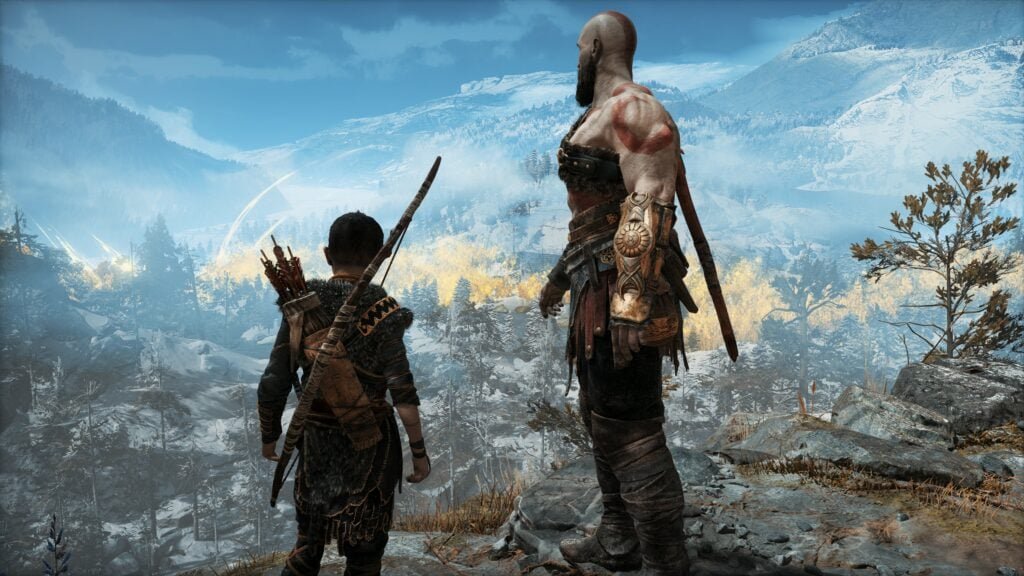 There are in total nine Realms mentioned in Nordic Mythology that you’ll get to see in God of War Ragnarök. During the main journey, you’ll be able to explore all of the six realms from the first game and three are newly added. Now that Fimbulwinter is here, all of these locations will be deadlier and filled with new monsters, so even the ones you’ve been to before will feel brand new again. The Realms are Midgard, Svartalfheim, Niflheim, Jotunheim, Alfheim , Muspelheim, Vanaheim, Helheim , Asgard.

All the Realms are more challenging and are equipped with large armies and deadly boss battles. With this there are various puzzles placed in the map which need to be solved to move further. There is a sustainable collection of collectibles such as Odins eye, puzzle quest, Artifacts and much more which can be found in every corner. With all this the game also features side quests which can be performed by the player whenever the want. 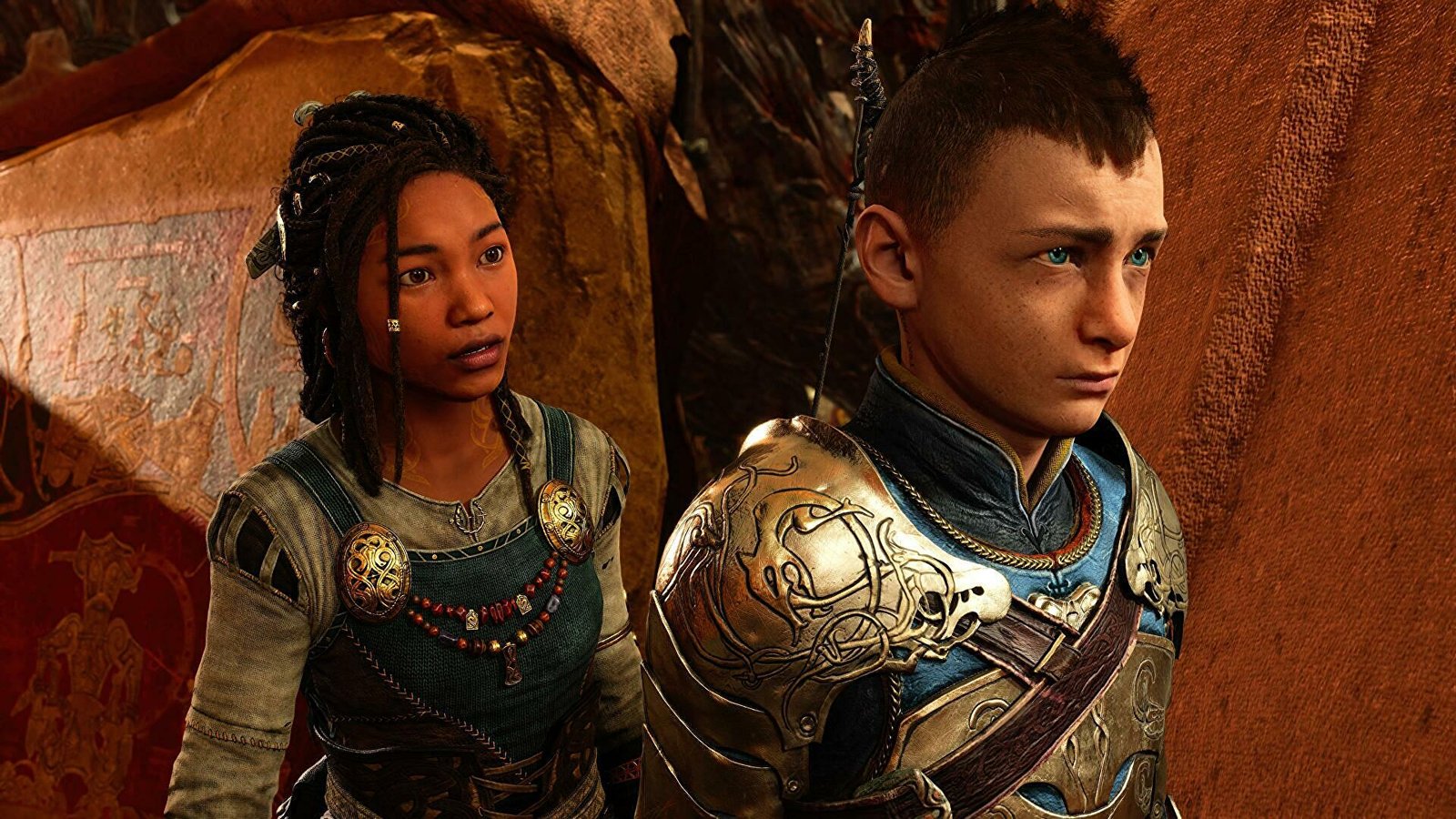 God of War : Ragnarök was the most awaited game and now it here. This is game melts Action and Adventure together to create a new unforgettable Norse saga. It is full of mysteries with incredible writing Pitch perfect Performances, Knock – out actions. It is a complete work of art from top to bottom. God of war : Ragnarök is all mighty achievement.