The Apple WWDC 2022 day one is over, and it has brought various new features and updates to all the Apple devices; Let’s look at the upgrades in Apple devices. 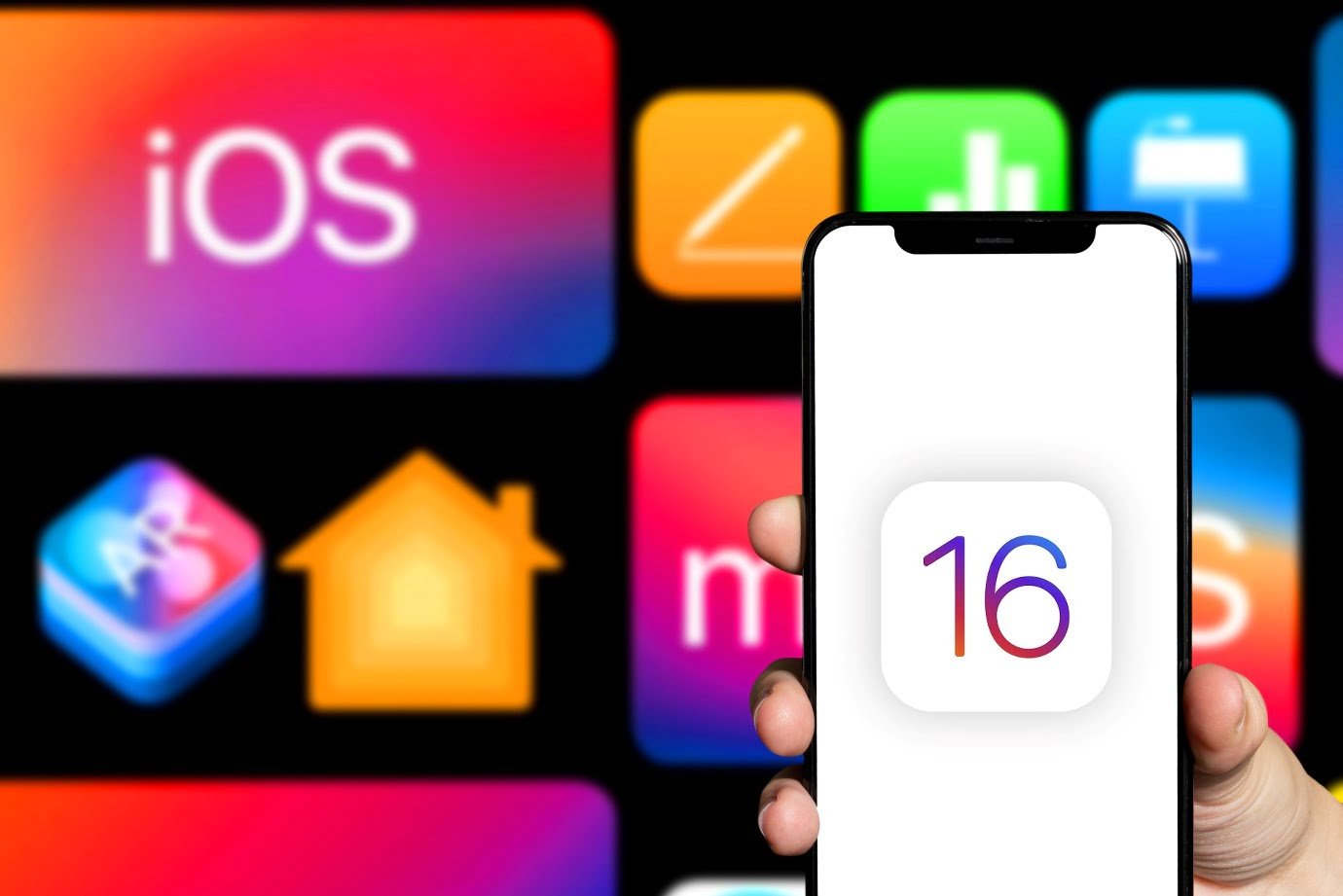 Most people in their day-to-day life use iOS, and good news for them as well for you, apple has brought up new operating system for iPhone named iOS 16.
As per name, it is an upgraded and way further OS from other versions. Which offers new intelligence, sharing and communication features that are going to enhance our use of iPhone. And with these there are more chances in OS such as new lock screen.
You can say bye to your old iPhone lock screen, because the new one is very cool. The lock screen features customizing options, by which you can customize our lock screen by adjusting image, changing font of clock, adding customized widgets and many more. And not only one you can make as many lock screens you want and can switch between them very easily.
With lock screen, the apple has also added three major upgrades in apple chat function, now you can edit sent chat, immediately delete it or and mark any chat to reply later.
And after all these, apple has also updated apple dictation, now you can use speech to text function which is very accurate and easy to use. 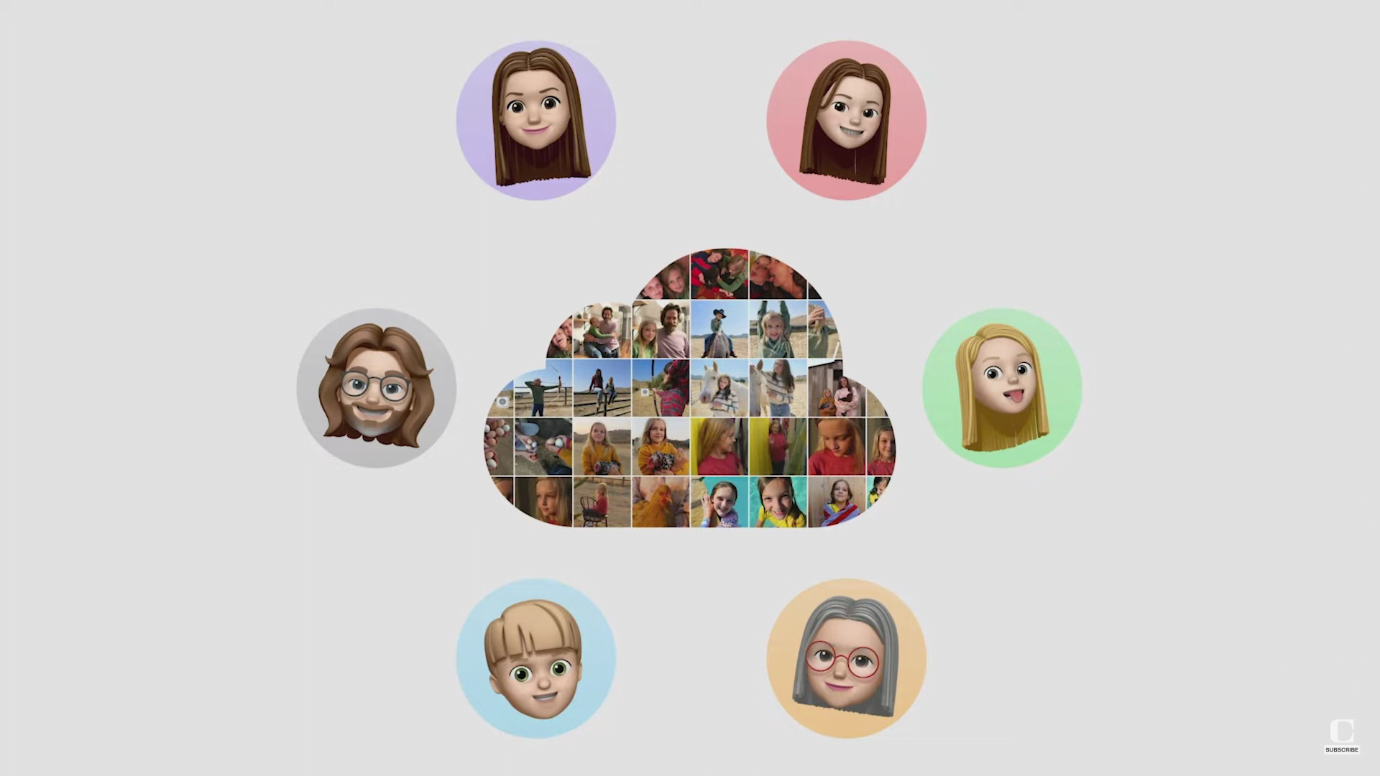 The new share photo library gives you a function of sharing your photos in your group just by making one on iCloud. You can create a group of up to five participants and enable sharing option. This gives you an option of sharing all the photos form your gallery of some selected from there is also feature of connecting your camera, due to which you can send photos to your group just after clicking them. As the feature gives everyone an equally access to gallery, any changes made on photos can be accessed by everyone. Its just a kind of photo server. 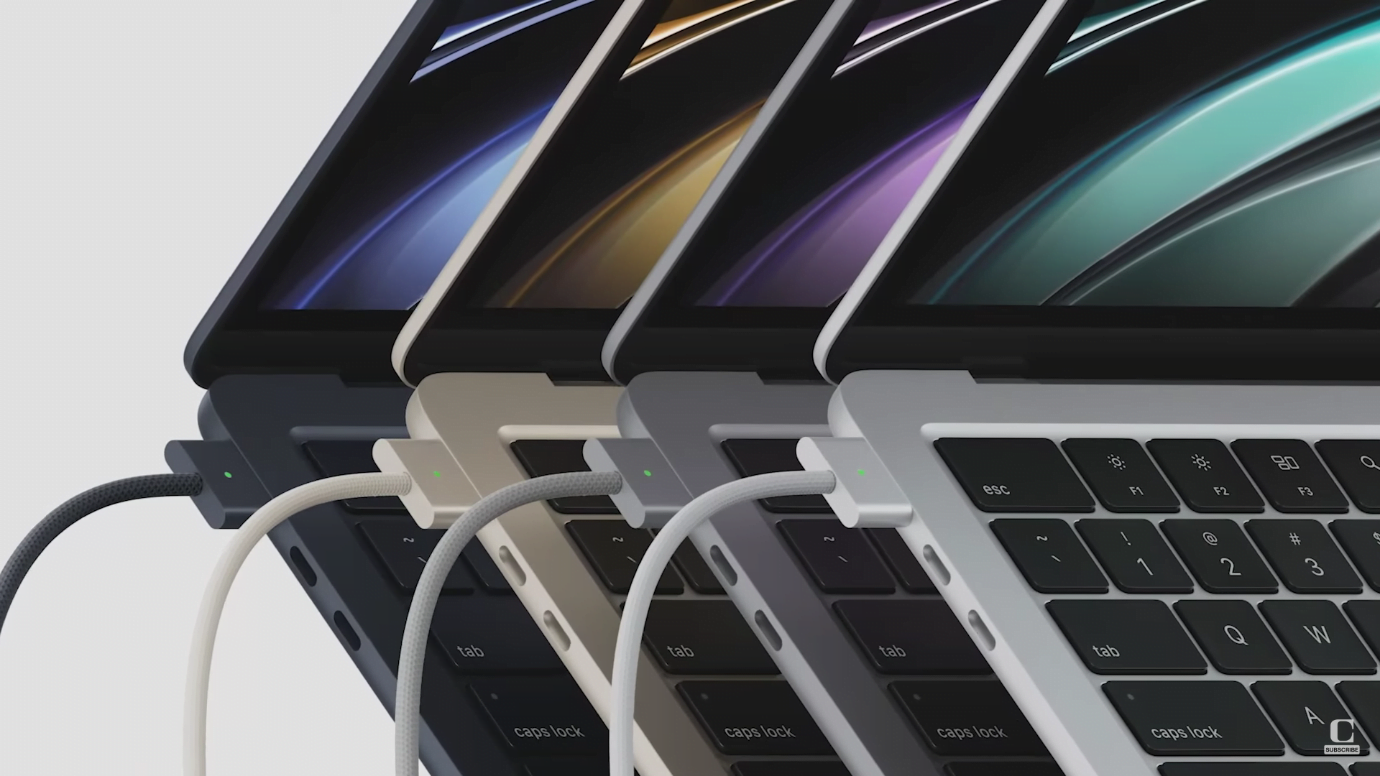 The new MacBook Air takes fully experience of user to the next level. It is less than half inch in height and weighs up to 2.5 pounds and comes in four brilliant colours. And very important, the mag safe is back in this Air dedicated for charging with two thunderbolt ports set free for data transfer or connecting various accessories. There is also an inbuilt audio jack to plugin your headphones or greater quality of sound. The display used in the Air is Liquid Retina Display which give high video quality and is sized for 13.6 inch, with a notch for a 1080p webcam with 2x resolution and low light performance. And with this the new MacBook Air comes with a M2 chip which takes the performance of this machine to next level. 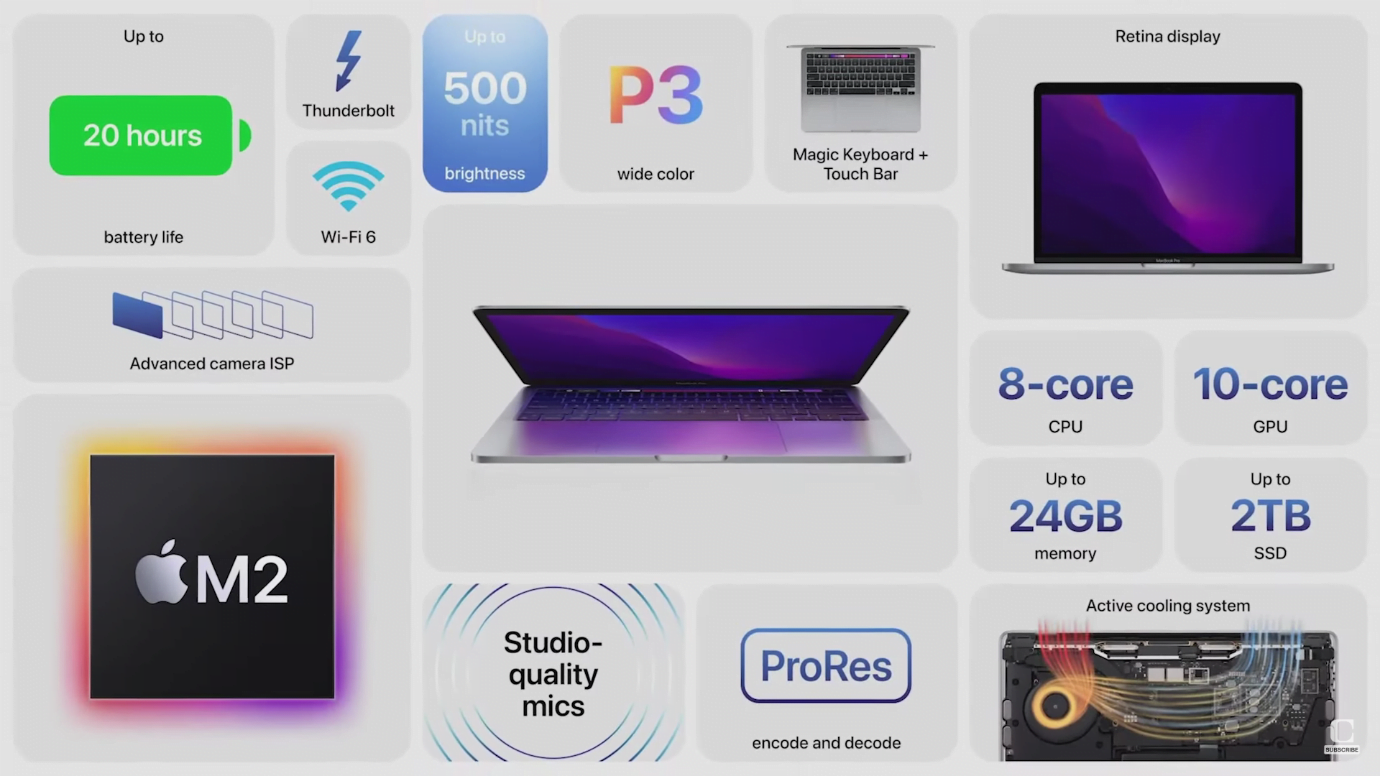 M2 chip also comes with other Apples most best selling MacBook, which is The MacBook Pro. The users love this laptop’s performance and compact design, but now it has arrived with 2x performance with the help of M2 Chip. Due to a active cooling system, it is able to sustain the high performance. And due to M2 chip, it gets a 24 GB of unified memory, which make working with multitasking and asset building very smooth and easy. And you will be able to create all your video project with 3x speed using the MacBook. And at last, the MacBook comes with a 13-inch display and a powerful battery, which give you 20 hours video playback time. 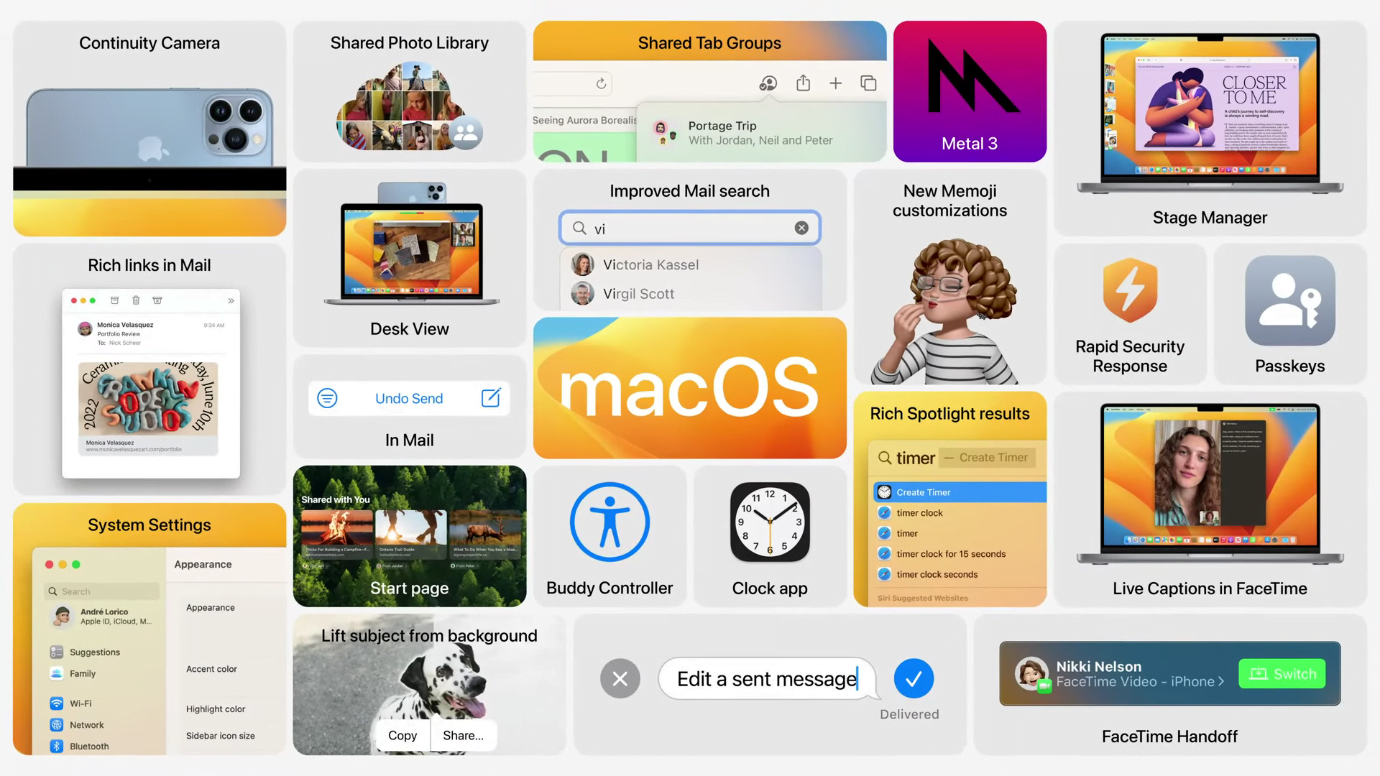 MacOS Ventura enriches so many ways we use our Mac. It comes with a new stage manager feature, which organizes all the tabs on your window and displays only the tab you are working on. And with spotlight you can launch any app or search anything on browser and peak at the result with a tap or moving your curser on it, and with the new feature you can also access any picture from your device or other. The Apple Silicon has launched Metal 3 which will elevate your gaming performance to next level, Metal 3 uses Metal Fx Upscaling which enable developer to easily render and uses shaders option to develop the game easily, due to which more high-quality games could be make with more fps to play with Metal 3 it will be a great choice for gamers. And with this, Apple came up with a new feature called Continuity Camera; now, let’s see what Continuity Camera is. 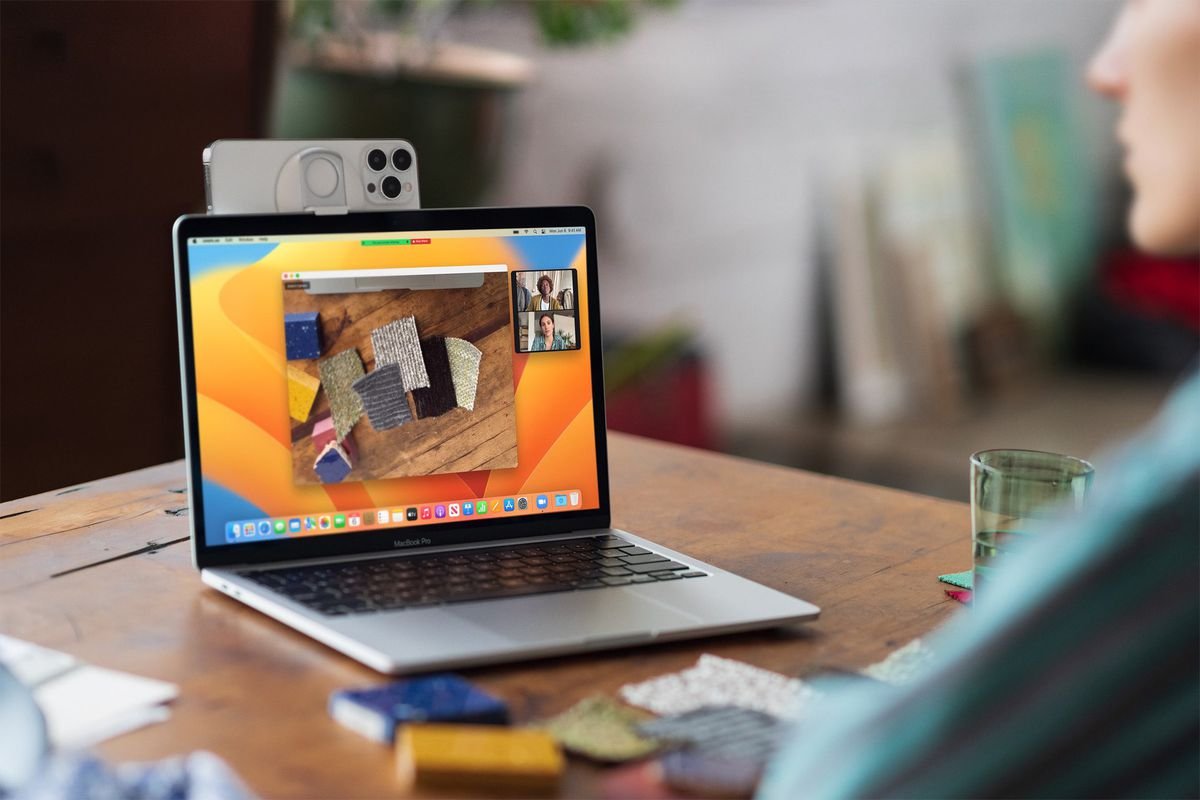 Due to the pandemic, we have spent a lot of time in front of our webcams by attending online lectures and business meetings for lots of facetime videos, but in this we didn’t get a good quality video. Due to this, apple has launched Continuity Camera. In which we just need to simply attach a stand to your iPhone and attack it at back of your MacBook and after launching any video calling app MacBook will detect your iPhone and will use its camera as your webcam. And because it is iPhone, there are various features such as the Center stage, which will keep you in the center of the screen while moving slightly. With a new feature named as Desk view, which allows you to show the work going on your desk while keeping you in picture, it uses iPhone’s ultrawide camera with lota of video processing. 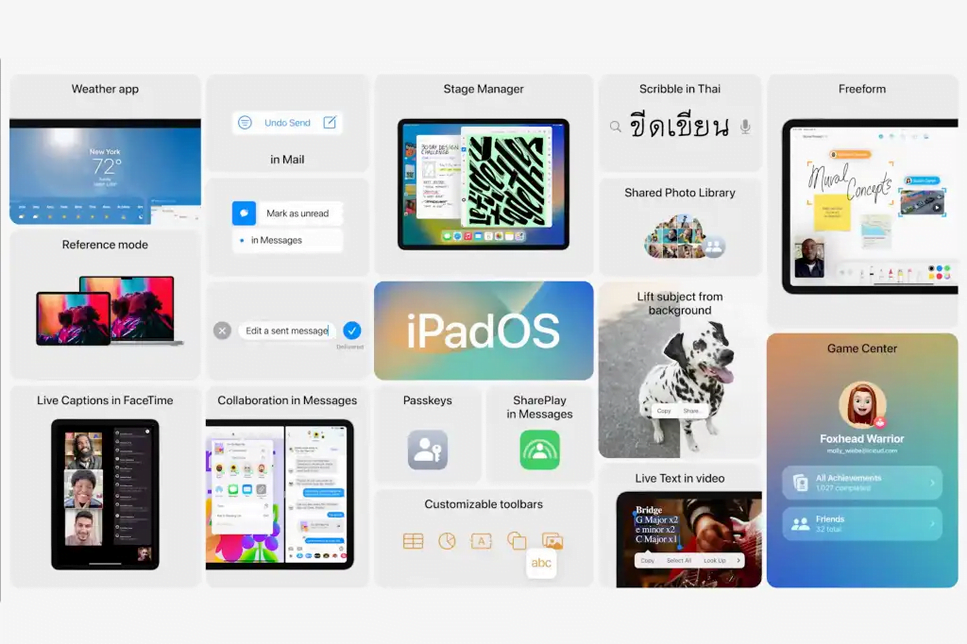 The updated iPhone software coming in the fall introduces a redesigned lock screen that gives you more customization options. You’ll also be able to include widgets on the lock screen. Messages gives you the ability to edit and even recall texts; you’ll be able to watch videos using Share Play from within Apple’s messaging app, too.
Wallet, Maps and Photos all see new features and enhancements, but the biggest change will be that Car Play is working with car makers on a revamped interface due next year.
The iPad supports multitasking through Stage Manager, too. A Freeform app creates a shared whiteboard to help with group collaboration and Apple is touting boosted gaming features on the iPad.

There are various newer launches revealed by apple, which will be covered further. So don’t forget to give your reviews about this article in comment section. I have tired to cover all the main key points of the first day of WWDC 2022. And give you a lot of information some might be left but it was not important as given above.

How Blockchain Games Are Revolutionizing the Gaming Industry