YouTube Vanced is a popular YouTube community modification, which is shutting down after the application developers started getting legal threats from google itself. This project is set to be shut down in the coming days, and the developers will pull down all the downloading links.

As YouTube ceases, a letter to the software developer said that the Vanced software logo should be changed and all the links related to YouTube should be pulled down.

After the notice came, the official Vanced Twitter handler tweeted, saying, “Vanced has been discontinued. In the coming days, the download links on the website will be taken down. We know this is not something you wanted to hear, but it’s something we need to do. Thank you all for supporting us over the years.” 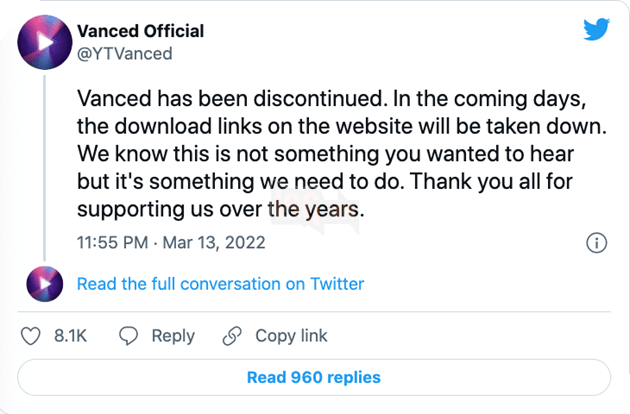 You all might be thinking, what is YouTube Vanced? Let me tell you; YouTube Vanced is a third-party app developed by the Vanced community to get rid of several YouTube restrictions and changes. As an added feature, it blocks all ads, including the sponsored content.

The official YouTube app has not been well-received by Android enthusiasts for various reasons. As, Vanced gives users to customize their experience in YouTube, such as the user can change YouTube entirely to a dark theme, removing ads and sponsored content to watch add free movies, several video player-related options, bringing back the dislike button, the users could also remove YouTube shorts and many more.

Vanced YouTube contains all the features included in YouTube premium. The Vanced YouTube would give it to you for free. The YouTube Vanced app also allowed users to play videos in the background and block all ads without paying a dime – both of which usually require a YouTube Premium subscription which starts at ₹129 per month. 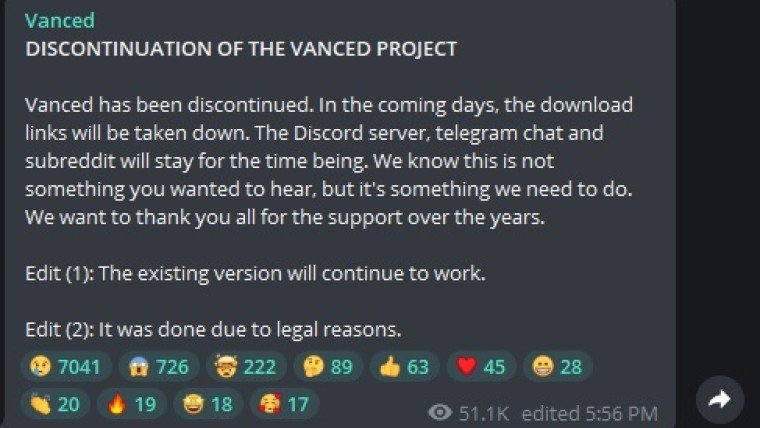 You will be still able to use YouTube Vanced if you’re an existing user. If not, you can download it as soon as possible, because the link will be pulled down in a few days, if not updated you can also update it for the last time before the updating links get deactivated.