What Traditional Teaches To Contemporary Architecture?

The upcoming designs are forgetting the knowledge of traditional practices and lack in sustainable and organic characteristics. Merging of these two styles also helps in creating a beautiful interior with an excellent interplay of natural lights and shadow, created with elements of the structure. Many attempts have been made in the past to fuse the respective styles but were failed miserably. It’s mostly because of the lack of judgment and creativity. This kind of design needs to be handled very carefully maintaining the composition and context of the region. Too much tradition or too less of the interaction between design elements is what leads to ‘bad design’. It’s all about creating a balance and not repeating the already existing styles as was done in neo-classical architecture.

Another way of maintaining history is through adaptive reuse. Bringing old buildings into life with today’s efficiency, safety standards, proper planning, and functioning is called adaptive reuse. Sometimes it is only possible to preserve outer structure but nevertheless it can still result in beautiful fusion architecture. 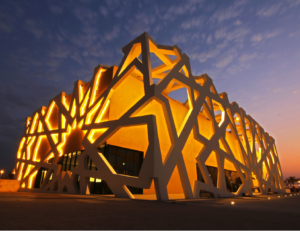 The project weaves together past Islamic patterns with the current trends of architecture evolving into a very unique environment for the visitors at the science center. The building symbolizes today’s art and science with the traditional geometry, representing nature and infinity. The building is divided into two sections: the geometrical stand-alone concrete shell encompassing the inner structure. The shell structure is derived from the Qarawiyyin Mosque and University. It is used to display temporary exhibits and helps in maintaining the inner temperature of the structure.

The other interior section has a huge main entrance with highly defined geometrical cut patterns. The Center of the building has two staircases which are designed in a way to give an appearance of infinity. The first floor comprises the main exhibition of artifacts from around the world, including an active sundial fitted into a geometric shell to tell time. The ceiling has beautiful architectural patterns taken from the mosque, all highlighted with lights. 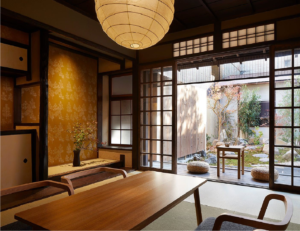 The original house was 100 years old. It is a timber structure in a typical form of Kyoto house, the owner intended to convert it into a beautiful homestay. The challenge was to preserve its traditional value and make it as modern as possible, to meet the demands of today’s lifestyle. This lead to the formation of a hybrid style of architecture.

The design has a modern style tunnel at the main entrance which serves as an interacting space between the courtyard and the street, expressing the traditional essence of traditional Kyoto culture of courtyards. It also serves as an exhibition area to display different kinds of old Japanese art. Timber from the old structure was reused to refurbish the interior of the housekeeping its historical emotion. The backyard was resigned keeping the original maple tree and the stone landscape. The materials were chosen keeping the original natural texture and color patterns. 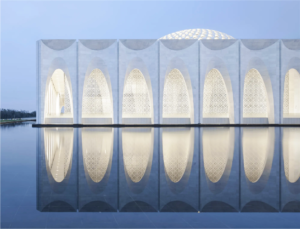 The project was associated with local authorities in order to encourage additional cultural and architectural development in the area. The structure is a perfect blend of Islamic and modern architecture. Based on the architectural concept of the Islamic mosque, the building is a combination of spatial structure and advanced architectural material. The facade has a traditional style of vaulted arches, rising to the top of the building creating elegant curved lines.

The dome is constructed with half-open shells, through with the natural light penetrates inside the building and during the night the interior lights illuminate the space around the center creating a panoramic view.

Traditional buildings have a lot to teach in modern architecture. It refines the identity as a concept and impacts of the global environment on contemporary architecture. Technology tends to standardize architecture, make it uniform and better, which might conceal the achievements of the past. But still, the traditional architecture will always provide possibilities for improvements.

Previous article
Concrete Masterpieces By The Master!
Next article
Interaction Of Architecture And Photography