Gothic architecture, every time someone mutters this all I can think about is tall, elaborate buildings with ornate decorations, buttresses, pointed arches, tracery and the oculus. Whereas my friend, on the other hand, can only think of old, dark and creepy castles that go bump in the night. Gothic architecture is all this and so much more. A little peek-a-boo into the ins and outs of my personal favourite architectural style. 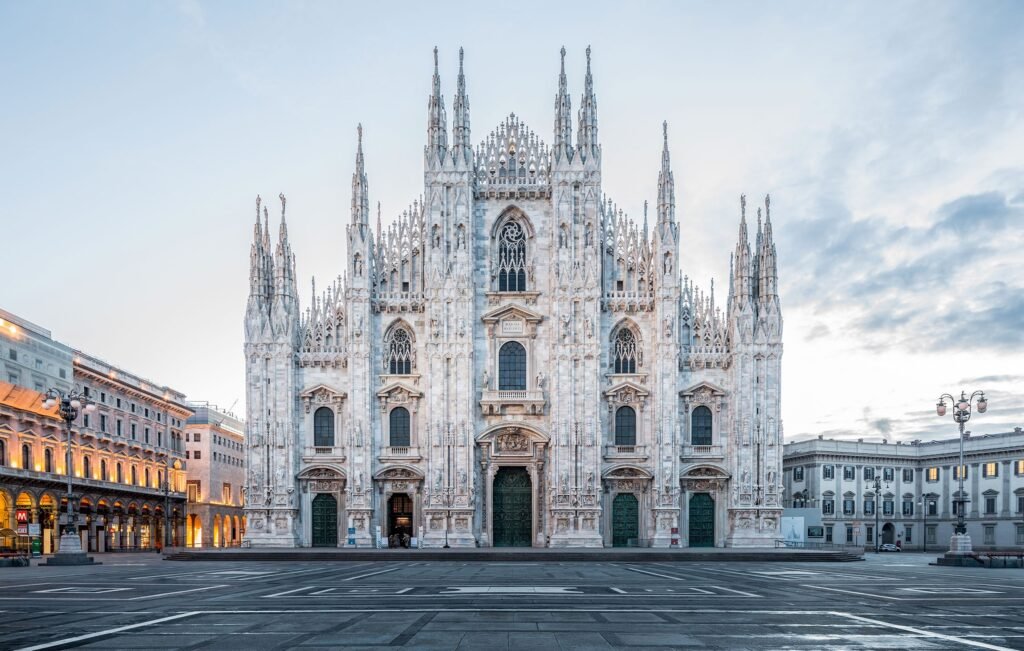 Gothic architecture is a substyle of the medieval period in art history. It was prominent in the northern parts of Europe from the mid-12th century till the 16th century. The word Gothic was derived for “Goth”, introduced in 1500 by the Italian architect and artist, Giorgio Vasari. He meant to be referring to the Germanic tribe of Goths, considered to be an inferior barbarian culture. According to him, Gothic architectural style was nothing but “monstrous and barbarous” “disorder”. 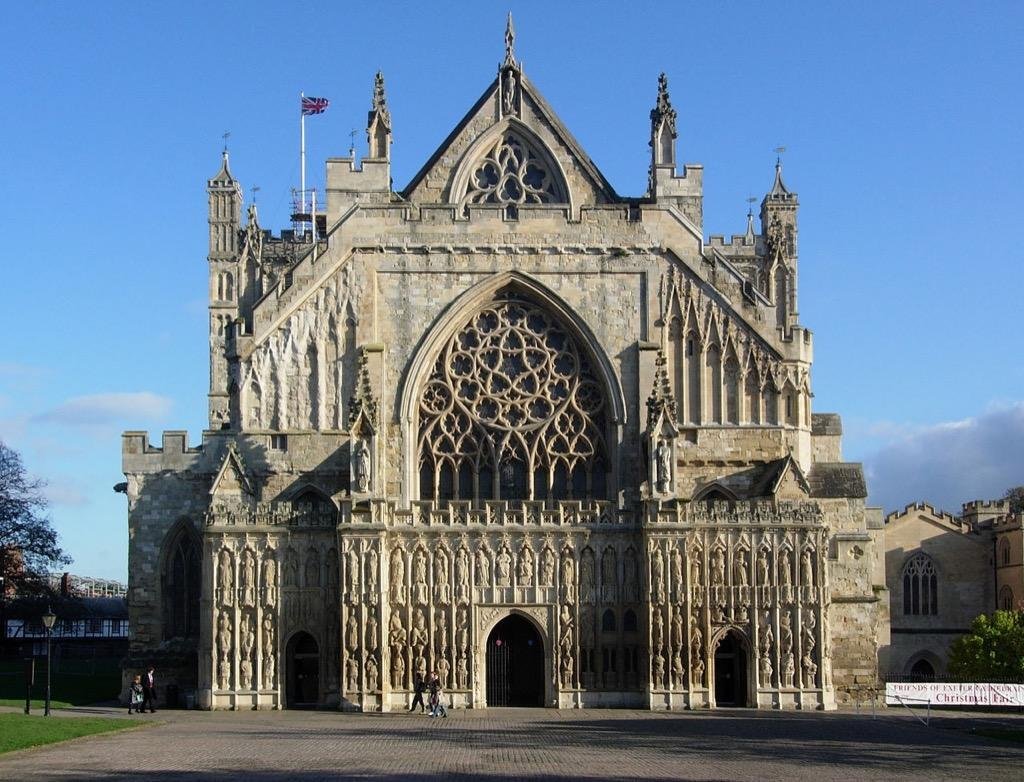 However, the gothic style didn’t completely die out in the 16th century. It lived on in the form of cathedral buildings, at Oxford and Cambridge and in churches. In the mid-18th century, we saw a rise of Romanticism. It is an increased interest and awareness of the Middle Ages among some influential connoisseurs creating a more appreciative approach towards medieval arts, architecture, royal and noble personages, stained glass, and late gothic manuscripts. A lot of gothic arts, tapestry and metalwork were also not considered to be barbaric and crude. 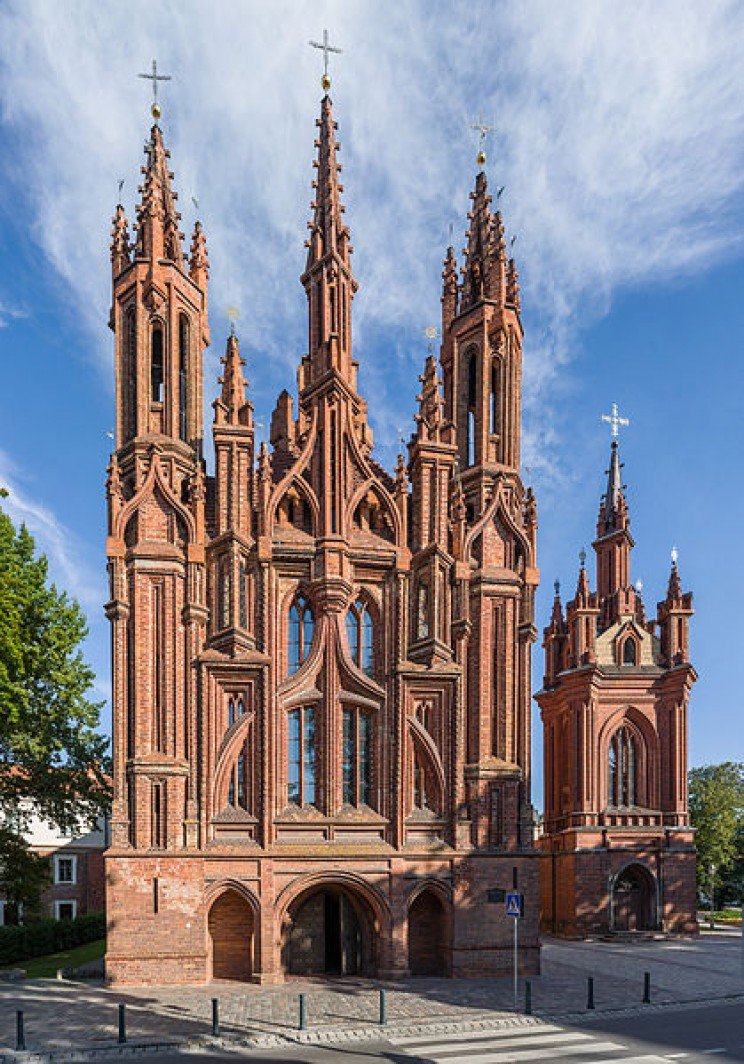 This led to Gothic revival (also known as Victorian Gothic, Neo-Gothic, Gothick), which became popular in the Western world in the late 1740s. this movement gained momentum in the late 19th century when increasingly serious and learned admirers of neo-Gothic styles sought to revive medieval Gothic architecture, in contrast to the neoclassical styles prevalent at the time. It is very commonly associated with Romanticism. In the mid-1930s, buildings were built in the style of the Middle Ages and later expanded to embrace the Neo-Gothic movement. 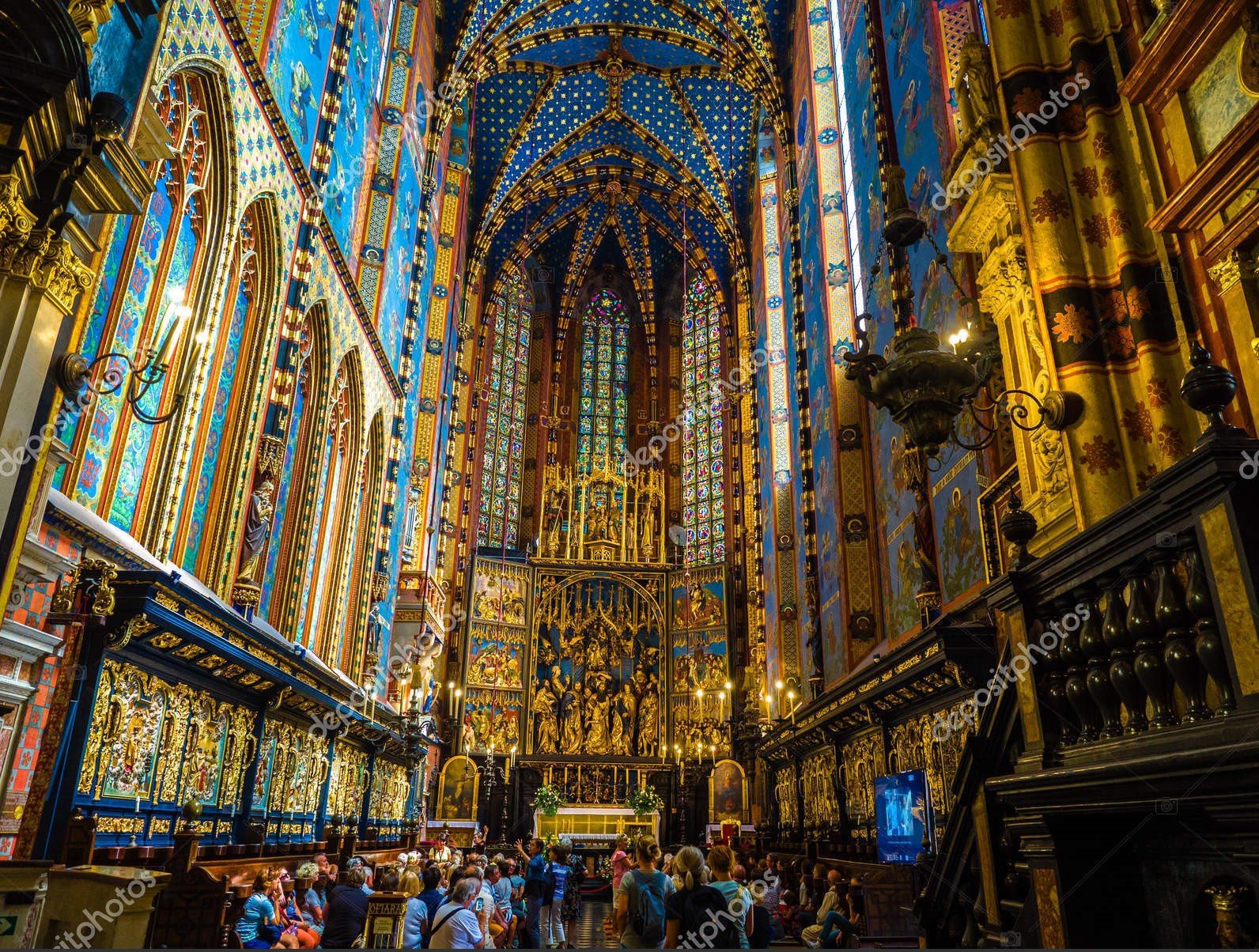 The Gothic style dictated the use of structural members in compression, leading to tall, buttressed buildings with interior columns of load-bearing masonry and tall, narrow windows. But, by the start of the 20th century, technological developments such as the steel frame, the incandescent light bulb and the elevator made this approach obsolete. Steel framing supplanted the non-ornamental functions of rib vaults and flying buttresses, providing wider open interiors with fewer columns interrupting the view.

Some architects did persist on the use of the Neo-Gothic tracery as ornamentation to an iron skeleton underneath. Some saw the Gothic tradition of architectural form entirely in terms of the “honest expression” of the technology of the day, and saw themselves as the rightful heir to this tradition, with their rectangular frames and exposed iron girders. After all of this, the style still exerted its influence and stuck around. In the second half of the 20th century, Giles Gilbert Scott’s Liverpool Cathedral and the Washington National Cathedral (1907–1990) (pictures below in the same order) were some the massive projects built. Ralph Adams Cram, a leading force in the American Gothic, said “the style hewn out and perfected by our ancestors [has] become ours by uncontested inheritance.” 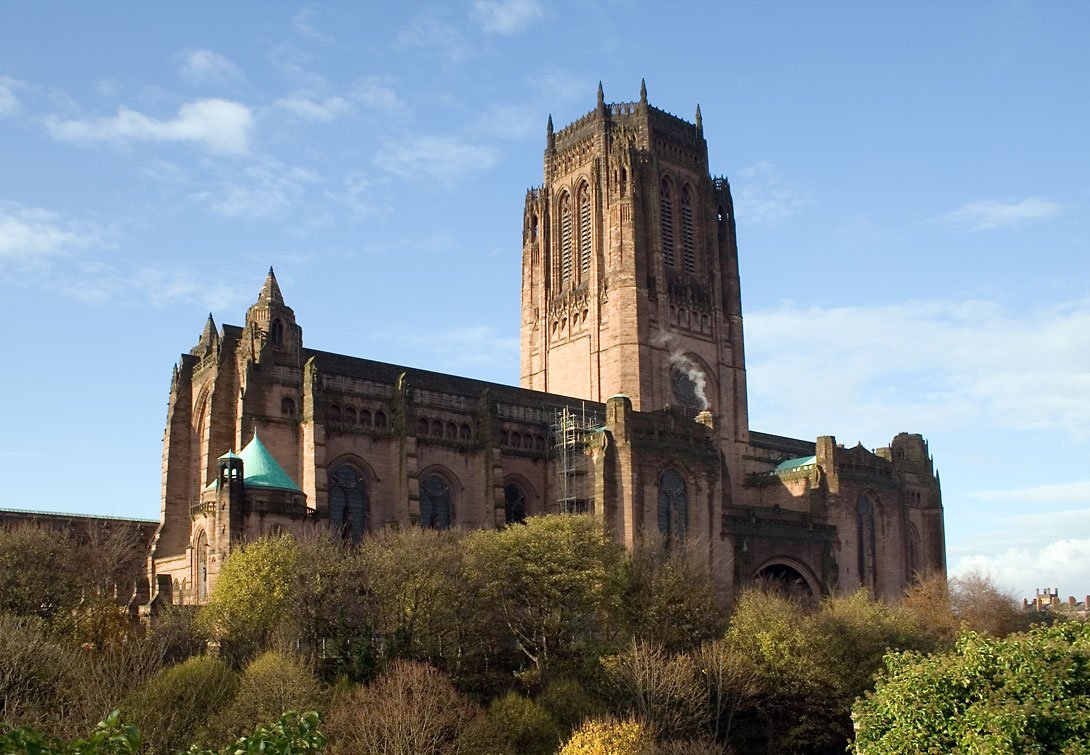 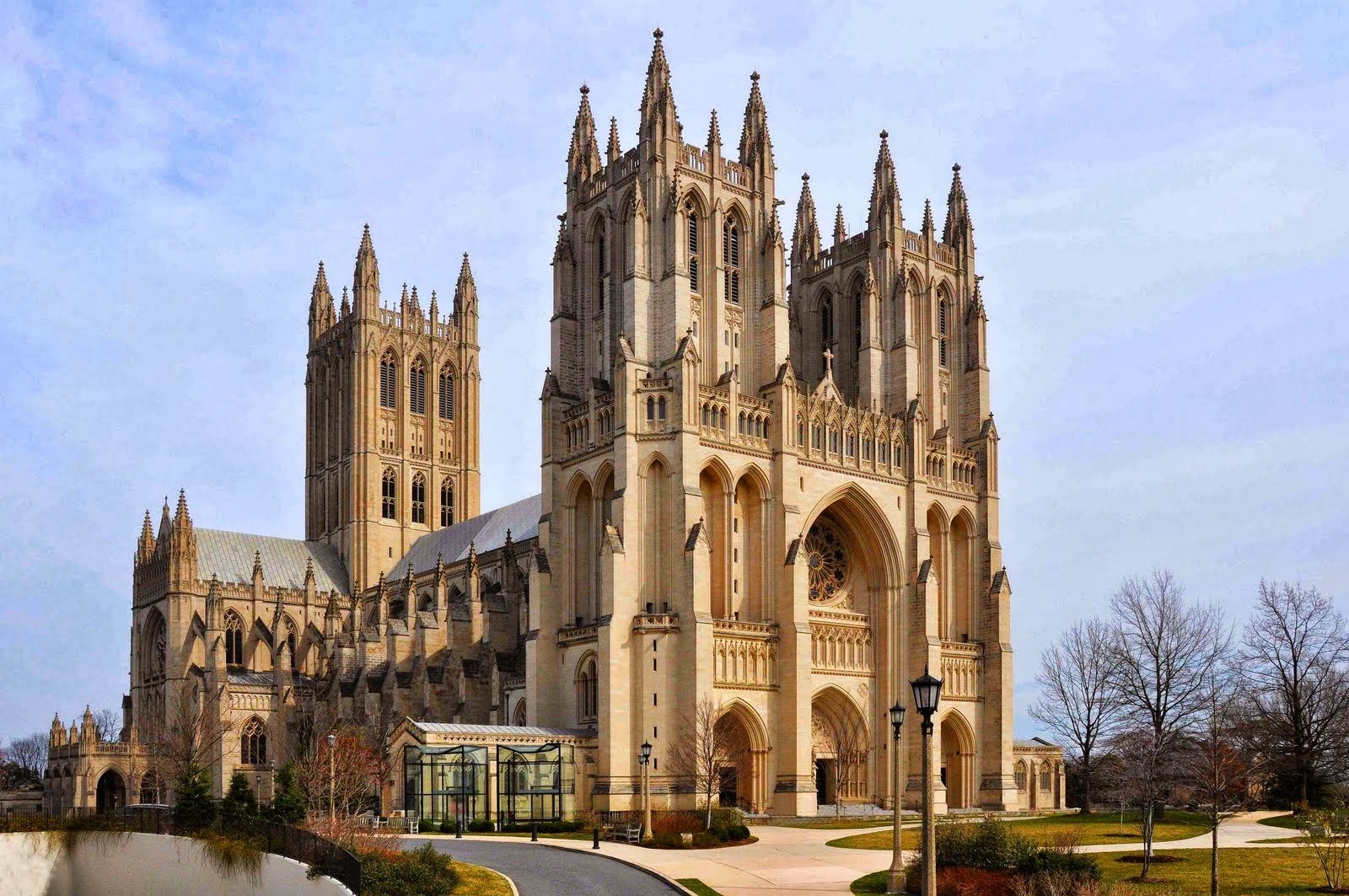 Though it may seem obsolete, some cathedrals and church buildings do showcase the Neo-gothic style of architecture. Our modern structural systems have made the need of gothic support systems outdated but the ornamentation and the spires and arches have always created a mysterious vibe and made the structure breathtakingly beautiful. It is acknowledged for the phantasmagorical plays of light and raising the bar for cathedral construction everywhere – even by contemporary standards. Here are some characteristics your standard Gothic cathedral will showcase.

These are architectural elements that often lend a sense of loftiness. The cathedrals often have profuse spiring. Openwork spires are the most common of all, they consist of stone tracery held together by metal clamps. They have the ability to scale heights while lending a feeling of lightness in the structural skeleton. 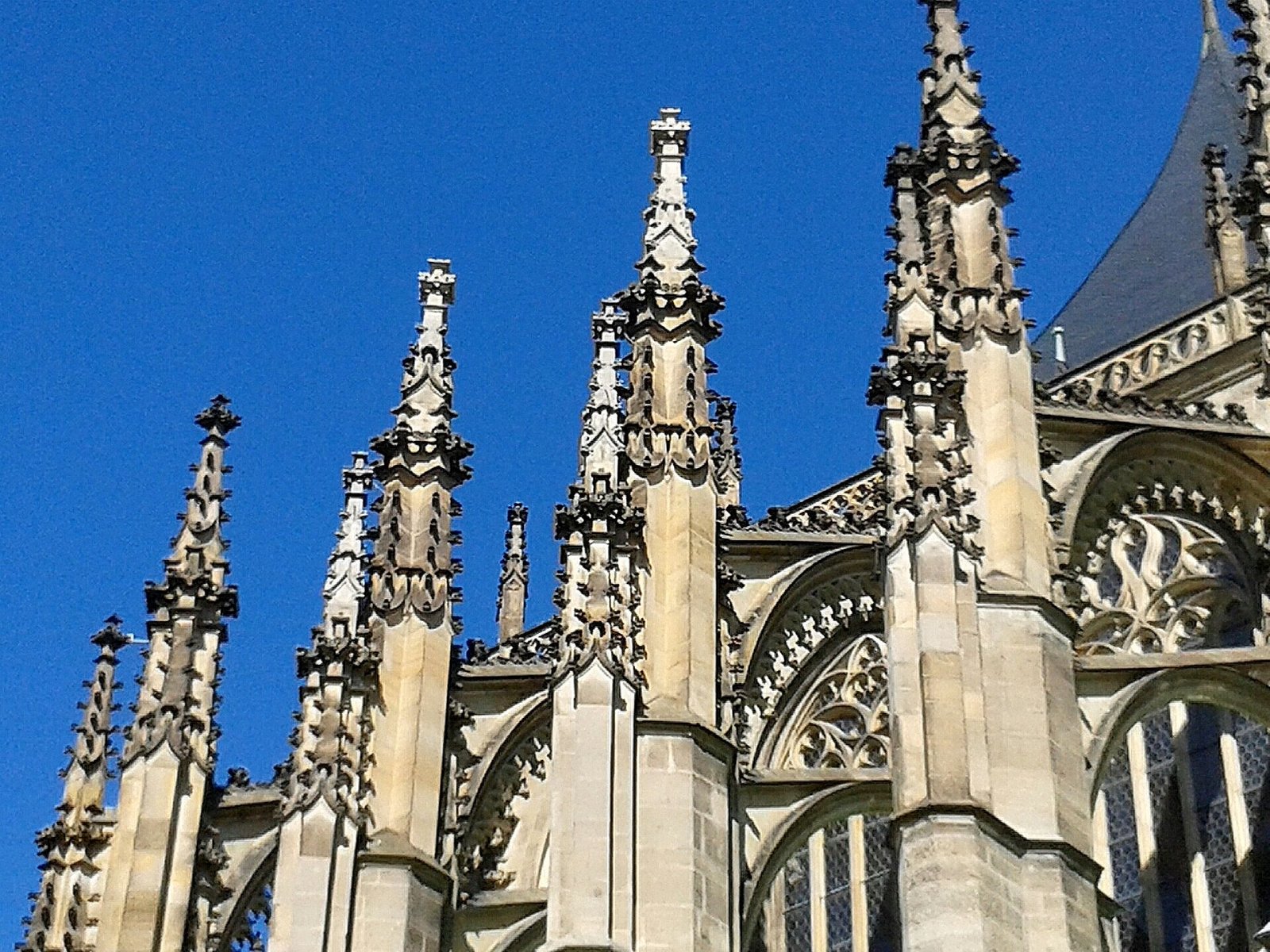 They were originally used for aesthetic purposes but later they were ingeniously used to transfer the dead load from the vaulted walls to the ground. They look like spider legs erupting from the main structure. To add a degree of stiffness to the structure, they were stepped back from the main wall and connected to the roof via arching supports. This helped in thinning the walls to a great extent or even being replaced completely by glass windows. It helped the style of architecture become lighter, taller and have a greater aesthetic approach and feel than before. 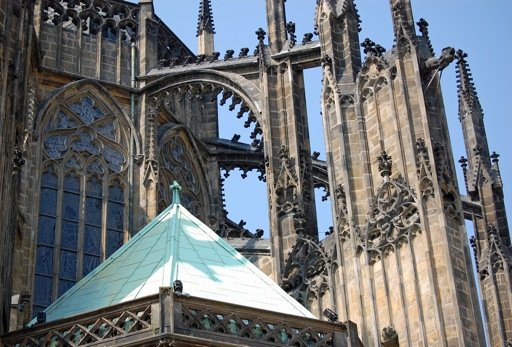 The gargoyle (derived from the French word gargouille, meaning gargle) is a sculptural waterspout, placed to prevent rainwater from running down masonry walls. These numerous grimacing sculptures divided the flow among them, minimizing potential water damage. St. Romanus is often associated with the gargoyle; legend speaks of him saving Rouen from a snarling dragon that struck terror even in the heart of spirits. Known as La Gargouille, the beast was vanquished and its head mounted on a newly built church, as an example and warning. 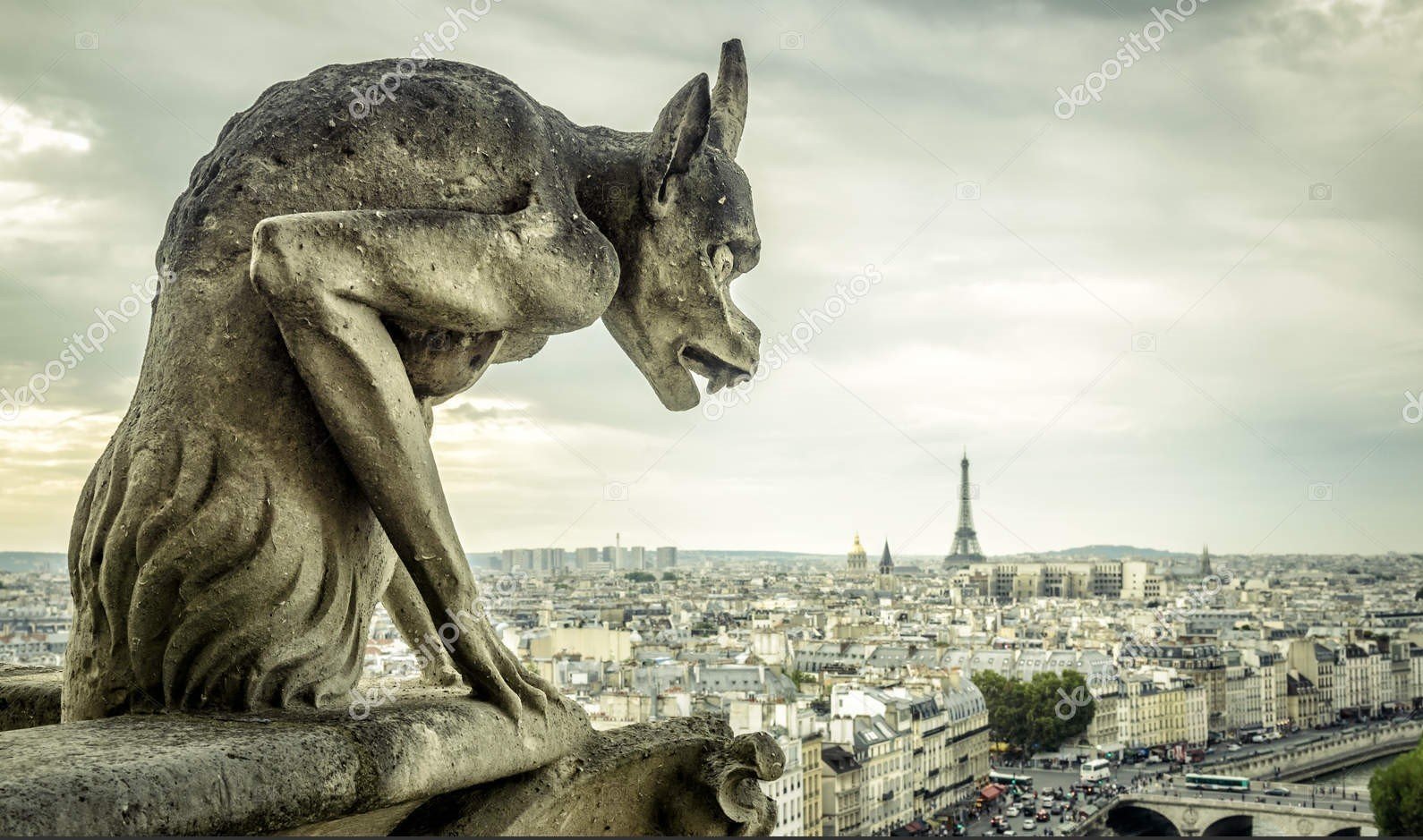 It was used to direct the weight downwards along its ribs. These helped restrict and selectively transfer loads onto columns and other load-bearing structures, eventually freeing the walls. Hence, large glass stained windows and tracery could be used. 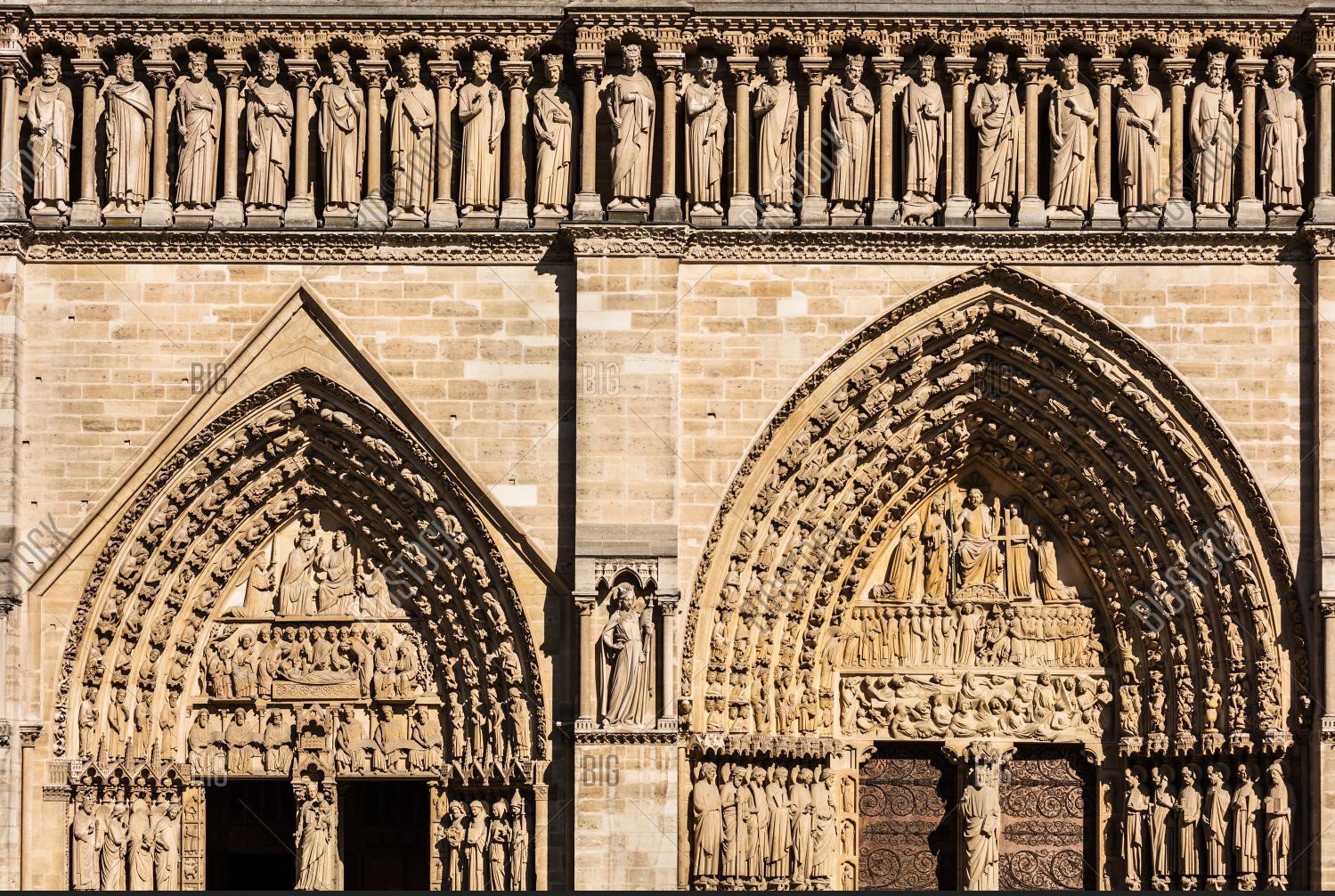 This refers to thin stone frames that are inlaid in the windows to support the glass set in. Bar tracery found expression in the Gothic period, with its lancet-and-oculus pattern that aimed at conveying slenderness of design and increasing the amount of glass panelling. 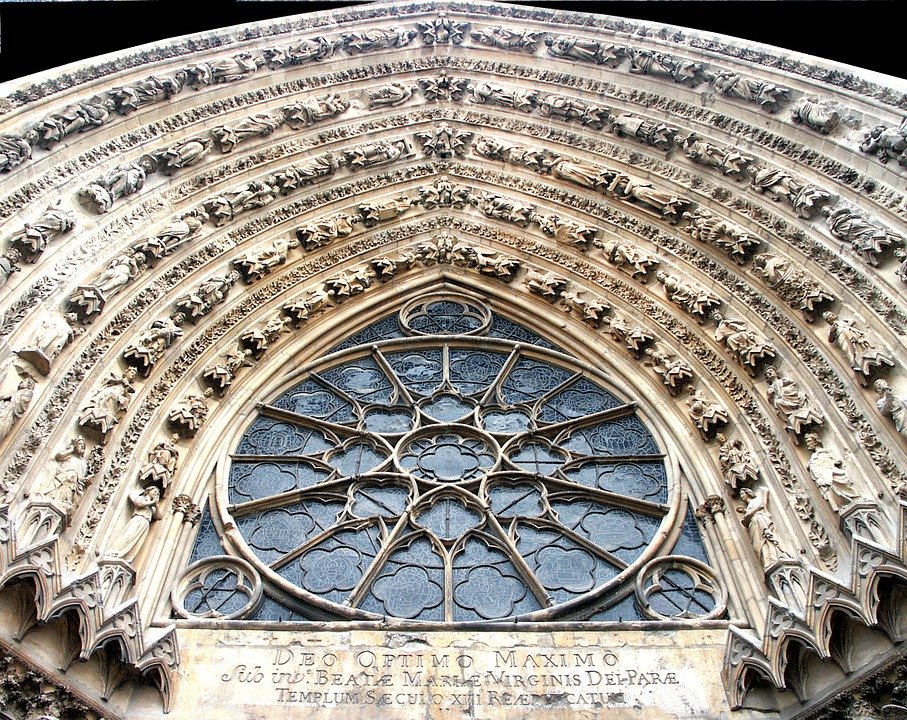 There were two very specific window designs established during the Gothic period – the narrowly pointed lancet reinforced height and the circular oculus held stained-glass. An immense oculus on the walls of churches formed a rose window, the largest of which is found at St. Denis. Divided by stone mullions and bars, it held radiating stone spokes like a wheel and was generally placed below a pointed arch. 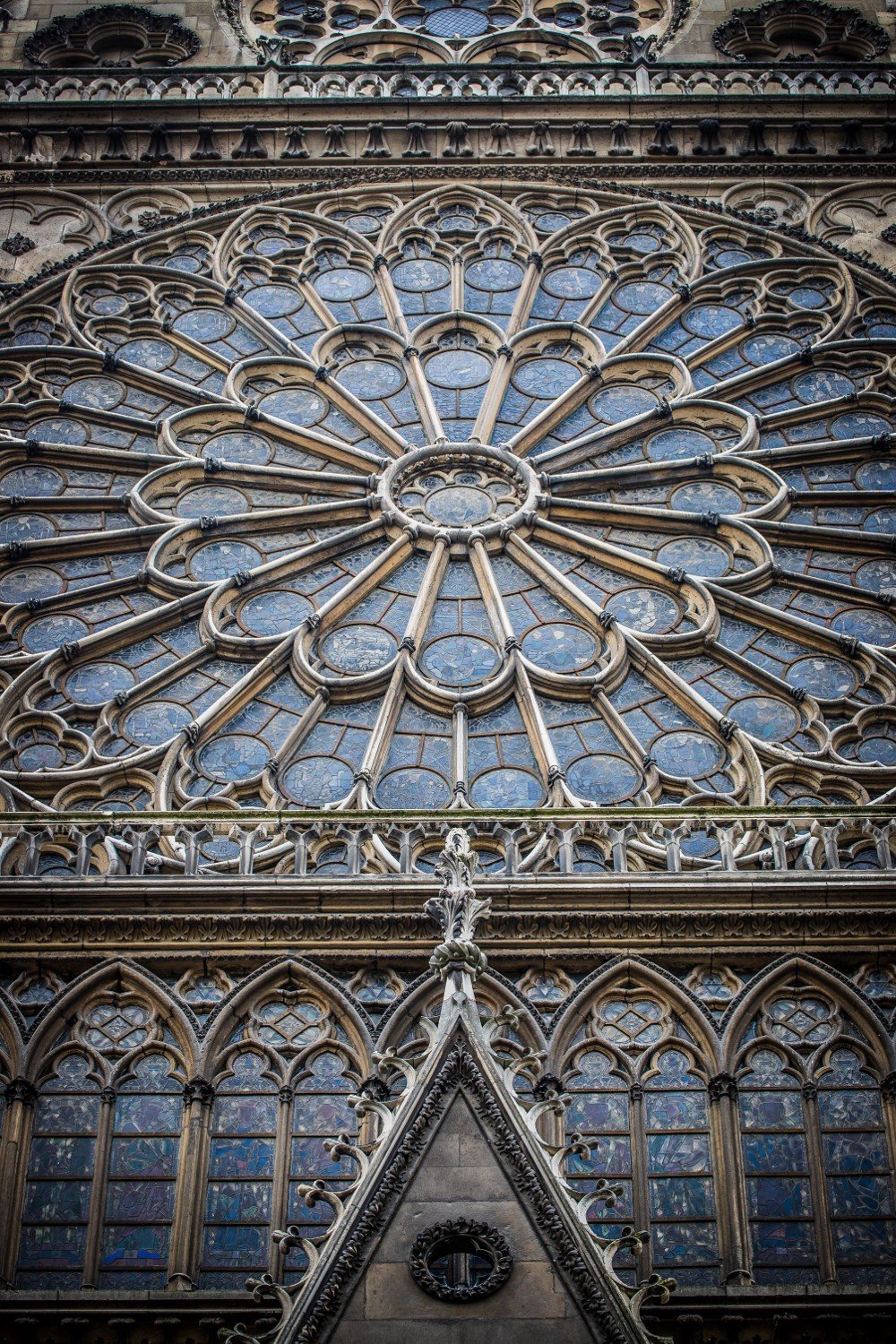 The Romanesque groin vaults were replaced by ribbed vaults to counter the complexities faced in constructions and its limitations to only span square rooms. Also known as ogival vault, it was developed to transfer loads better. 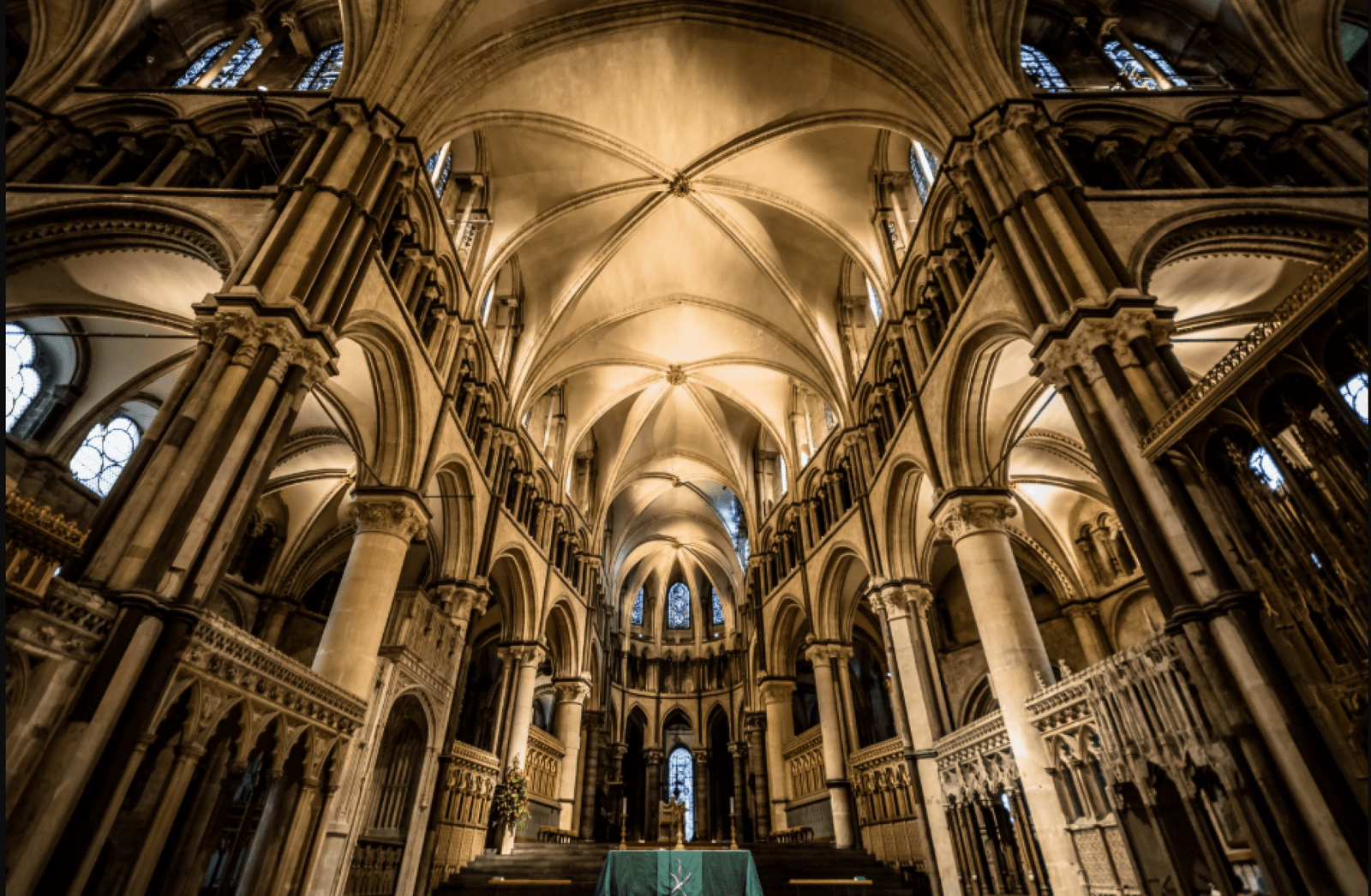 Fan vaults was generally used in English cathedrals and was a distinctive difference between the French and English cathedrals. The ribs of the fan vault are curved equally and equidistantly spaced, giving it the appearance of an open fan. 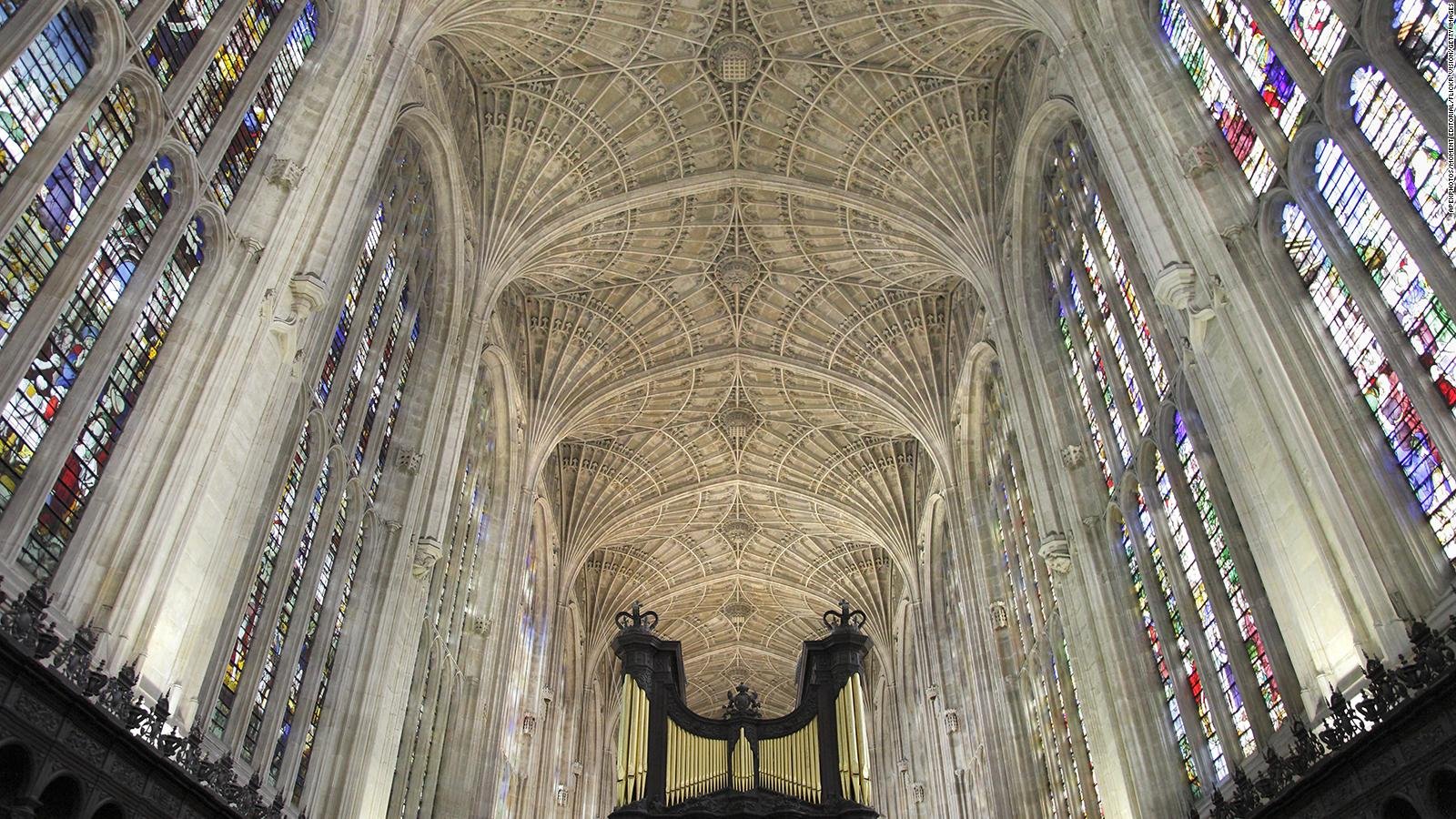 The Gothic era showcased some of the most detailed sculptures. Very commonly found were sculptures delved into the same stone as the column supporting the roof. These could be sculptures of patriarchs, prophets and kings. 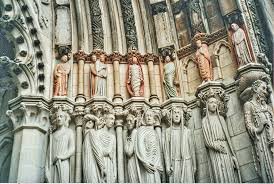 An ancient style of architecture that stayed over 7 decades and still has its influences in our structure. It might give chilly castle vibes but it also is one of the most decorative and ornate styles. We can surely modify and incorporate it in many structures even today, at least some of the characteristics. It truly is like wine, ages better with time.

Srishti is an aspiring Architecture student, interested in Architectural journalism. She has a keen interest in writing and poetry, and has been maintaining a blog for the past 5 years. She hopes to make the layman inquisitive about architecture and beyond, by merging her profession of architecture and her passion for writing.