Ecological systems have been surviving on earth for a long time and will continue to exist in the far...
450

Taliesin built on the beautiful desert land of Spring Green, Wisconsin is an architecture school founded by a well-renowned architect, Frank Lloyd Wright. 50 to 60 students were allowed to do a Taliesin fellowship under him. Another campus that serves as one of the two campuses for the School of Architecture is located in Scottsdale, Arizona. It was used to escape the extreme winters of the American Midwest.

The very first building Taliesin East was built in 1911 at Spring Green. During August 1914, an employee murdered Wright’s family and colleagues who used to work in the studio. Most of the residence was completely burned but neighbors were able to save the most portion of the studio. After a few months of Wright’s recovery, he started rebuilding Taliesin which was completed by spring, 1915. The new structure was not really used for residential purposes; Wright treated it as an art museum of his collection of Asian works. On April 20, 1925, the bedroom in the house caught fire which spread immediately because of the high winds due to stormy weather. After the destruction of Taliesin II, Wright was deeply caught in debt and was forced to move to California in 1927. He returned to Taliesin in the winter of 1928 and started to rebuild Taliesin III. Later, Wright purchased another plot of land in Scottsdale, Arizona in 1937. He built Taliesin West as his winter home and school which was used until his death in 1959. 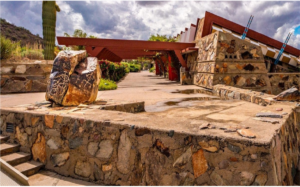 Frank is known for his organic architectural approach, the same can be experienced here as-built structure is seen to be beautifully interlaced with the expansive open planes and dunes of the desert environment. Low-level structures with captive series of terraces, gardens, and pools add to the well-arranged composition of the design.

Timber and stones are incorporated in the design very thoughtfully, blending completely with its surroundings. Walls are constructed using large stones within the concrete and smaller stones are used in landscaping elements. Timber structures are painted red to match the red tones of the stone and the surrounding desert. A rib-like structure over the garden room and Wright’s drafting studio is a translucent canvas roof that provides optimum natural light. These pitched roofs are angled upwards prevent intense sunlight and heat. Other redwood details include coverings for the porch, window frames, and steps leading to the pool.

Wright and his apprentices continued to add changes in the building which includes components like a dining room and a music pavilion. A six-sided cabaret theatre has become one of the architect’s major accomplishments because of its impeccable acoustics. Boulders available naturally, are used at the whole site as an attractive landscaping element and in construction of fireplaces under skylights and clerestories, which became the most beautiful feature of the interior work. 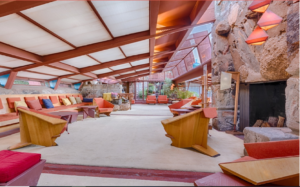 The house includes a pool made of rock and concrete that contains a fountain shaped like a fire breathing dragon. During the construction, the column of the dragon was fitted with a gas pipe so that it would spout fire instead of water.

Will The School Survive?

The school has been planned to shut down in June because of the financial reasons with Frank Lloyd Wright Foundation. A statement was already released in January 2020 by the school that the board is forced to make the gut-wrenching decision to close both of its campuses in Scottsdale and Spring Green.

But the very recent news suggests that the board members have decided to reverse its decision after the school has been able to secure the additional funding. However, it does not mean that the foundation, who owns the buildings and the school, has to approve the decision. People all over the world are opposing their decision of closing the school. They describe it as a tragedy and want to do anything in their power to preserve Taliesin.

Despite the major changes over the years, the complex has a sense of aesthetic landscapes; composing well with the mountains being the part of the surroundings – the original intent of the famed architect.