In India, there has been a dedicated mission initiated by the government which aims at converting the cities across...
1253

Frank Lloyd Wright was an American born architect, interior designer, writer and educator who has designed more that 1000 structures and had completed over 500 of them, his design approaches primarily included the harmony between man and nature. This philosophy that he initiated was known as organic architecture, which was best implemented in one of his structures ‘The Falling Waters’, and also stands to be his one of the best works even till date.

As the initiator and founder of this new design thought he was part of an architectural revolution in the twentieth century thereby setting an example for generations to come through his works and believes. In 2019 a selection of his work became a listed World Heritage Site as The 20th-Century Architecture of Frank Lloyd Wright, he was also considered as the founder of what is now called a Prairie School of movement in architecture. Wright has written 20 books and many articles and was popular for his original designs of interior elements inclusive of furniture and stained glasses. 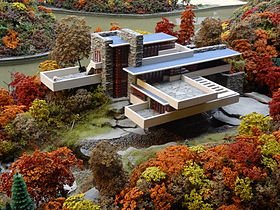 Falling Water is a house designed by Wright in 1935 in the southwestern part of Pennsylvania, 43 miles (69 km) southeast of Pittsburgh. The house was originally built as the weekend home for the Kaufmanns’, build partly over a natural waterfall located in the Laurel Highlands of the Allegheny Mountains is a retreat. Although designing this house came very late as an opportunity in his life, and perhaps helped him to further reconfigure his position in the world of architecture.

The design also follows a very important principle of ‘Form Follows Function’ as well, the initial plan of the house was designed keeping mind how each of the spaces would link each other in the most ambitious yet appropriate way. Much to the owners surprise the house was designed above the falls, while they were expecting it to b below that offering a view from cascades and was initially upset with this change.

The brief of the house stated that they wanted a space to entertain large number of guests along with a bedroom for their son and an additional guest room, hence to cater to all the needs a cantilevered structure was proposed. The structural design for Fallingwater was undertaken by Wright in association with staff engineers Mendel Glickman and William Wesley Peters, who had been responsible for the columns in Wright’s revolutionary design for the Johnson Wax Headquarters. The construction and idea of the project had a lot of clashed between the designer and the owner but was ultimately established. 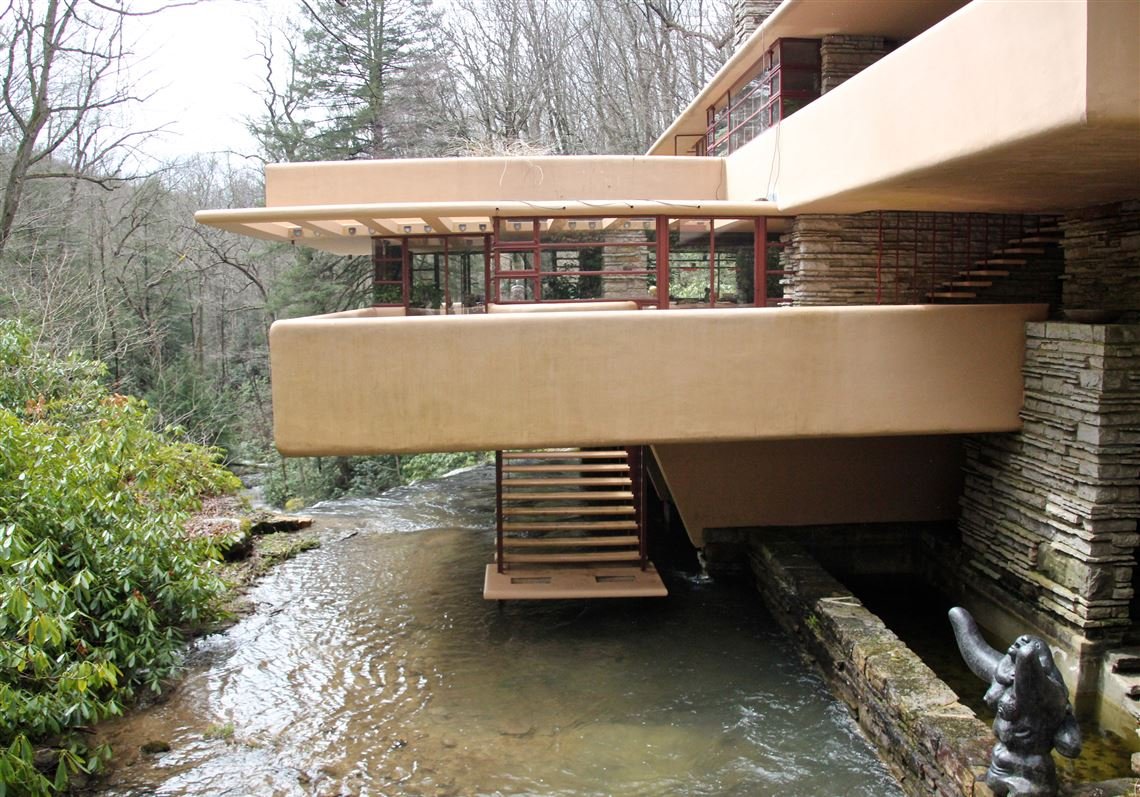 The way Wright had designed the various interior and exterior spaces which also aimed at creating an harmony between man and nature certainly reflected his love for the Japanese Zen minimalistic concepts in architecture. The fireplace of the house was made by integrating the natural boulders at the site, while the main rock on which the house was build ledges upto a foot through the living room to feel the link. Also great details have being given to small things in order to maintain the flow for example, where glass meets stone walls no metal frame is used; rather, the glass and its horizontal dividers were run into a caulked recess in the stonework so that the stone walls appear uninterrupted by glazing.

From the cantilevered living room, a stairway leads directly down to the stream below, and in a connecting space which connects the main house with the guest and servant level, a natural spring drips water inside, which is then channeled back out. Bedrooms are small, some with low ceilings to encourage people outward toward the open social areas, decks, and outdoors. Even the colour palette was kept simple in order to maintain the harmony the scheme was chosen to be light ochre for the concrete and Cherokee red for the steel. 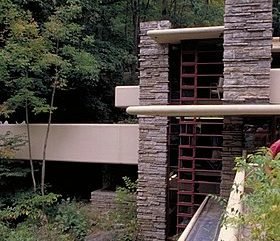 The structure has been exposed to light, humidity and other such extreme conditions of weather as a result of which it was a lot of harm had been done, finally in 2002 after complete repairing of the house the living room floors were removed, the walls were also repaired without compromising on the exterior or interior along with a lot other modifications. The house attracts almost 160,000 visitors from around the world each year who come over with the expectation of viewing a structure which has inspired generations after generations.