Chinese hackers attempted attack on Indian Cyberspace more than 40,300 times in a week post- Galwan clash An Overview: After a...
564

Ever since man first started building structures, water has been an innovative part whether its for indoor pools, exterior fountains, waterfalls of grand entrance piece. Architecture, through its process till now, has incorporated water in every way possible, engaging it with innovative techniques. Sometimes serving as an aesthetic purpose or sometimes promoting sustainability.

Water is a unique and limited resource, and how we incorporate it with the design now matters. Water features are set to take various different forms and serve different purposes. Today, the direction of incorporating has changed from aesthetic to new innovative uses that embrace the natural elements in the buildings itself.

Architecture and water have a brief history of the intersection, ranging from aqueducts engineered by the Romans to Frank Lloyd Wright’s Fallingwater. The relationship between both holds a new value in today’s modern age when climate change has become the driving factor. The innovative techniques of incorporating water are evolving with the close relationship between ecology and humans. 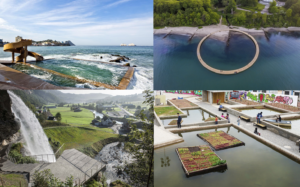 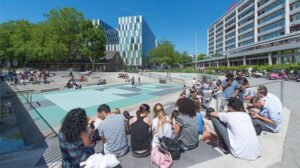 Some structures of buildings, rather than incorporating water intentionally, embrace the existing landscapes, and build on it, around it, through it.

By studying projects like this, we realize how some cities and countries are trying to incorporate water with architecture and urban planning– by collecting water, reusing, recycling, harvesting, etc. The use of water in urban architecture and design today is blending with the environment. Similar to green space and trees, water offers a peaceful respite in various forms.

Whatever the scale of project or design, it thoroughly reflects an evolving concept of the relationship between humans and ecology. For the ones who get inspired by nature for designing a structure, technology does its part from- advances like digital technology, computational design, fabrication tools, 3D printing, and Artificial intelligence.

The next generation of Acquatectue is here! It will strive to do more than implementing water in design, and more with water.