The Legacy Of The Chandela Dynasty: Khajuraho Temples

The Khajuraho is not one temple but is actually a whole group of Hindu and Jain temples in Madhya Pradesh, India. Dedicated to the religions of Hinduism and Jainism, the temples were a clear expression of acceptance and respect for the two differing religious views among the people of the Chhatarpur district.

Was It All Built By One Person? 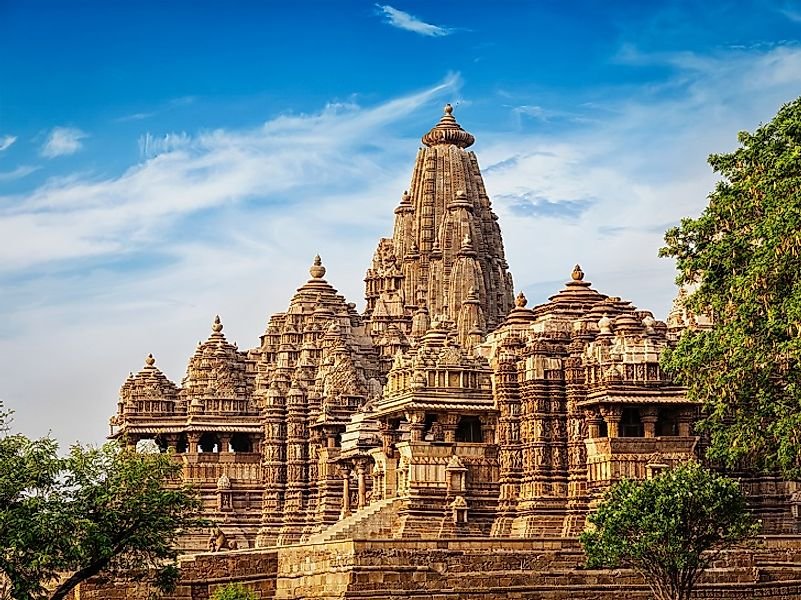 The Khajuraho group of monuments were built during the reign of the Chandela dynasty. Most temples were built by the Hindu kings Yashovarman and Dhanga during 950 – 1050 AD. The currently existing and the largest of all the Khajuraho temples is the Khandariya Mahadeva temple built by King Vidyadhara.

The Impact Of History

The name Khajuraho in Sanskrit means “the bearer of the date palm”, a name which probably rose from the two golden palm trees that originally flanked the entrance. Under the reign of the Hindu kings until the 12th century, when possibly the last of the temples, the Duladeo temple, was built, the Khajuraho group of structures consisted of 85 temples for Hindus and Jains, of which 25 remain standing today.

When Mahmud of Ghazni attacked the region, the Hindu king agreed to pay him a ransom to end the attack and retreat, forming a peace treaty. During the 13th century, the army of the Delhi Sultanate seized Central India. The Chandela Kingdom was now under the Sultan Qutb-ud-din Aibak.

In 1495, Sikandar Lodi had a campaign to destroy the temples of India and it included the vast group of temples built by the Chandela dynasty. Under the Muslim rule, many temples of Khajuraho were razed to the ground and desecrated after which the remaining temples suffered a lengthy period of neglect.

The remaining temples were protected because of the dense cover of forests surrounding the area. Although Alexander Cunnigham reported soon after their rediscovery that the temples were secretly in use by yogis and pilgrims who visited on the occasion of Shivaratri.

Being a group of 85 in number, the Khajuraho temples were divided into the western, eastern, and southern geographical divisions. All the temples were built entirely of stone but used no mortar. The builders of the age displayed their skill by the use of mortise and tenon joints making the temples stand strong till today. This incredibly precise method of construction uses joints that provide structural stability to the temples with the help of gravity. 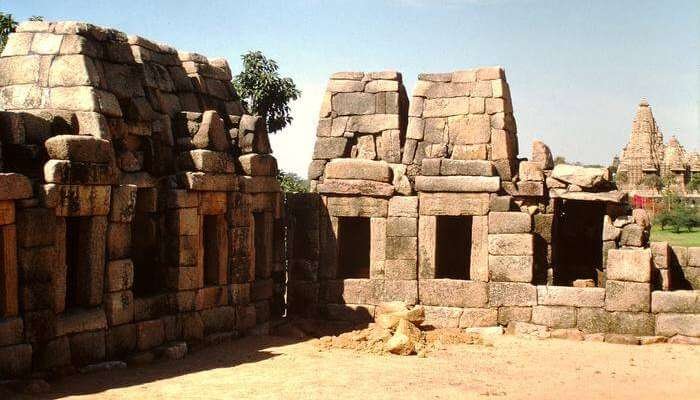 The Khajuraho temples were built of local sandstone with granite foundations that are concealed by the earth. Although, one of the oldest temples of the group, the Chaunsat Yogini temple, was built of coarse granite blocks and now lies in ruin.

The use of superior quality sandstone and skilled labor enabled the carvings to even have their hair, intricate jewelry, and manicured nails detailed out.

The Design Of The Khajuraho Temples 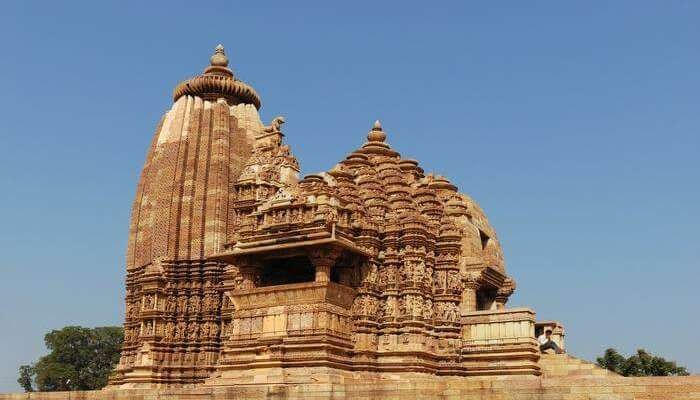 The Khajuraho temples follow the Vastu-Purusha-mandala which dictates the designing of any dwelling. The temples are symmetrical along the linear axis, concentrically layered, and repeat around the garbhagriha. The shikhara rises high above the garbhagriha with layered, concentric squares that are each turned a few degrees to imbibe variation in the design. The tall shikhara is said to reach Mount Kailash, the abode of the gods.

The architecture of the Khajuraho temples is a crystal clear reflection of the Hindu beliefs through each form, space, and arrangement. The images in the form of sculptures on the walls and the plinth of the structure express notions and stories with their placements. Even the ceilings of the temples are ornately carved as is seen commonly in Jain temples.

Even the inscriptions on the walls are poems in the ancient language of Sanskrit.

All the temples except one of the Khajuraho group of temples face east, the direction of sunrise where the entrance is also placed.

The largest of them all, the Kandariya Mahadeva Temple

Known as the “largest and grandest temple of Khajuraho”, the Kandariya Mahadeva temple is 31 meters in length with the main shikhara towering up 31 meters too. 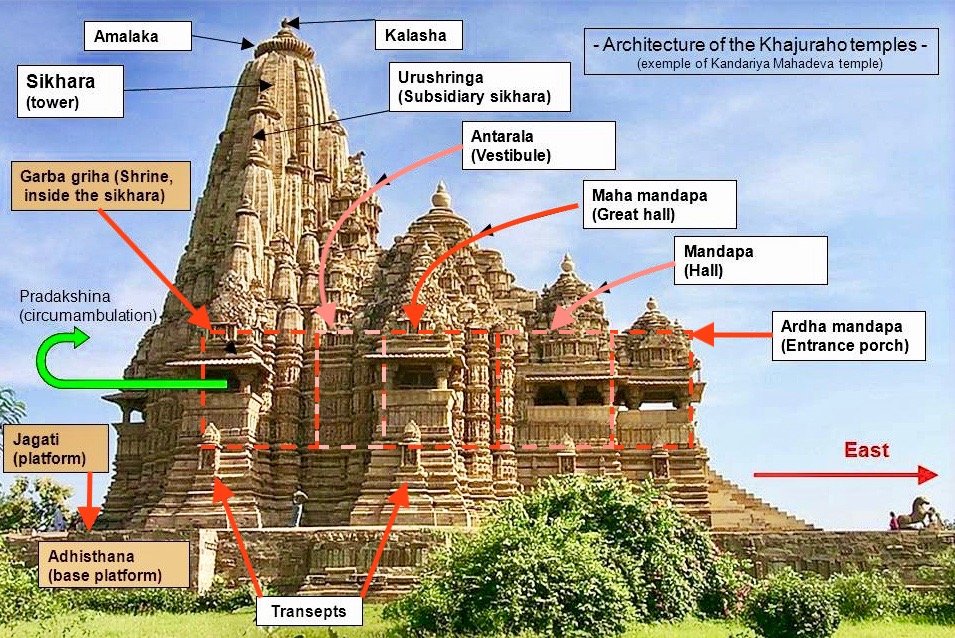 Covered in high-relief sculptures, it is an evident display of the quality of stone and more so, the skill of the craftsmen who carved them. The undulations and the sculptures imbibe depth to the temple, layered over its own three-dimensional quality.

Being made entirely of stone and the use of columns, the interior spaces receive very little light that results in a cave-like atmosphere created within the temple. Though dimly lit, even the interior is densely carved with sculptures of mythical beings, Gods, Goddesses, and musicians.

The most obvious quality is that the form of the Kandariya Mahadeva temple reflects the hierarchy of the spaces within. The towers over the mandapas and the garbhagriha grow progressively taller while still following the same semi-rounded, stepped pyramidal form, with the tallest over the garbhagriha. 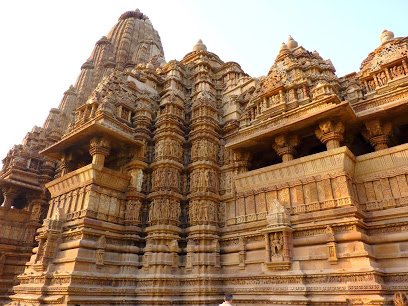 The Khajuraho group of temples is truly an architectural splendor and it is a shame that a large percentage of the temples are lost forever. The ones that remain leave no doubt in the viewers’ minds of their magnificence and the glory of their time.