Despite the pandemic crisis globally, China has started its construction of a $1.7 billion soccer stadium in Guangzhou. The stadium is speculated to the largest arena for soccer globally with a capacity to host 100,000 spectators. Barcelona’s ‘camp nou’ designed by Nikken Sekkei & b720 Fermín Vázquez Arquitectos, has been the largest stadium as of now, this project will surpass this stadium. The aim behind this stadium is to establish China’s soccer infrastructure and make it a capital to host these games.

Evergrande Group, the largest real estate company in China is behind this structure’s funding. The stadium is designed by Hasan A. Syed, design director in Gensler’s Shanghai office. Gensler is an integrated architectural practise that expertise’s in planning and designing. The firm has a global reach with many landmark projects under them such as the Apple stores, Facebook headquarters, Airbnb, etc. Xu Jiayin, the Chairman of the Board of Directors of Evergrande Group is said to be an active member behind the conceptualization of this structure from its planning to modifications.

The form of the structure is that of a lotus flower. As Guangzhou is known as the ‘flower city’, this project takes its inspiration from it. The design is organic and is achieved by parametric design practice. The overlapping petal-shaped elements form the enclosure for the stadium. The inner petals converge to form a circular opening in the center which gives the inner arena a dynamic look and adds up to its eccentricity. The lotus form adds up to showcase China’s traditional culture and thought, through organic forms. 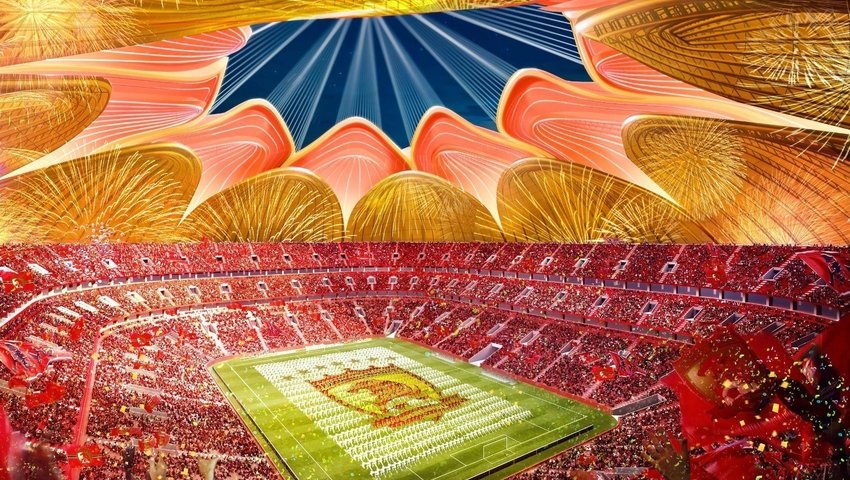 The COVID-19 has issued many precautionary steps regarding social distancing and gatherings. Despite these scenarios, China has been at the forefront in continuing the construction of this much-awaited project. The stadium is supposed to be the most sought after stadium of its time to host a public spectator for almost 100,000 which sets a record in itself. The Ever Grande group has even announced two additional stadiums along with the Flower city stadium which will host 80,000 spectators at one go. These large scale funds and investments are done to establish China as a sport centric country on a global level. The stadium is to host the 2023 Asian Cup.

The Flower City stadium is supposed to be a landmark arena to host soccer events due to its capacity to host a large mass and also, due to its spectacular design.

The stadium is to be opened by the end of the year 2022. The structure is expected to be an architectural landmark that will represent China and will help in increasing tourism and its recognition on a global level.