Tesla’s Cybertruck: A Buzzword Of Our Time

Chinese hackers attempted attack on Indian Cyberspace more than 40,300 times in a week post- Galwan clashAn Overview: After a...
338

Recently, Tesla’s Cybertruck has been in the news as soon as it rolled out. A new electric pickup truck looking ‘futuristic-like’ and ‘cyberpunk’ and indeed with its triangular profile, it looks a bit a shiny, gabled roof on wheels. Get to know about what all fuss is about!

Reports were easy to track from the internet’s reaction about the Cybertruck, which included a lot of love but numerous jokes too.

On November 21, Ellon Musk unveiled the Cybertruck – a pick-up truck that Tesla hopes to sell in the United States. Pick-up trucks generally are large cars with a front area called a cab where people site, and a separate rear area where cargo can be carried. As one can see, the top six vehicles in the US are all pick-up trucks for the past decades. Musk has mentioned about the design being inspired in part by Blade Runner.

Of those who have seen the Cybertruck – 56% didn’t know about it, 44% reacted negatively, another 27% weren’t sure about how to react. Just 29% of Americans in the survey had given absolute thumbs-up. It is true that Cybertruck will shake up automotive design. By adding the unsure and negative responses gives us 71% of Americans not thrilled with the pickup. This is only 44% of 21,143 and 56% had no opinion at all.

Traditional pickup truck tows huge loads because their structure takes the stress from the towed weight. The following mentioned are Cybertruck’s features that will give you a complete idea about its design. 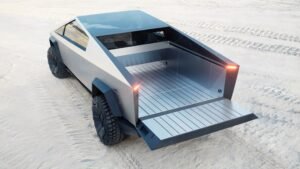 Musk’s design does two things – gets rid of internal framing that traditional pick-up trucks use and the exoskeleton does all the load-bearing, being planar is design (composed of straight lines). With the advantage of using steel as it does not need to be painted, Cybertruck reduces the time-consuming painting process by decreasing the source of pollution.

Cybertruck seems to be a price range competitively from $39,000 to $69,00, whereas the pickup buyers are used to paying nearly $50,000 for a new truck. One of the main selling points according to Musk and Tesla are – it’s incredible strength and resilience of the body and the windows.

When the pick-up truck was first revealed, people hated it as it seemed ugly and unconventional to them which was destined to be unpopular. But after a period of time, people seemed to think that there was beauty in Cybertruck’s angular lines. And within a period of 4 days, a quarter of million people had ordered it, approximately 200,000 orders in 3 days of launch, Musk mentioned. The production is said to begin in late 2021 with the production of the Tri-Motor AWD version of Cybertruck-according to Tesla.

To me, it is astonishing to accept the fact that it is a turning point in the design of automobiles similar to the skyscrapers – a turning point in architectural design. Electric, easy to make, time-consuming process, durable, cheap and a better option than over pollution, time-consuming manufacturing with expensive make is a better idea. After all, the function is an important factor in today’s world than the form.

After so many years of history and development involved in the form and function of an automobile, it is under pressure to change. And the immediate need is to move away from the combustion engine and its apocalyptic environmental effects. Rather its a question to be put forward – Is your manufactured model sustainable?