A Building designed by Algorithms – Museum of the Future

Architecture has evolved progressively over the decades. As the years have passed, it is more based on a mechanized framework than ever. Machinery, Softwares, and digitalized elements have taken over the construction industry. Designers have now started innovating with more challenging forms. The advances in technologies like BIM (Building Information Modelling) has helped the construction processes to work in parametric. The world is now moving towards a new era of building construction techniques.

The city of Dubai is on the frontier of this discipline. The architecture in this city is an amalgamation of innovative design solutions along with a technologically mechanized system. Many architectural landmarks like the Burj Al Arab, Burj Khalifa, Cayan Towers, etc. have been a testimonial of the progress towards the cities of tomorrow. These buildings are innovative and challenge many disciplines in building construction. 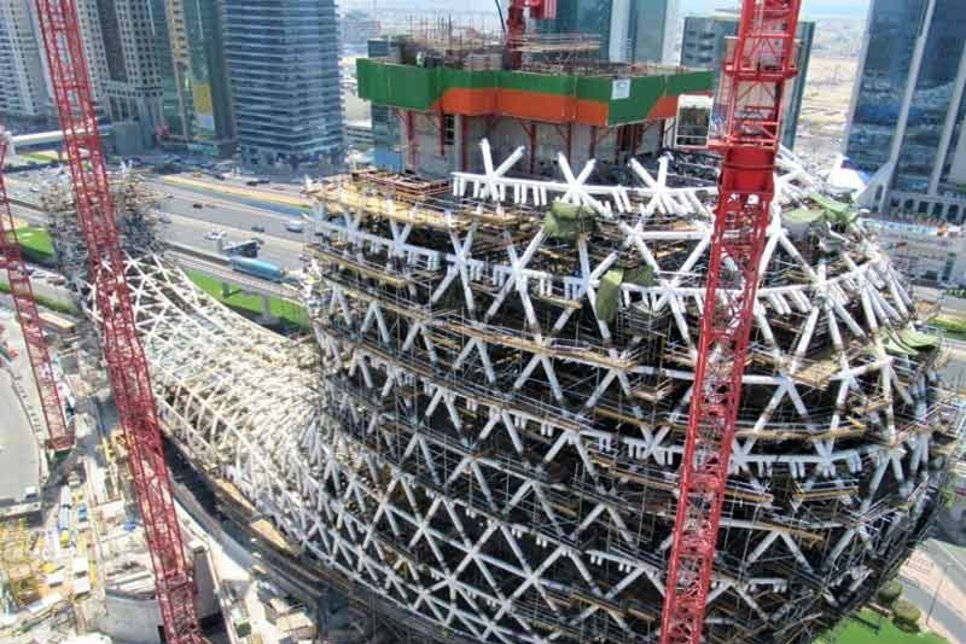 One such example is the upcoming Museum of the Future. Generally, the thought of a museum takes us back to a  generic model of an enclosed space with stationary elements hung on walls and around the entire space. This museum has a unique take on the idea of spaces of this kind. The museum intends to have spaces based on augmented reality and virtual reality, they will be an advancement in this field. therefore, a structure of this kind was designed with a futuristic approach.

This building is located in the financial district of the city. The structure is torus-shaped with an elliptical opening from the center. Killa Design, a local firm won the competition for this museum. The void in the torus-shaped structure is derived as a symbol to denote the curiosity of the world which we don’t know as yet, figuratively as a concept behind it being a museum. The entire facade has Arabic Calligraphy which is rumored to be poetries written by the now Vice President and Prime Minister of the United Arab Emirates, Mohammed Bin Rashid Al Maktoumi. This calligraphy also acts as the openings for the entire museum.  The entire structure has 2400 diagonally intersecting steel members.

Parametric design and BIM has been the key reason behind the structural framework being precise. Parametric design is based on algorithm thinking of specific variables that are manipulated to generate an outcome. Whereas, BIM is used to calculate the quantities and helps in the documentation of a structure. These two are the pre-requisites that help in determining the end product in a precise manner. The design process of the Museum has involved the use of these techniques extensively.

The diagrid framework is used to form a lightweight facade which was then installed with the calligraphy panels. The sequencing analysis for the structure has been a crucial step to determine the entire building timeline. It took 14 months to assemble the steelwork itself. There are 1024 panels used in the facade, of which no two fiberglass panels are alike. Each panel is made with a unique size and inscription. This structure has also started its conceptualization from a 3D process over the generic 2D to 3D shift. Through this process and with the help of parametric and BIM, the visualization of the end product was done in the start itself, which helped in maintaining the precision.

“We applied the lessons from previous projects and using new technologies, we developed tools to solve problems that we know exist so we didn’t have to face them again.”, says Tobias Bauly, BuroHappold’s project director for the Museum of the Future. 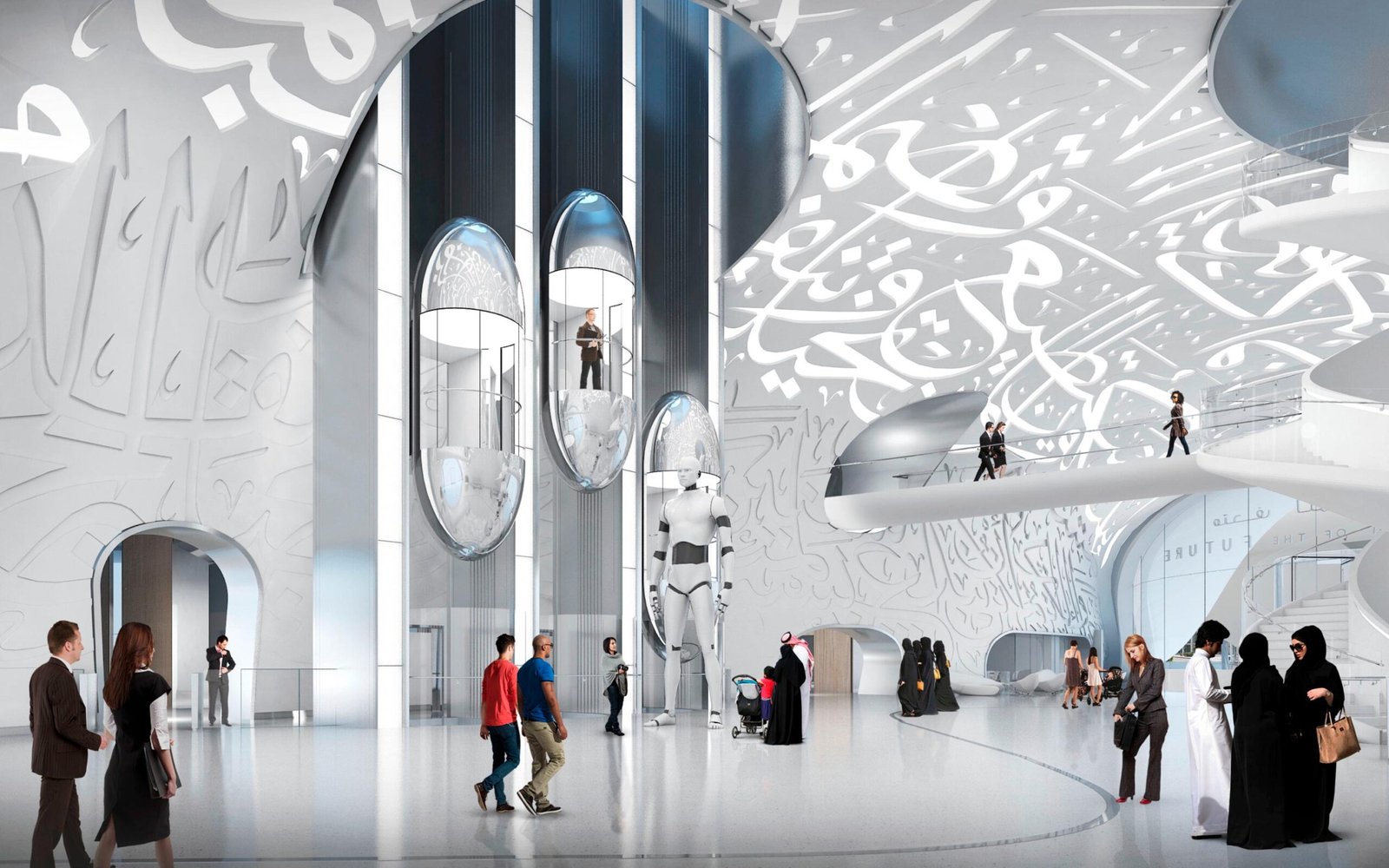 The structure is also a LEED platinum certified building with greywater recycling, climate control, regenerative drive lifts, and climate control. The program also dedicates an entire floor to showcase climate change as a concept through augmented reality. The form has also shaped the interior spaces uniquely and it has been a pathbreaker as a design product. The form makes the interior more dynamic and introduces a new way of circulation.

It also challenges the possibilities of architecture and thus, opens up new doors for innovation in design thinking. 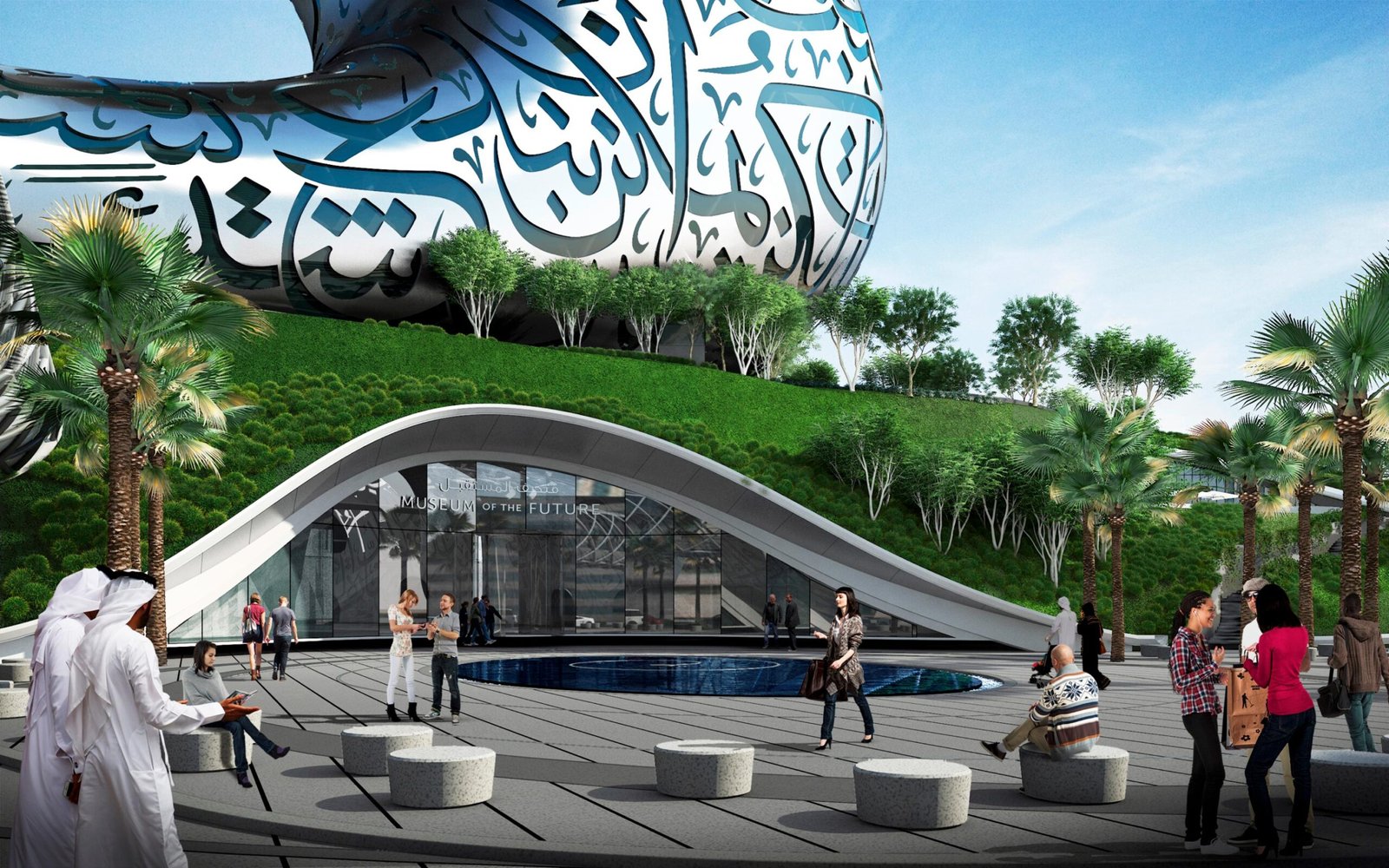 “This is not the museum where you will see objects in cases with labels next to them,” says Lath Carlson, executive director of the Museum of the Future.

“In a lot of the main galleries, there will be no labels at all. It will be a completely immersive experience that engages the visitor as a really important contributor to the experience, rather than as a viewer of someone else’s work.”, says Lath Carlson, executive director of the Museum of the Future.