Shift Architecture Urbanism designs local market and other local business an opportunity to open amidst the pandemic situation considering all forms of social distancing among humans for safety issues. The world is altogether going through a never before the case with nationwide lockdowns and economic stagnation, which is eventually going to be followed by a global recession. Since the outbreak of the pandemic Novel Corona Virus or the Covid-19 which has already affected nearly three lakhs only in India with more than eight thousand deaths, while the most affected country happens to be the global superpower America.

The World Health Organization advising the complete shutdown of the borders as a preventative measure to avoid and lessen the spread of the infection, the world economy is constantly dipping having the most effect on the small scale industries especially that of the third world countries. Now, as finally the unlock phase has been initiated by various countries there lies a serious threat on the spread of the infection hence to maintain the social distancing and to avoid such a catastrophic situation the model was created for local markets. 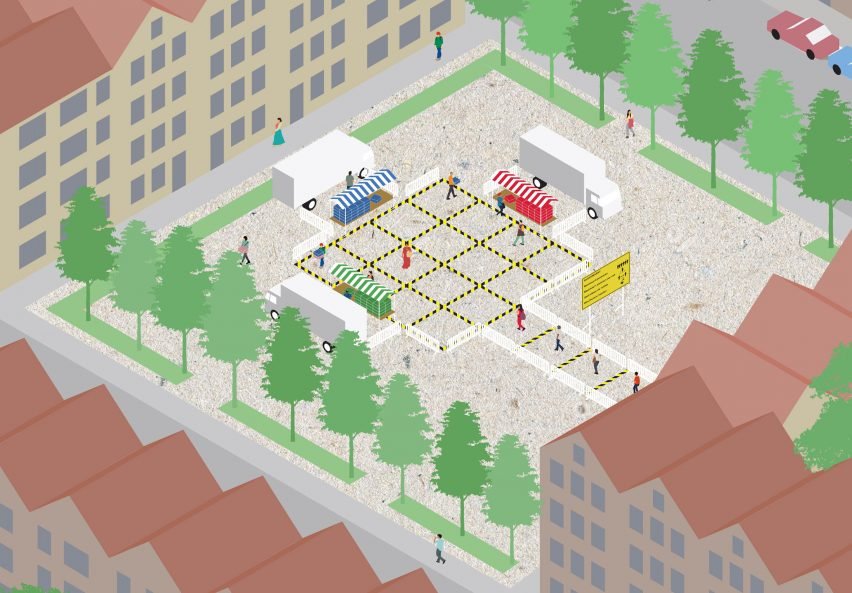 Dutch studio Shift Architecture Urbanism hence came up with this model for a street food market where people can buy fresh produce without coming into contact with any other individual hence sticking to all the social distancing regulations. The concept of the model is derived from Hyperlocal Micro Markets, which is a network of public markets where the customers can buy fruits, vegetables, dairy products, meats, fishes and all other such products without involving any risk of the spread.

The initial proposal contains 16-square grids which can be real in any town or city’s square, catering to other concerns including the problem of the long queues waiting for their products. This plan was based on the city of Rotterdam because the closure of the local markets has resulted in additional pressure on the supermarkets posing for a potential threat due to the overcrowding. Another alarming issue was that not all can afford the supermarkets with many losing their jobs and other financial issues building up. The proposal is based on the fact that existing local market can be split and dispersed throughout the local streets; this is known as, ‘micro-markets that operate on a hyper-local scale’.

The plan mentioned each of the 16-square grid would have three stalls arranged around them, having only one entrance but two exits, also the stalls would be having separate dedicated each for the orders and collections. The maximum number of people entering into the square has been also fixed to six, however, they can move around freely with just one restriction which is only one person can occupy one square at a time.

Another interesting observation was initiating the fact that the stalls sell packages instead of individual items thereby saving the essential time for each customer thereby not letting a long queue to be built. The idea gave consideration to even the little details like the setup and even the shutdown process, as a solution the stall was made mobile and could shift from one area to another. 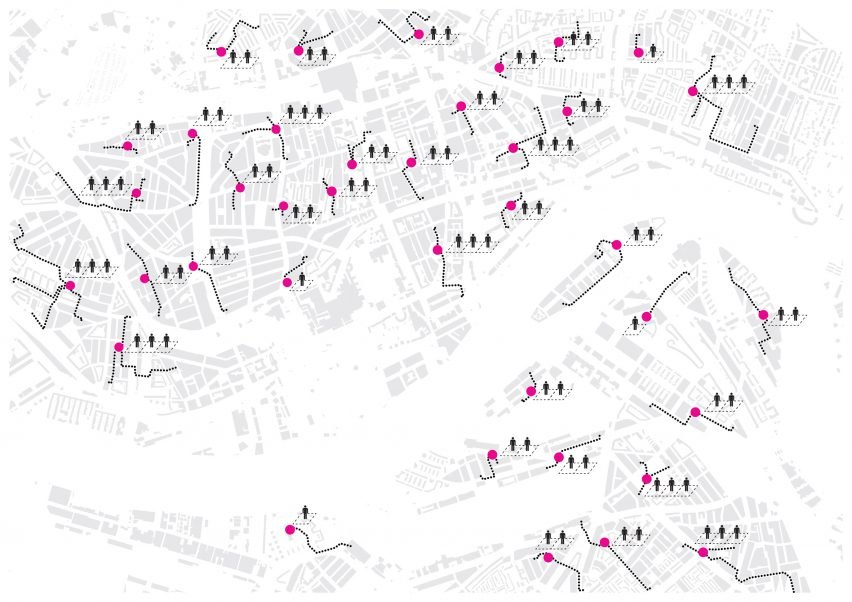 The studio proposed the design approach to “keep the vital function of the fresh produce markets fully intact, even strengthening it, while at the same time minimizing its potential role in spreading the virus”. Also if these conditions can be expressed in countries with low economic progression, the results can be great as this would give a standard boost to all the local cottage industries that would have a chance at redeeming themselves. However, in order for this system to work the local administration would be required to gear up with constant supervision, another concern might be the availability of all essential products at the same time.

Therefore the supplies are also required to be taken care of throughout. All of this is planned to combat with the deadly virus which has been taking onto lives like never before, social distancing being one of the only few measures which have proven results and are important for the reduction. The world however still awaits a permanent solution for this or a breakthrough to meet the needs of citizens.