The ‘Shifting Nests’ is a project proposed by the BLA Design Group to provide a sustainable housing solution for...
623

Thick Walls and Flat Roofs in Homes in Rajasthan

Thesis Topics To Explore In Architecture

The Kanchanjunga apartments is another one of “Charles Correa Housing” designs that adapts modernism to a developing economy. An 84-meter tall residential building, the Kanchanjunga apartments is a direct response to the existing culture, surging urbanization, and the climatology of the region. The signature of Charles Correa is evident in the incorporation of terraces, views, and the unerring sensitivity to the local climate.

Standing tall on a small plot in the crowded south Mumbai, the design of this apartment also serves to address the depleting land resources and escalating land prices by providing the solution of vertical urbanization instead of horizontal expansion.

The design is an experimentation on the form of a box. The context of the site is filled with residences that are simply arrays of matchboxes flanking the street. 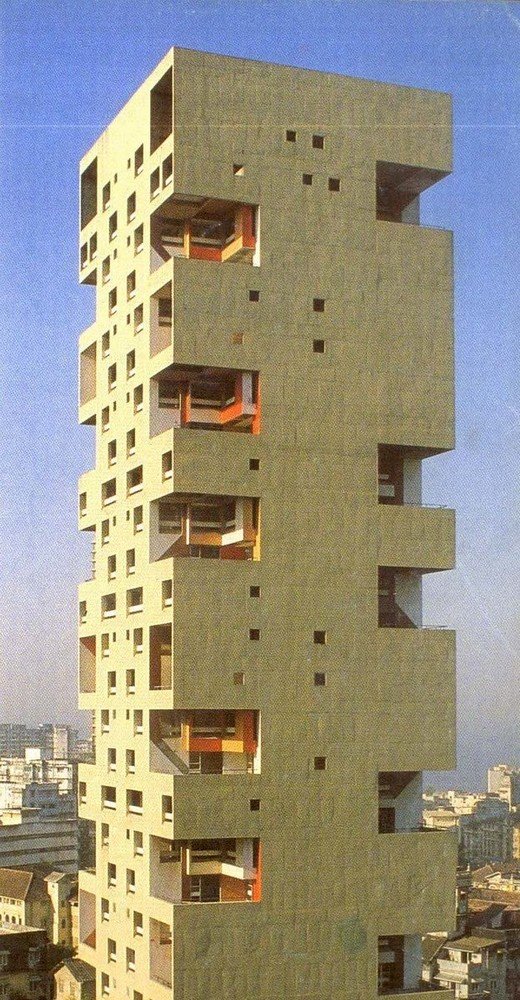 A 21 meter by 21 meter square in plan, the Kanchanjunga apartment uses that same matchbox form at a much larger scale and with alterations that set it apart while still fitting into the urban fabric.

Transformation of the box by complex stacking and differing plans on each floor induces an individuality in the residents; an uncommon aspect in an apartment.

This 32-stories high-rise structure follows an R.C.C shear-wall construction with 6.3 meters cantilevered open spaces. The central core of the building contains the lifts and is the main structural element for resisting lateral loads. This service core was also the first element erected by the slip method of construction. This was the first time that the slip method of construction was used in India for a multi-story building.

Charles Correa is an Indian architect who combines Indian traditional culture with the influences of his western education. This influence is visible through the use of white panels that make the Kanchanjunga apartments strongly resemble Le Corbusier’s work in the west.

The Kanchanjunga apartment is an interlocking of four apartment typologies varying from three to six bedrooms each. Each apartment is a duplex and is vertically staggered to reduce the number of entries on a single floor. This design idea not only reduces traffic on any one floor but also eliminates floors having no entries into any apartment.

Rather than introducing an entire level to convert the apartments and duplexes, Charles Correa added half a level to each apartment and then staggering them vertically so the entrances of adjacent apartments are on different levels.

They are luxury apartments designed by adapting the contemporary bungalow concept to an apartment setting. Each apartment has large garden terraces that provide panoramic views of the surrounding city. These garden terraces are the modern interpretation of the verandas of an Indian bungalow. The vertical stagger in the apartments’ placements resulted in double-height verandahs that transformed the buffer from a balcony to a terrace.

The Kanchanjunga apartments are also a prime example of a building that is truly climate-sensitive. The initial dilemma was about the orientation of the residential tower itself as the location of the site and the climate are contradictory to each other. An east-west orientation of the apartment building would bring in the prevailing sea breeze as well as provide dramatic views of the city and the Arabian sea to the west. On the other hand, the same orientation will bring in a lot of the summer sun and the harsh monsoon rains.

As a solution, Charles Correa added the terraces. He decided the locations of the ‘verandah’ of each house based on climatology as “another in­teresting variation on the principle of the bungalow is to turn the verandah or buffer zone into a garden which not only protects the living areas from the sun and rain but ac­tually thrives on them “. 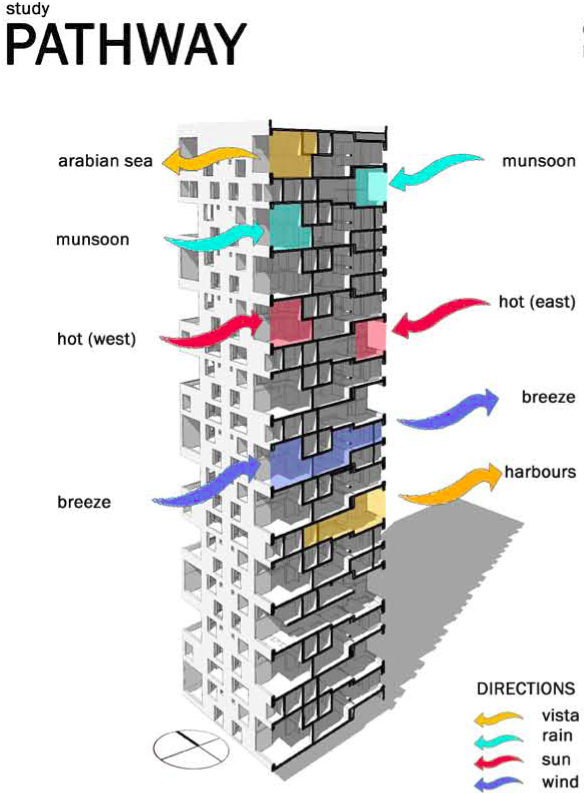 These deep, garden verandahs are suspended in the air and effectively shielded the high-rise units from uncomfortable weather conditions and increase the thermal comfort of the residents. Even the windows are recessed to shade them and cool the interiors.

In response to the Mumbai climate, design considerations were carefully made to combat humidity and ensure cross-ventilation within the residential units. There are more fenestrations on the eastern and the western facades of the Kanchanjunga apartments than the northern and the south one displaying the significance given to capturing the sea breeze.

The careful planning and placement are not limited to the upper floors alone. Owing to the high-rise building, the area on the ground is freed up and micro-organized, providing surface parking, a swimming pool, green areas, and other amenities.

The perusal of this building highlights its sensitivity to climate, user comfort, and its connection to the contextual culture. All of these factors are evidence, not just towards the design of a revolutionary design of a residence but also gives us a glimpse into one of the greatest Indian architects, Charles Correa.