WHAT IS AR GAME?

AR is a short form of AUGMENTED REALITY which means the games which display our Environment and Locality in the background of the game, which makes it more interesting to play. This type of games is played in a portable device containing a camera such as Smartphones and Tablets. AUGMENTED REALITY has the same concept of VR (VIRTUAL REALITY). While playing the game player needs to play the game with his phone’s camera, which helps him to play the game. The player needs to play the game by rotating the phone in the games area and as per the view of the game and can enjoy playing the game.

There are various AR games available to play on various app stores, some of the most popular AR games are as follows:-

POKEMON GO is the game which is made by taking inspiration from the cartoon series POKEMON. In this game, we play the character of a Pokémon instructor and we need to discover many places and various Pokémon’s as per the series. After spotting Pokémon, we need to catch them with the help of Poke balls which helps to store the Pokémon.  In the game, we need to travel to different places to get different things such as fruits, different TYPES of poke balls which keeps the ability to catch powerful Pokémon. We can also attend and participate in Pokémon battles which are held in different places. After the Pokémon gets damaged in battle we can also take the Pokémon in Pokémon hospital to make him powerful again. This game is very amazing to play and played worldwide. 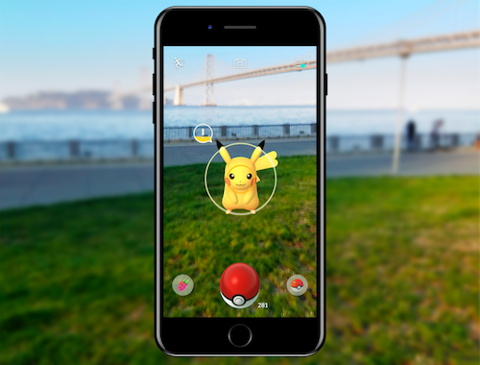 JURASSIC WORLD: ALIVE game follows the movie ‘JURASSIC WORLD FALLEN KINGDOM’. In this game, we need to discover Dinosaurs and capture them to save them from getting extinct. We can also create Hybrid Dinosaurs by changing genetic traits with other species of dinosaurs. This game displays our Environment and Locality as the background of the game. We can find many Dinosaurs in different places near our house or locality.

ZOMBIE GO is a shooting role-playing AUGMENTED REALITY game. In the game, we need to shoot down many zombies which are attacking us. While shooting at them, we can use various arms and ammunition. The game displays our Locality and Environment as the background of this game. While playing this game, we feel like a zombie hunter, who is saving the world from zombies. While doing this, we can use different arms and ammunition after buying them. We can also make powerful weapons to attack more deadly Zombies. TEMPLE TREASURE HUNT GAME is a Treasure hunter type game where we need to find the treasure of God which is Buried in an ancient temple. We need to explore hints and reach the treasure. This game can be played in Single-player and as well as multiplayer mode. In multiplayer mode, we have options like to defend the treasure or hunt for the treasure. In this game, we can also make our own treasure map. To make a map we need to print a QR code page and place it in our locality in a format with lots of hints. This game can be played Indoors and Outdoors as well. In the game, there are lots of Non – playing characters which give us hints to reach towards and there are some devils which try to stop us from reaching towards the treasure.

GHOSTBUSTERS WORLD is the game which is suitable to Film ‘THE GHOSTBUSTERS’. In the game, we need to search for Ghost and attack and kill it. This game is played in Single-player and as well as Multiplayer mode. There are various weapons which help us to attack ghosts. This game includes all the ghosts which are in the movie, including Marshmallow man. This game displays our locality and environment as the background of this game. We can also change the guns with others for attacking more deadly ghosts.