The ‘Shifting Nests’ is a project proposed by the BLA Design Group to provide a sustainable housing solution for...
322

The design of the new Navi Mumbai International Airport (NMIA) has been revealed by the GVK group. The upcoming greenfield airport has been envisioned by the union and the Maharashtrian government through CIDCO (City and International Development Corporation).

The lotus symbolizes elegance and purity. Being a greenfield project, it also fits that, to blossom, the lotus must grow through the murky waters of a pond. The idea is to have an architectural translation of the cultural beauty of Maharashtra in a timeless form. This idea was flawlessly executed in the design by Zaha Hadid Architects.

With an 1160 Ha site, the NMAI will be one of the largest greenfield airports in the world, designed to serve 90 million passengers per annum. Though the site conditions are challenging, this project endeavors to develop the site into a facility that connects Navi Mumbai to the world and hence, growth. Three international multi-level terminals have been planned around a landscaped forecourt at the center.

This central composition is flanked on both sides by two parallel runways that function simultaneously. In response to the developing transportation technology, NMIA is equipped with a multi-modal transportation hub that can be reached by a high-speed expressway, metro, suburban rail, and water transport. This special feature ensures that no one area in the airport has excessive traffic and remains spacious and efficient. The central axis has a symmetrical quality and runs east to west. It has a 9 + 9 lane road connecting to the central terminal complex providing a congestion-free vehicular passage to the airport. 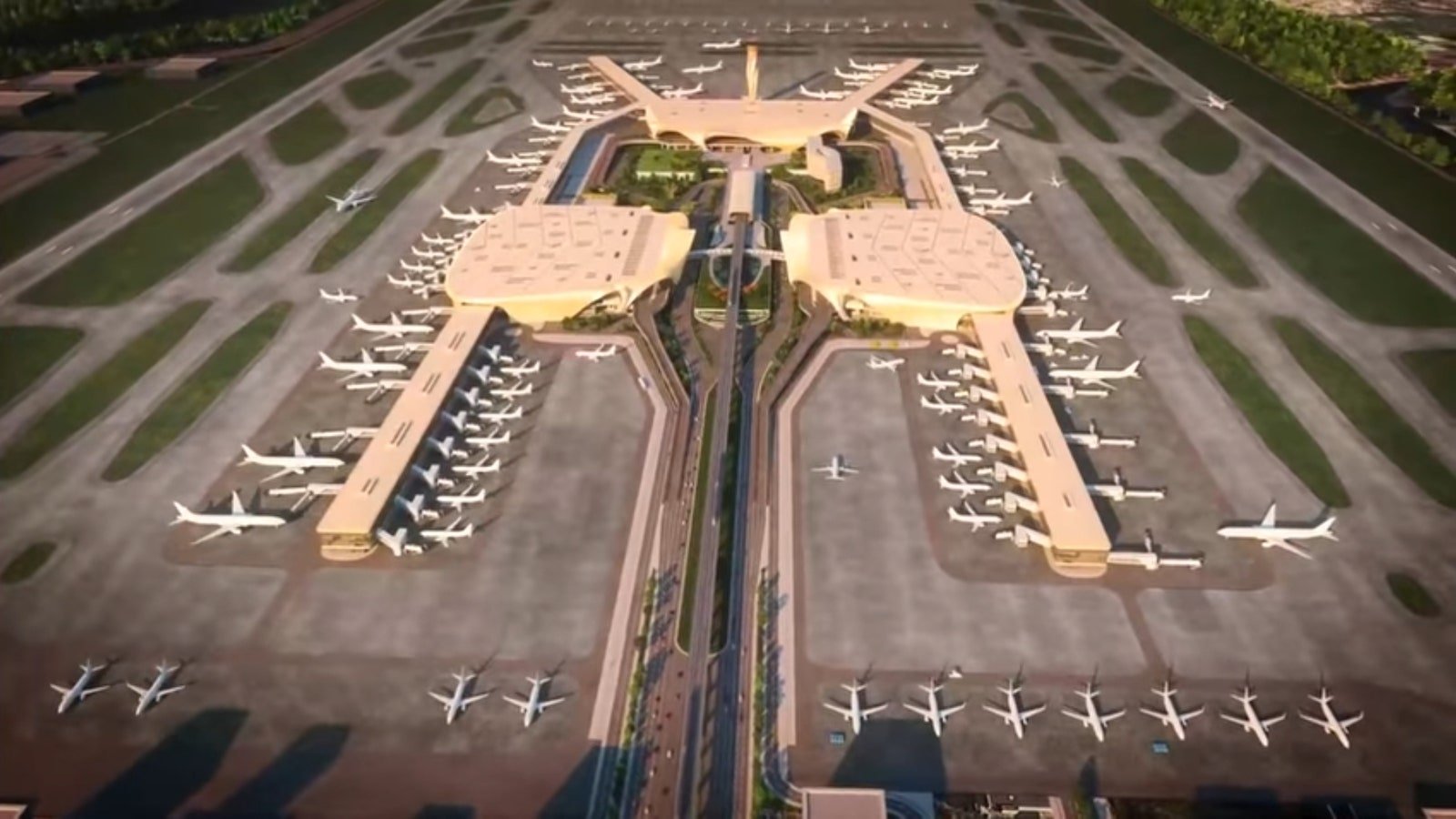 The public is led into the terminals via a grand, welcoming entrance that is curvilinear and fluidic; a signature of Zaha Hadid Architects. The flowing form of the entrance itself stirs up excitement in the users. The terminals are designed with simplicity in mind to improve the efficiency of the functioning of the airport. The terminals have only two floors to minimize walking distances. By ensuring the most convenient adjacencies in the plan, the terminals are extremely compact in design. Check-in area, security check and the shopping complex placed one after the other make for a hassle-free passage until boarding.

The terminals are designed to have 88 check-in counters, 26 immigration desks and 29 sleek aerobridges that further reduce congestion of traffic in any one area. The lounge areas are comfortable and provide views of the functioning terminal. Efficient placement of the departure gates eliminates the need for vertical circulatory transport in the terminals. Even the boarding areas for international and domestic flights happen in two different wings, further segregating the flow of people.

As one traverses within the terminal, the lotus petals slowly reveal themselves. The columns taper downwards and the tops of the columns open into seemingly delicate petals that hold the ceiling up. The “petals” of the column add to the lightness of the entire structure and ties the futuristic design of the terminals to the cultural inspiration of the design, the lotus. The design perfectly incorporates the cultural symbolism of India within the modern envelope and hence sets a new standard for airport terminal design.

The flow of spaces is bathed in sunlight during the day, removing all semblance of rigidity of the building. The NMIA design also ensures that the passage of incoming travelers through the airport is free and easy. This ensures that their experience is smooth, if not rejuvenating rather than tiresome. Differentiating the movement areas for those that look to exit the airport and those that have traveling flights makes the airport extremely efficient.

The airport is to be implemented in four phases, with its primary phase to cater to 10 million passengers per annum. Though GVK hasn’t announced the year of completion, it is much-awaited, for the design of the NMIA is no doubt an architectural marvel.