A home is a place of shelter. It signifies a place of belonging, where they seek rest and make...
331

Earth As A Building Material

Today, big cities across the world compete on attracting innovative human capital and forces. New investigations hawed that, in the competition, urban design has been regarded as an effective device. Public places like streets, squares, and nodes are given valuable positions in urban planning design in the modern world. Therefore establishing a relationship between the city and economic growth can be the future of a city.

The built environment of a city or the cityscape can attract capitalism and economic growth in a city. As the infrastructure grows in a city it is more prone to economic development as the theory of Amartya Sen talks about the three factors that a country should have to be worthy of being globalized i.e. democracy, equity, and efficiency.

In 1966 when the state of Haryana was formulated, Gurugram was designated as one of its districts. Initially, most of the area was agricultural in nature being an agro-based economy. 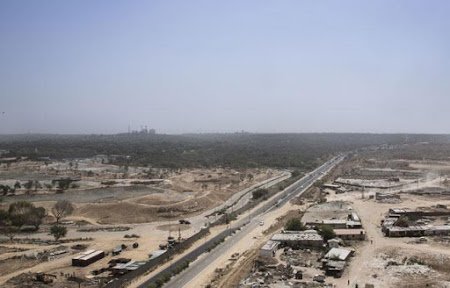 After Maruti Udyog establishing in 1966, by the end of 1982 became Udyog Vihar Ph-1 Industrial Area followed by automotive industries like Hero Honda which was followed by setting up of the number of other automobile industries.
Economic policies before 1991 did not allow foreign equity in the Indian market which hampered the efficiency (return on investment). The banking system before 1991 was only nationalized in India; therefore it was not easy for companies to get small loans (micro-credit).

With the liberalization and globalization, Gurgaon has become home to numerous job options by the end of the 1990s with GE (General Electric) being the first to set up its outsourcing unit in Corporate Park in Gurgaon in 1997. This has led to the huge population growth contributing to the making of the Millennium City.

the development has occurred in the two stages, in the pre-liberalization phase, the development of the city and the coming up of new areas have been neighboring the old settlements of Gurgaon, towards Delhi, establishing Old Gurgaon. The development began spreading outwards predominantly since the 1990s with the coming up of NH-8 (all things considered at present). These divisions have come up post-1990s and to a great extent been worked by the private engineers, are situated to one side of NH-8  and establish New Gurgaon.

The major reason for the commencement of growth in the case of Gurugram was the presence of factors of production i.e land, labor, capital, and entrepreneur.  On the basis of these factors of production the development of infrastructure or the built environment of a place, in this case, a city, takes place which leads to globalization.

In the case of Gurugram globalization was a major factor that leads to the influx of migrants in the city in search of work or to set up industries. With the entry of Maruti Udyog in the city, economic development started in the city and post 1990 liberal policies globalization took place. In order to cater to a large number of migrants and growing population the requirement of housing arises. Here the entry of DLF and Ansals in the city of Gurugram lead to acres of land being put into the housing development. Post-2010, we can see the expansion of the city towards the golf course road and Sohna Extention road due to expansion in the city.

As the industrial areas in the city were already exhausted the need for extension arises towards Manesar and Maesar industrial area and SEZs were proposed in the Gurgaon-Manesar urban complex 2030 AD. This extension connects back to the factors of production and the circle starts again. 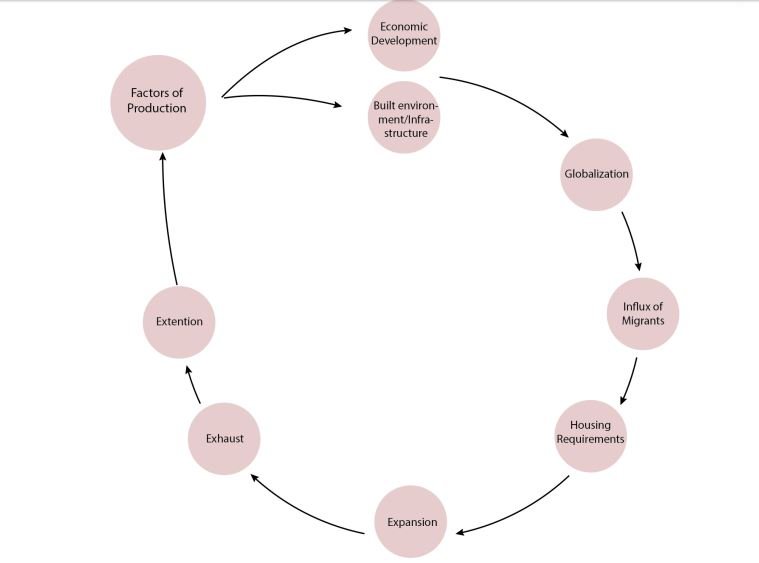 Dissertation in Architecture 2019-2020 : The Interdependency Of Built Environment And Economic Development – Case Study Of GURUGRAM

Sushant School of Art and Architecture