Since from the beginning of the decade, developments in the Internet of Things (IoT) technology have enabled the rise of ‘smart’ building. A complicated interwoven network throughout new-buildings is now being practiced with building management systems for controlling all aspects of maintenance. The smart building’s concept has existed for a longer time, even though the exact definition of a smart building may have seemed elusive.

There’s a huge opportunity for architects to use the metadata they are collecting advantage by not just controlling the temperature or lighting within a building but also various attributes of it. 2019-20 has arrived with even higher expectations from smart building technologies that will accelerate the building industry far beyond its optimal use. So are you ready for embracing the IoT Smart Building advances happening now? 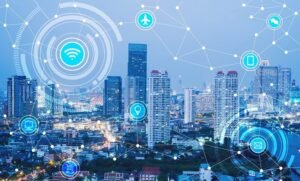 The Internet of Things (IoT) constitutes a network of embedded devices that incorporate sensors and communication functions. It is a new paradigm that has changed the traditional way of thinking and living into a high tech lifestyle.

IoT uses smart devices and the internet to provide in order to facilitate human lives. It also provides innovative solutions to various challenges and issues related to government, public sector, private sectors as well as businesses. IoT has become an important aspect of life that can be sensed everywhere around us. It also takes advantage of quantum and nanotechnology in terms of storage, sensing, and processing speed which were not conceivable or used before.

A huge shift from traditional ways to innovative ways can be observed in our daily routine life with the increasing involvement of IoT devices and tech. Listed below are some of the IoT applications in day to day life:

The IoT has amalgamated hardware and software to the internet to create a smarter and livable world. 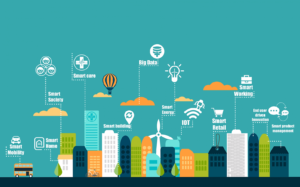 How does IoT help in Smart Cities?

IoT helps in creating dynamic, and intelligent cloud-based interoperable networks by connecting electrical, mechanical, and electro-mechanical systems and platforms. Builders and designers throughout the world are more frequently looking to incorporate IoT devices and solutions into infrastructure.

A survey in the U.S discovered that 60% of building managers are familiar with IoT, and 43% believe the IoT would shape how they operate their buildings. The European Commission expects that 72% of consumers in European Union will have smart electricity meters installed in their homes by 2020 and 40% will have gas meters.

Amsterdam is one example of many, leading in the world of smart cities. They have been proactive in encouraging its members to develop smart cities, and the European Commission has allocated 365 million euros. In Paris, a program called Autolib in 2011 has seen a fleet of vehicles to 3,000. The connected vehicles are tracked via GPS, and drivers use the dashboard to reserve parking spaces.

Copenhagen has started using sensors to monitor the city’s bike traffic in real-time, which provides valuable data on improving bike routes in the city. It is a crucial task as more than 40% of the city’s residents commute by bike each day.

New York City has tested gunshot detection technology in police precincts in Brooklyn and the Bronx. New York also piloted a connected car program in 2015 with the goal of learning where drivers make frequent hard brakes or sharp turns.

Being a new concept in smart buildings and cities, only a small percentage of organizations leverage IoT for building management. The potential of smart cities is nearly limitless, and it will keep innovating in the coming years. IoT iterates, improves, and keeps building. We can’t wait for new technology to come in the market instead we should ourselves find ways in which this technology can be used.