Future Buildings to Use Biotech To Become Living?

Chinese hackers attempted attack on Indian Cyberspace more than 40,300 times in a week post- Galwan clash An Overview: After a...
308

Yona Friedman and His Extraordinary Use of Math

When you hear the word ‘biotech,’ it usually occurs to you of agriculture, medicine, and food protection, and you don’t really think of buildings. But Biotech will strive to help and enhance buildings of the future. In the following articles, you’ll be learning about new innovative technologies for future buildings.

The idea might seem a bit blur, but introducing the technology in a situation like a climate crisis will radically help in the way we live and build our environment. Biology is far more capable of extraordinary things than just the primary ones. Some ideas seem far-fetched, especially when it comes to buildings that grow, heal. Breathe, have immune systems. 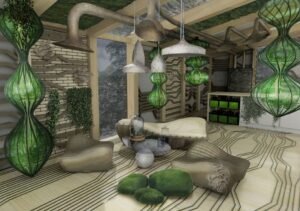 What will Building Materials of the future look like?

When compared the innovative technologies of building material with traditional materials, it will be recognizable. Take mud; it was once a standard material used to make bricks and then sun-dried. Wood is a material that is still used and considered living. Portland cement was produced using limestone (made up of skeletal remains of marine organisms) with other materials like clay. Paper and gypsum are still used to make drywall. The point over here is, when you look closer, even today, we have some unusual or unexpected origins of the materials.

With the increased interest in innovation to find new materials to build structures that will last, it is also important that the structures are environmentally responsible. For example, green roofs- incorporating plants and vegetation into the design of the building, it serves as an environment boost with aesthetics. When we can be sure of, one way or another, the building materials will continue evolving and developing with new innovations, tackling new problems. Some of the innovative materials you can find below.

Mycelium is a threadlike network of roots from of fungi which run underneath the ground, when dried it is used as adhesive for super-strong, water, mold and fire-resistant building. Mycelium brick is an organic brick formed from organic waste and the mycelium fungus.

The best example of Mycelium can be seen in New York, Hy-Fi installation, which was in display in 2014. It is a 13-meter tower made entirely out of 100,000 mycelium bricks that were naturally grown from shredded corn stalks. The structure diverted the natural carbon cycle to produce a building that grew out of the earth and required no energy or produced no waste or by-products. After three months, the structure was disassembled, and bricks were decomposed to compost.

A new type of microbial fuel cell is set to develop, which takes the domestic waste and generated small amounts of power. These fuel cells can be integrated with bricks of the building to take in wastewater and bacteria and convert them into energy.

A practical example of the use of Microbial Fuel Cells is the Bio-Intelligent Quotient, BIQ House in Hamburg, Germany. It is an apartment building, a one of a king, first algae-powered structure. The two sides of the building have an outer shell where microalgae grow. The sunlight and carbon dioxide combine together to produce enough biomass to generate electricity.

Bacterial spores are highly resistant, dormant structures formed to protect from adverse environmental impacts. When mixed with concrete, it can be a protective layer. The bacteria animates when water seeps into cracks of a building, triggering a chemical process causing new calcite crystals to grow and heal the concrete.

Ways in Which a Building Will Become Living Thing:

1. Buildings that will grow:

We are already using nature’s building materials, from- crushed shells of limestone to the timber of dead trees, and yet it is getting innovative day by day. Mycelium can grow on little more than wood chips and coffee grounds in a concise period of time. Creating materials with significant structural performance.

2. Buildings that will Heal:

Cracks in a building’s concrete usually depict the downfall of a structural building. By mixing the cement with embed bacterial spores, the concrete will heal by itself. The bacteria get animated when water seeps in healing the concrete. Using such innovative and simple methods might add decades or more to the lifespan of a traditional concrete building.

3. Buildings that will breathe:

Many buildings across the globe, especially the high rise towers, are on permanent life support. Mechanical air circulation and conditioning systems circulate air to heat with cooling the rooms. An open window to allow natural ventilation is always an option, but what if the buildings could breathe?

Materials consisting of layers of bacteria spores (similar to self-healing concrete) can change their shape in response to water and when it dries, contract. Using latex membrane coated with bacteria spores, the materials will flex and open pores like sweat glands, allowing air to flow the walls.

4. Buildings with that will have Immune Systems:

While we repeatedly spend millions of pounds every year on antimicrobial cleaners for the microorganisms that we are surrounded with. It has been carried away and known for decades now, people living near farms may suffer less from allergies than those in urban habitats. University College London has been researching about kitchens being made bio-receptive. Promoting the growth of bacteria to offer resistance against diseases. Imagine, being able to eat probiotic yogurts in a probiotic kitchen!

5. Buildings with that will have Stomachs:

Structures often absorb materials and energy, while returning waste, needing to be taken away and treated at industrial scales. But the research suggests that the waste could actually become a source of energy for a building. Living Architecture project has been working on developing a microbial fuel cell that generates a small amount of power. The fuel cells can be integrated into bricks, making it a part of the structural fabric of the building. The bricks take the wastewater and bacteria, breaking down into chemical energy.

The trend of today is to create smart buildings or smart homes, which, as of now, refers to only the Internet of Things (IoT). But the smart building can also mean incorporating biotech for making it smart and resulting in smart, eco-friendly, ecologically sustainable, and behaving like an eco-system. Furthermore, when you incorporate and combine Biotech with IoT, you will have really built the building of the future.

As exciting it may sound, there is also a downside to biotech buildings; that is, they will die. But buildings already have their own lifecycle. Imagine if a biotech building dies, in return to the Earth, forming food for the next structures to rise and adapt. After all of this, it only takes a look to appreciate what we have and contemplate what we can achieve. The change is indeed inevitable and every now or then, a new building material governs the market.