The ‘Shifting Nests’ is a project proposed by the BLA Design Group to provide a sustainable housing solution for...
314

Demolished Materials Getting a Rebirth!

The Newest Addition to the Hudson River Edge by Thomas Heatherwick: A Park That Floats on Water!

Started as a blog run by a young student of architecture, Matus Nedecky in 2008, today, FlyingArchitecture is an architectural visualizations studio that manifests your design ideas into high-end static images as well as animations. Their services help in clearly communicating your ideas to your clients as well as for advertisement of it by depicting imagery of them in real life.

FlyingArchitecture also produces and sells 3D models, contextual scenes, V-ray materials, and even software-use tutorials. These additional services attract not just firms but also students, freelancers, and visualization aspirants.  They help those who seek to gain from FlyingArchitecture’s expertise and develop their skills. 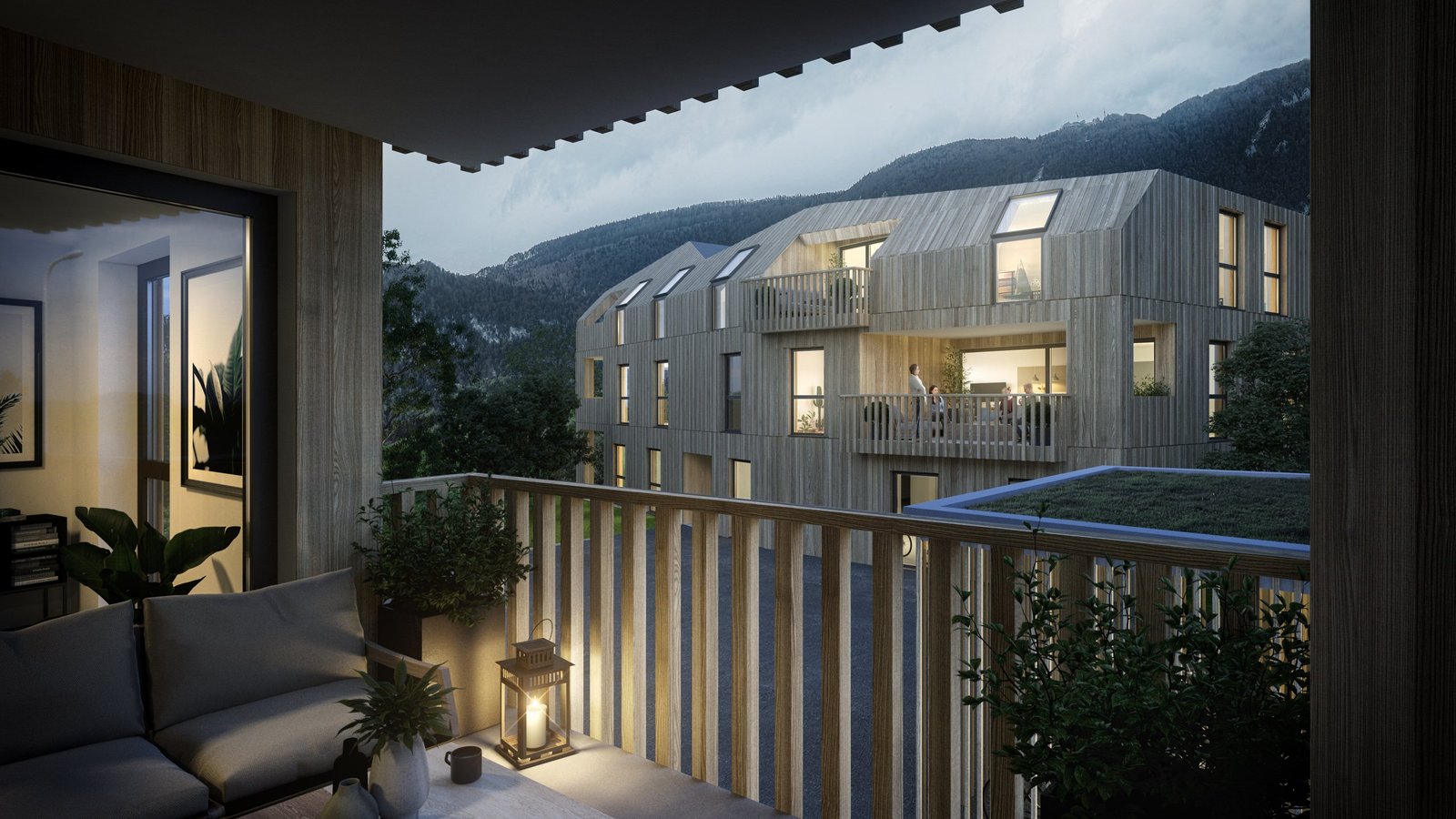 It isn’t uncommon to find firms or architectural practices with extremely good architects, engineers, and designers, who produce extremely clever designs but don’t have the expertise or the know-how to elucidate the ideas. FlyingArchitecture’s 3D models of designs make it an extremely easy way to explain ideas in a three-dimensional way.

With more than a decade of experience, FlyingArchitecture produces still-CGIs that are of A-grade quality. The studio pays careful attention and produces precise imagery of the designs and the context that they are designed to be in.

FlyingArchitecture produces renderings that are budget-friendly without compromising the high quality. FlyingArchitecture’s animations are highly coveted because of the added element of the experience from moving through space.

FlyingArchitecture’s prodigal talent produces some resplendent imagery and animations that astound the designers of the project themselves. They exude a realism that’s hard to accept as a software rendering.

FlyingArchitecture uses the modeling and rendering software to display varying views of the projects that they work on. This helps them accentuate specific design features that the designers want to highlight.

The high-end, still-CGIs produced for the following project display the green terraces, the blocks’ staggered layout, and a large amount of green dominating the site. The white blocks rise above the site in sheer contrast against the green. 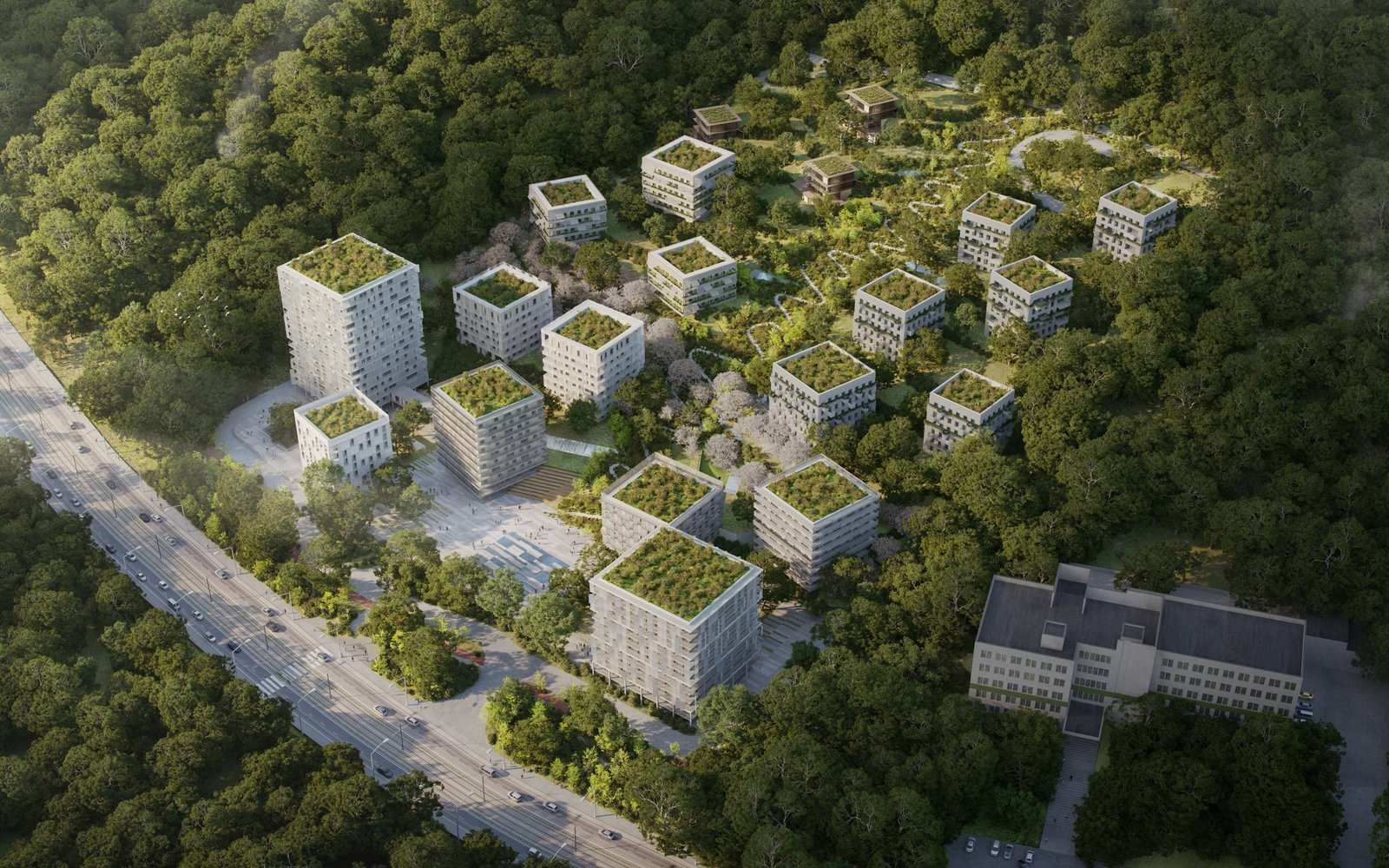 This image displays that the blocks are raised above the ground on stilts and even material specifications like pavements and the seats with wooden backing on the sides. 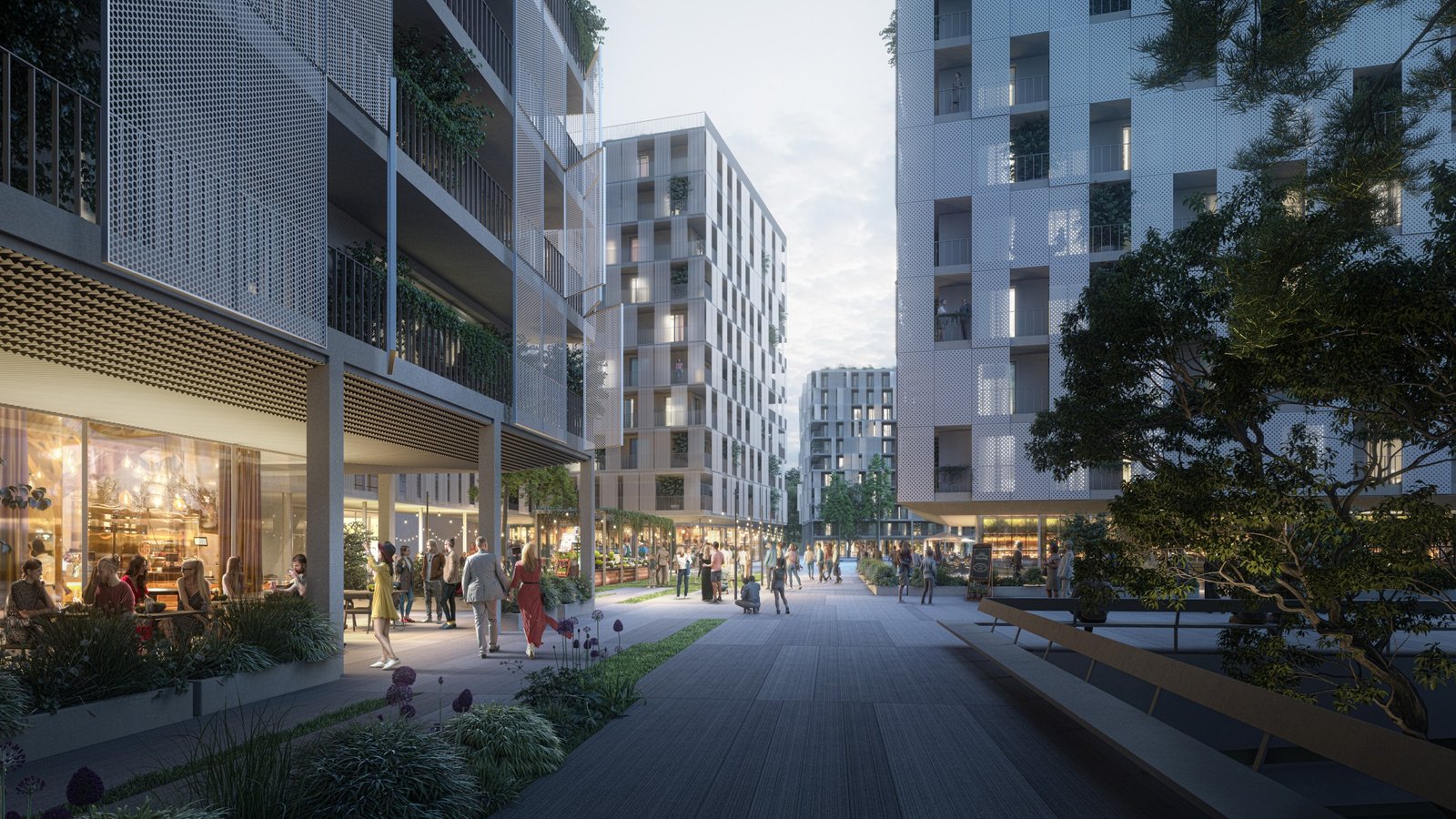 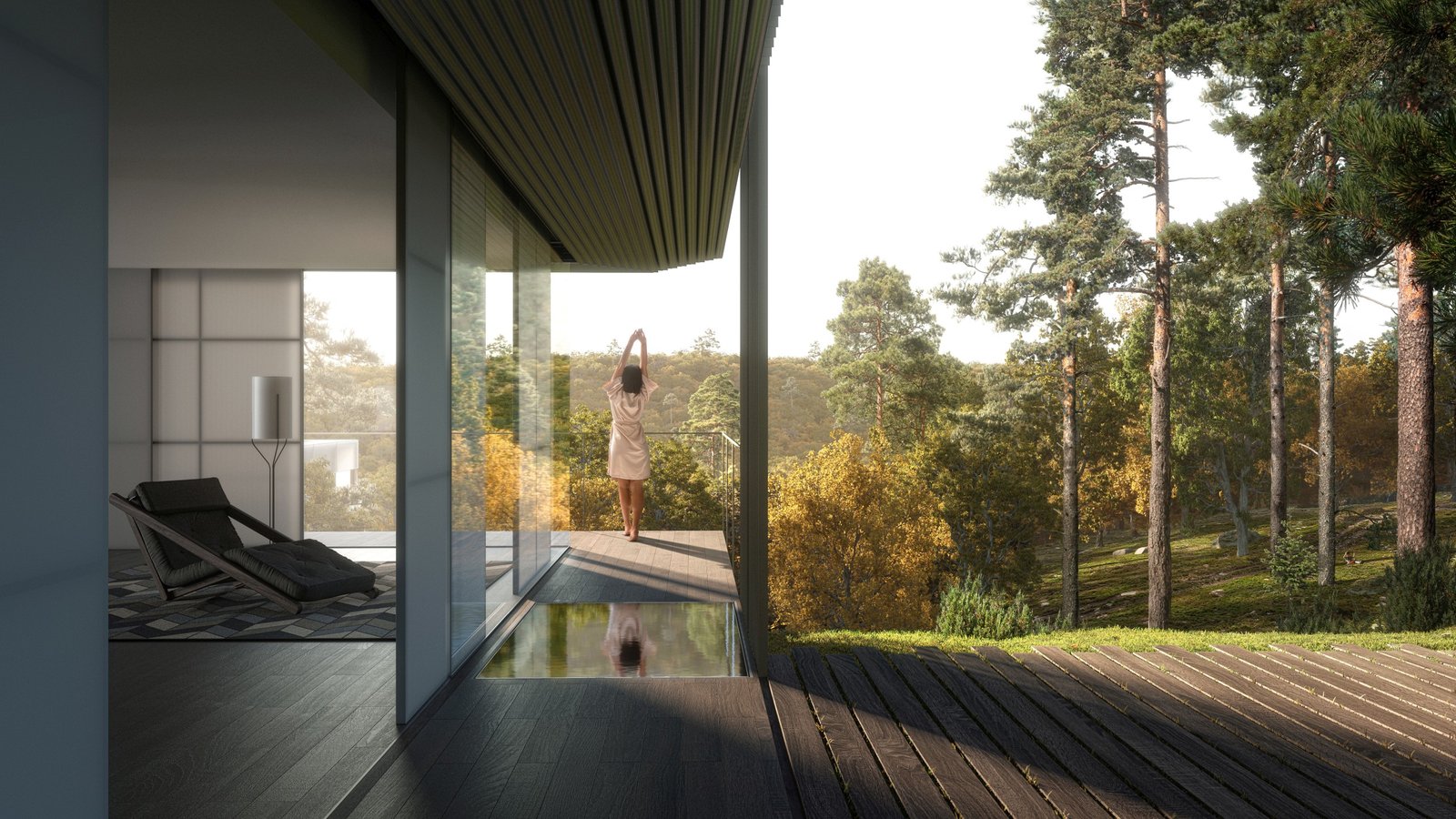 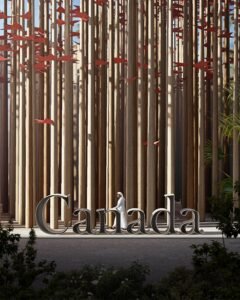 Incorporating human beings in the rendering makes for an easy understanding of scale. 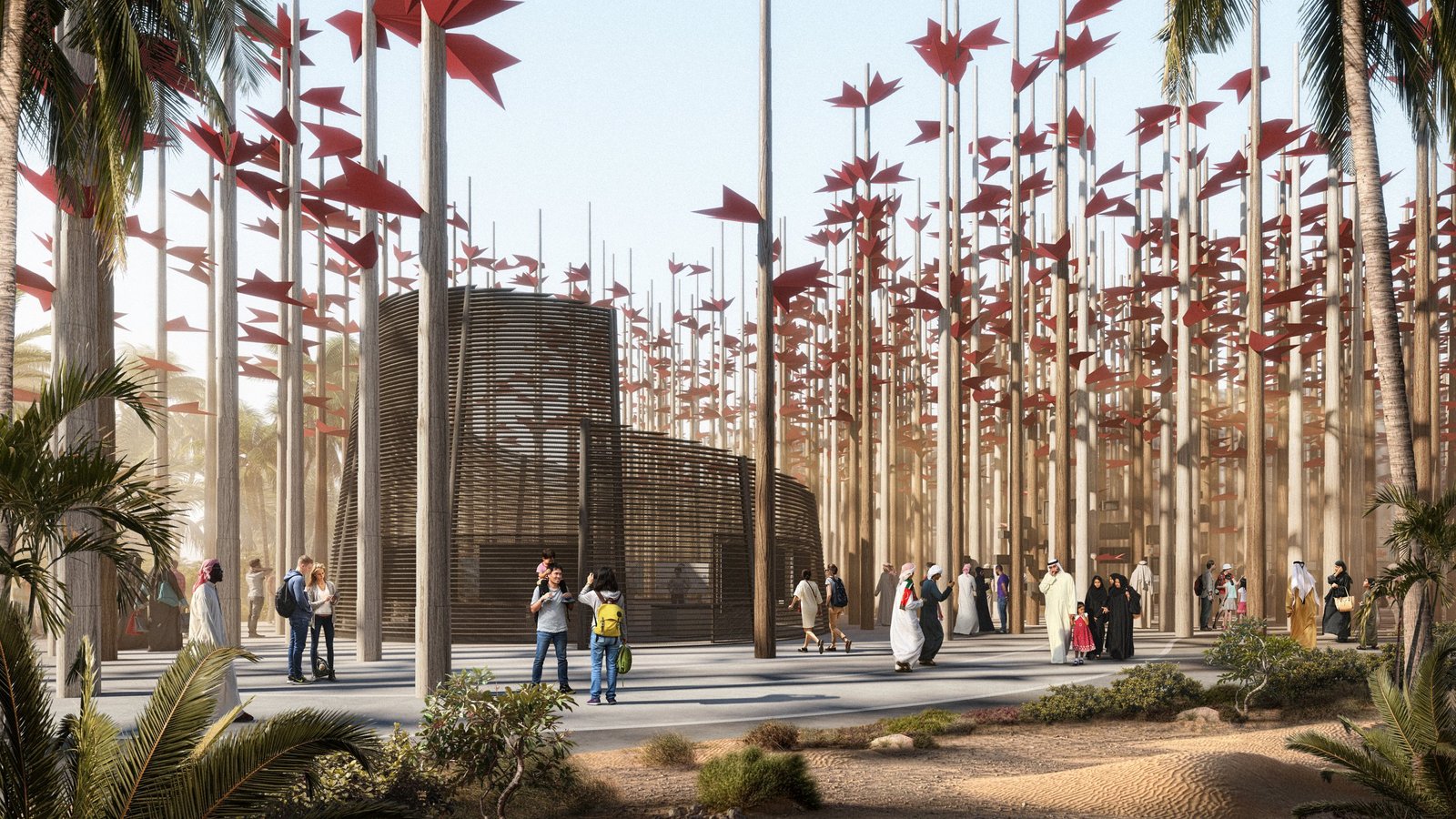 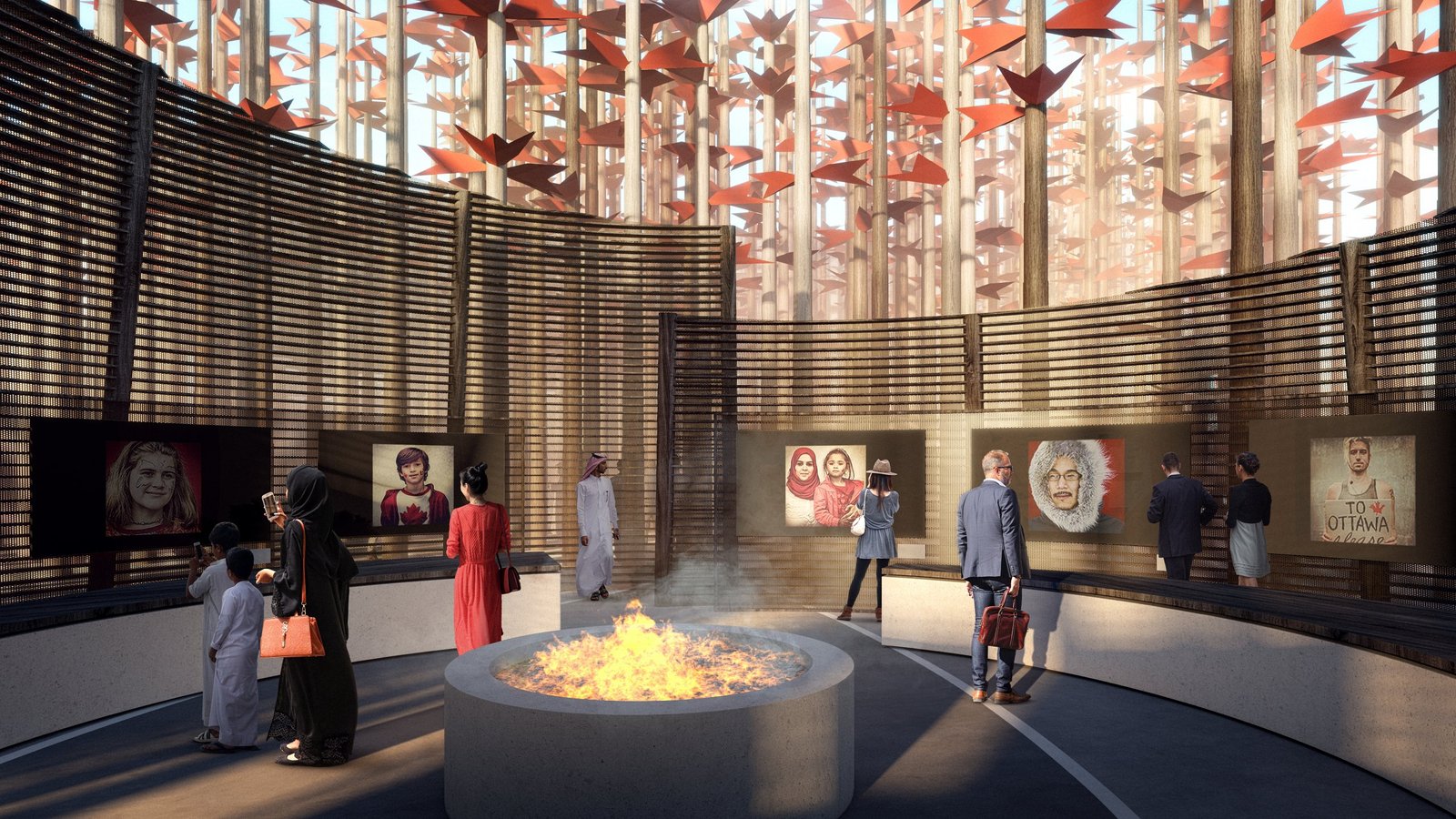 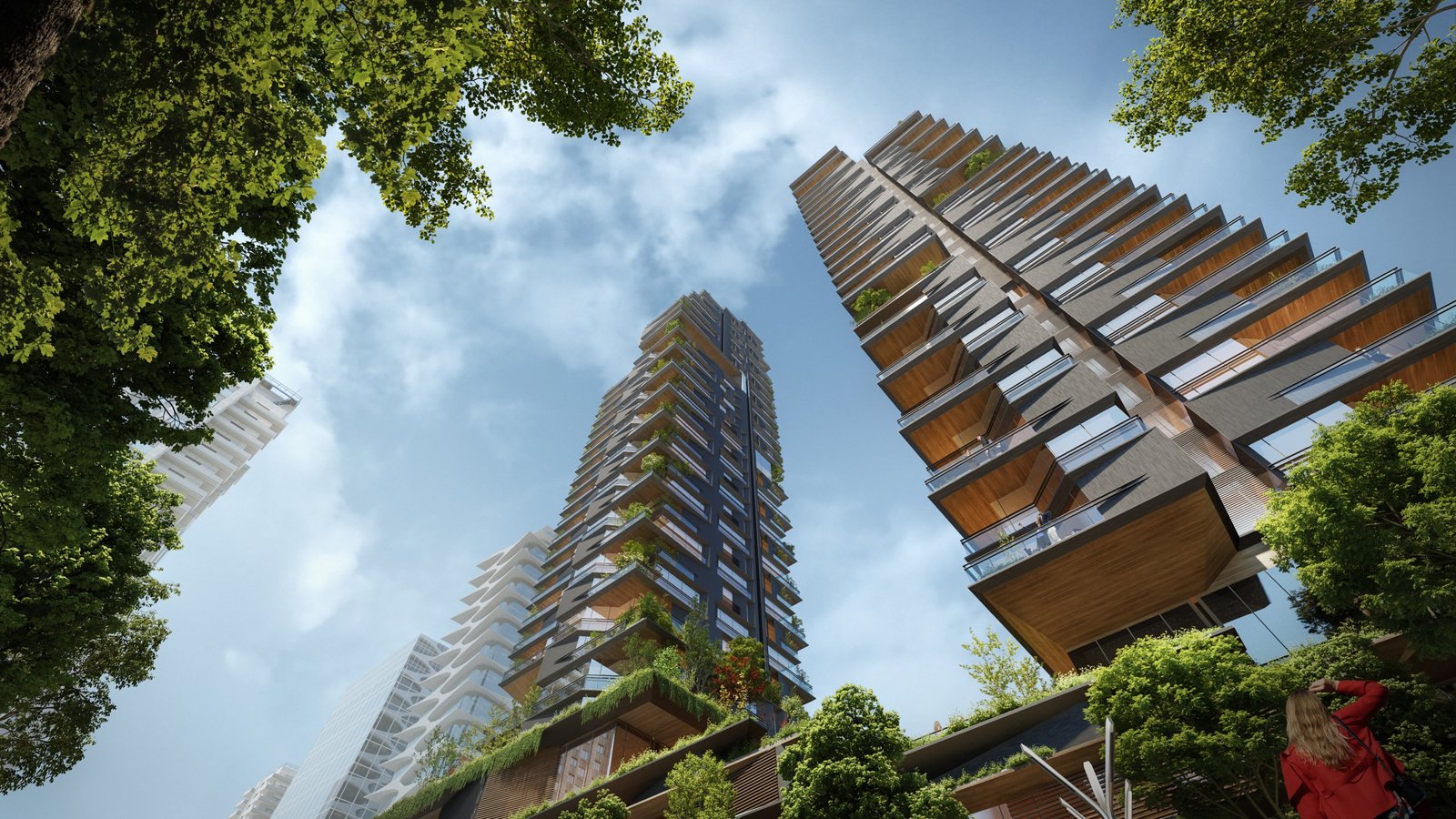 The use of views from a human-eye level expresses the scale of high-risers as experienced by a human walking along with it. 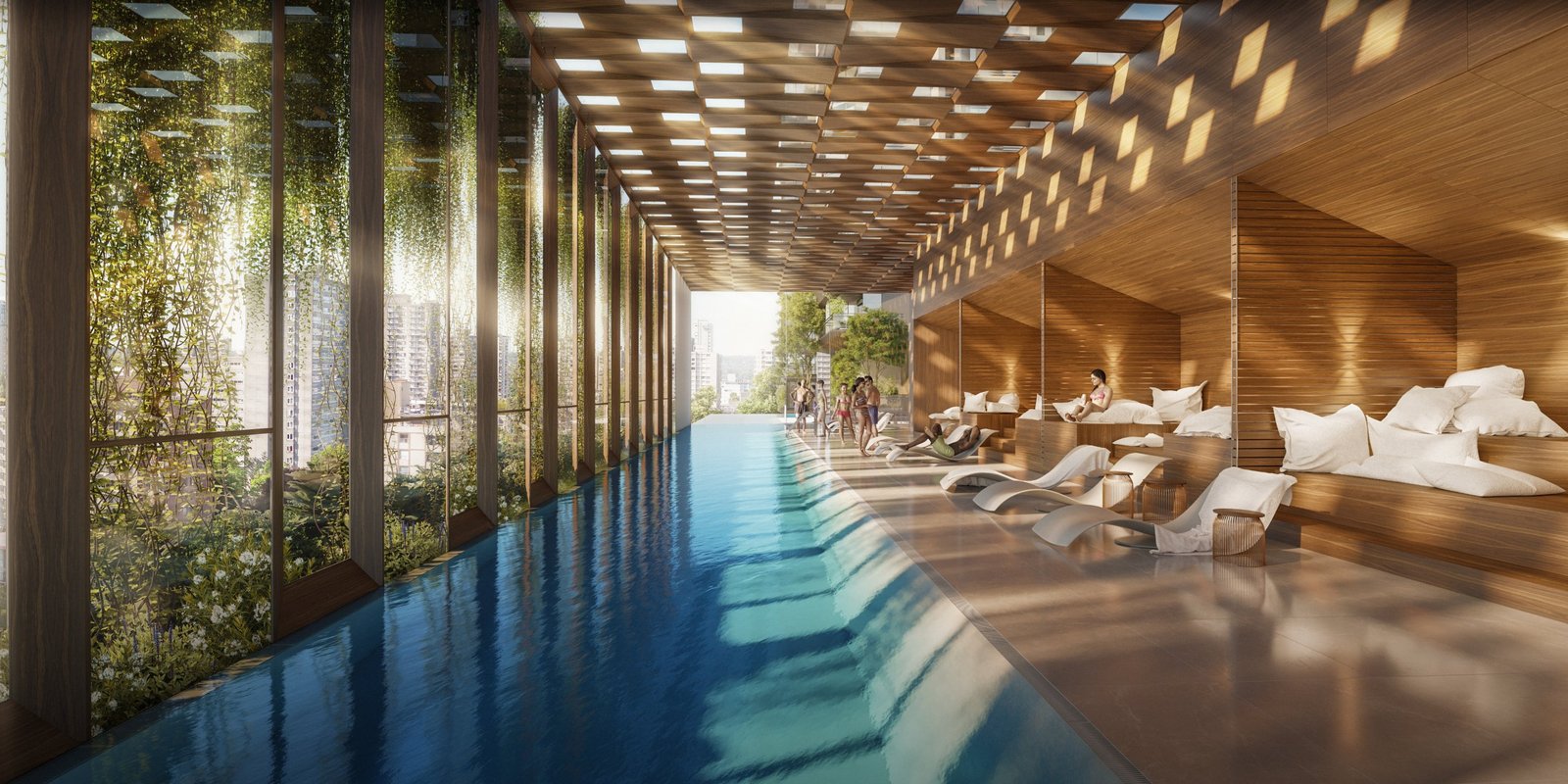 Views of spaces under perforated envelopes are especially tricky to work on and produce mind-blowing results that truly capture the experience of the space. 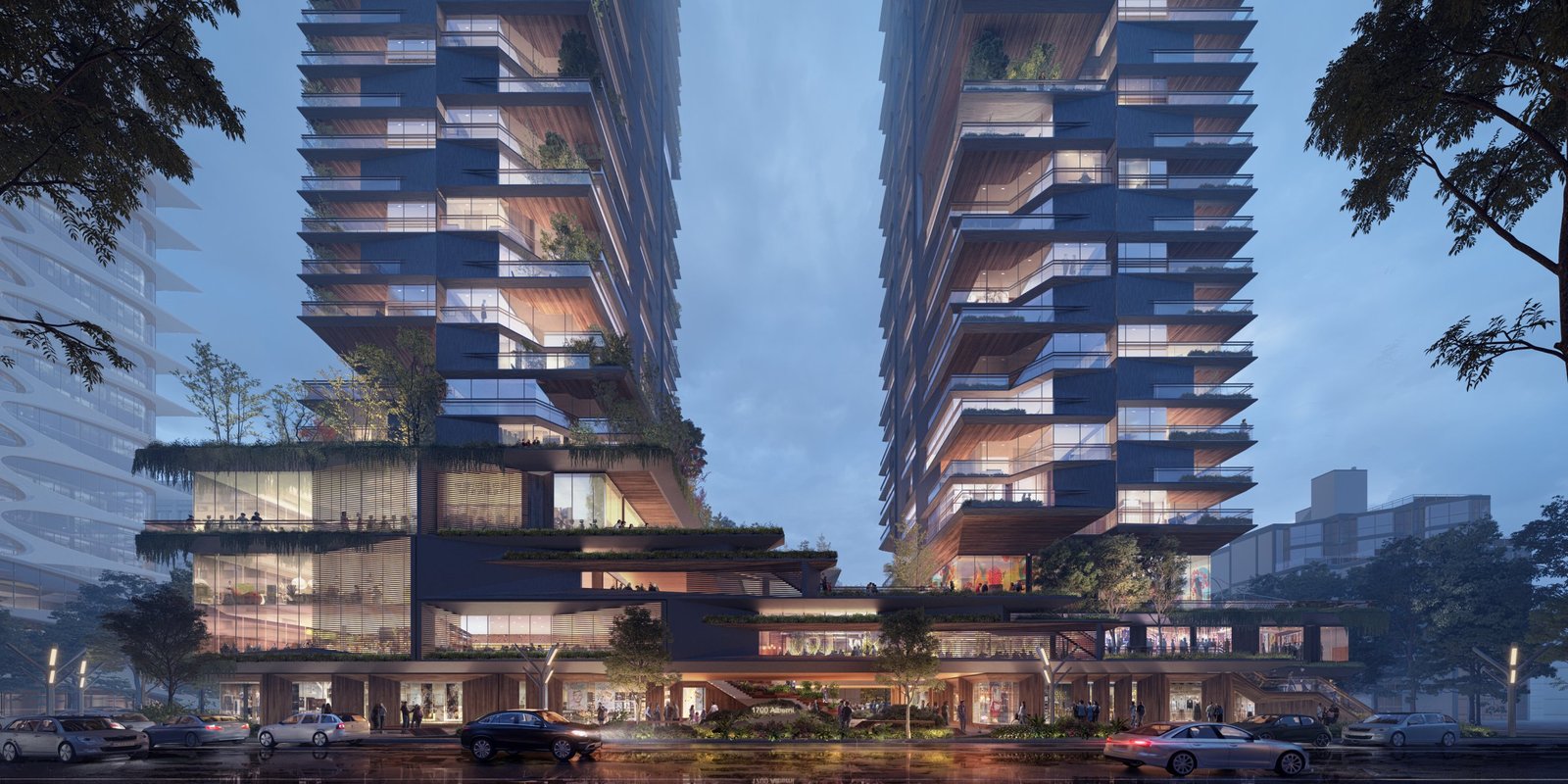 Matus Nedecky, the CEO and CG artist, started FlyingArchitecture as a blog, which slowly but surely grew into a studio that flourished due to its team of immensely talented and enthusiastic members who thrive on representing 2D designs in a 3D world. Rather than the famous “Form follows Function” opinion, he says “Form follows Form ”.

His team currently consists of five other members who are all CG artists with architectural degrees.

All of them are different in their own ways but share a common passion for architectural modeling and visualization. Softwares and libraries of 3D models such as Rhino, V-ray, rhinoceros gratis, modelli 3d rhino, and 3d model sky are the most commonly used.

Members of FlyingArchitecture hold constant workshops and lectures around the world on the workings of different software and their uses. They primarily target students or architecture but the seminars and workshops are open to all.

Their tutorials delve extensively into the use of certain software and help views produce detailed and aesthetic-oriented renderings that bring designs to life.

During the ongoing Pandemic, the members of FlyingArchitecture have newfound time on their hands and have used it well. There isn’t a delineating line between work and passion, there is nothing that holds FlyingArchitecture back from designing new models, materials, and recording tutorials in their free time or any time, really.

They have even added a new label in their online store that allows you to filter FlyingArchitecture’s free 3D models out from the paid ones.

The extra time on their hands has been used to sharpen their skills, develop new ones and work on in-house projects. Practice truly does make perfect as FlyingArchitecture refines their skills with Rhino, V-ray rendering, Blender, and Photoshop to produce astoundingly realistic results. 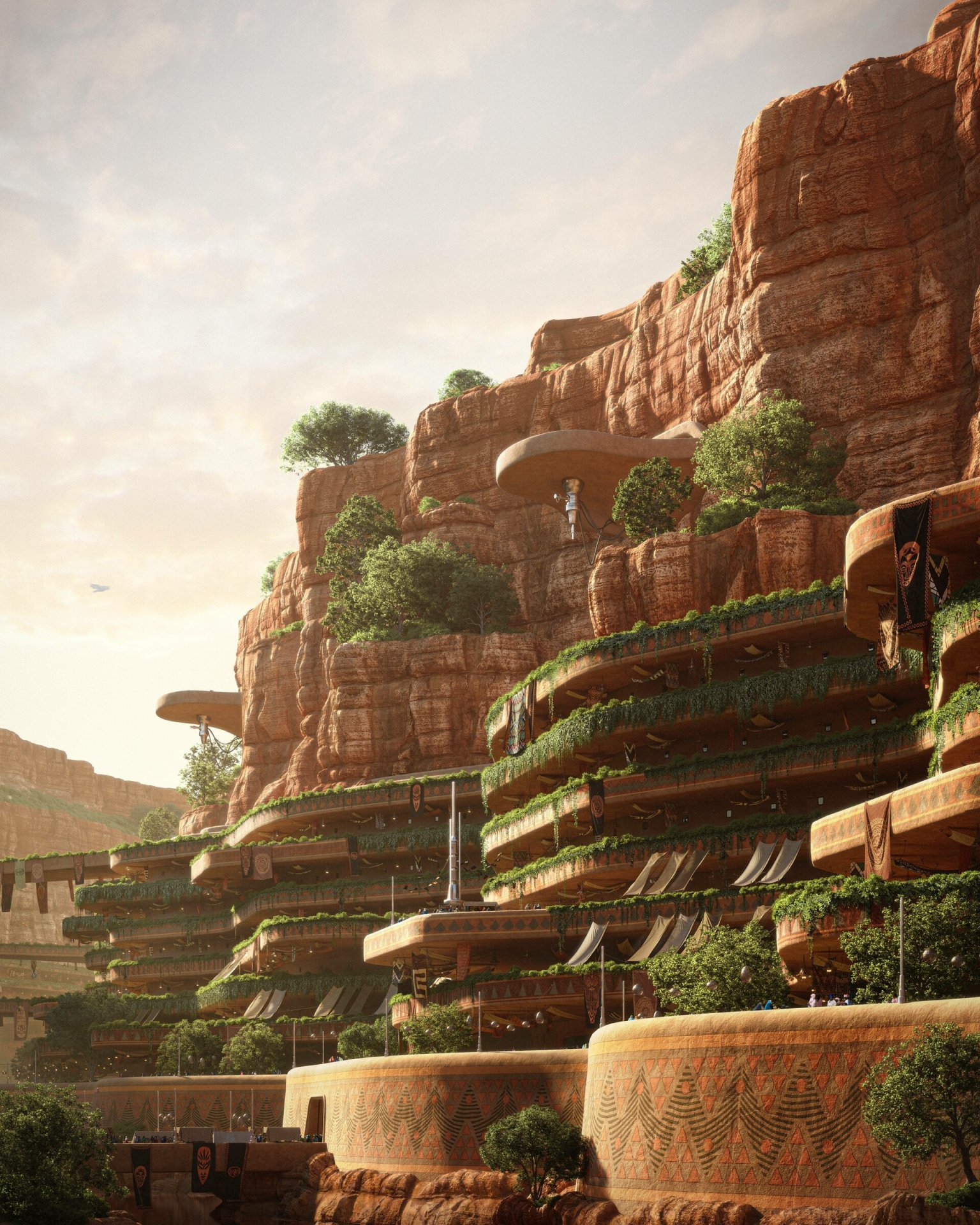 The Desert Arc, the Flying house, and some other new additions to their portfolio are projects that are developed by an original to the members of the FlyingArchitecture studio.

In light of the pandemic and general economic distress, FlyingArchitecture has also made all of their tutorials free of cost to help reach more people and help them learn more about what they are passionate about. 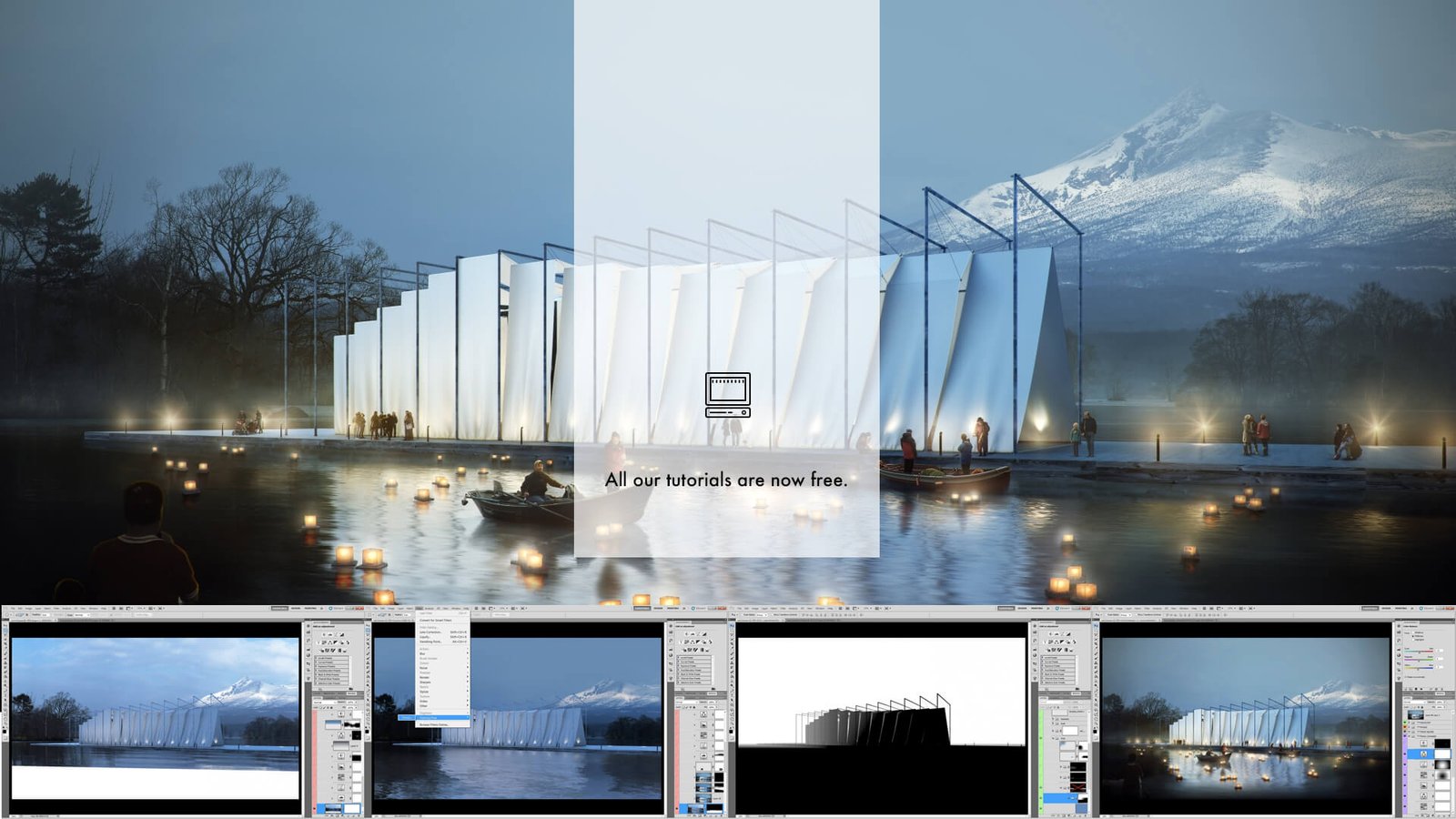 It is evident that FlyingArchitecture is more than passionate about its line of work and serves to bring even the most bizarre ideas to visual imagery. More importantly, they have a lot of fun doing it.