Colour is a form of universal expression. Its different shades and hues spark a plethora of feelings, emotions, and memories. Colors are also ingrained and woven into cultures and tradition, that gives it a certain identity. It’s is also used in art, where artists use it to tell their stories in different forms. Colour is in nature, seen in plants, trees, and flowers, to the deep blue ocean and the fishes within or even animals and humans alike, that come in different shades and kinds.

Colour in architecture has been around for ages. Some good examples of which would be Colourful Stained Glass in Christian Churches, Early Islamic Mosques painted with intricate patterns, paintings that appeared on ceilings of palaces and courts in the Renaissance period.

Specific cities around the world were painted with shades of one color for different reasons, which gave those cities a character that came to be known around the world.

This character of those cities sparked curiosity in people from all over the globe to marvel at and also to experience being immersed in color in a physical aspect.

Known as the “Pink City” of India, it is one of the most famous tourist cities across the country. Every other building is painted with a terracotta pink which gives off a beautiful deep salmon color. The history of this color being used is that Queen Victoria and the Prince of Wales were visiting the city and the ruler at the time Maharaja Sawai Ram Singh instructed all the houses and other structures to be painted pink to welcome them. After this, he passed a law stating that all future houses and buildings must be painted in the same color which prevails to this day.

Copenhagen is a great example of traditional Danish Architecture. The city is filled with structures that are painted in strong traditional colors which are not overpowering to the landscape. The colors provide a stark contrast to its typically gloomy climate, breathing life into its streets and neighborhoods. The shades that can be used are in a limited range, so there ends up being a familiar vocabulary as one passes through it.

The city of Jodhpur in Rajasthan is also a city of a single color painted across the structures. When observed from one of the highest points of the town, the Mehrangarh Fort, the viewer is struck with the beautiful sight of different shades of blue. The origin of this color being used in the city actually was started by the Brahmins who lived there. They painted their houses blue to indicate their cast but over time this trend was adopted across the entire city. This gave the city an identity of “The Blue City”.

The quaint village that appears to be carved onto the side of a caldera completely painted in white glistens and dazzles in the sunset every day. Houses and buildings alike were all painted white, mainly to reflect the sunlight and prevent the interiors from getting too warm. The village has narrow passages, streets, and stairs that face white walls with blue window and door shutters, another charming characteristic that complements the surrounding hills and ocean. Being a few kilometers from Santorini, this beautiful village is a popular tourist spot where people come to marvel at its pristine and scenic views. 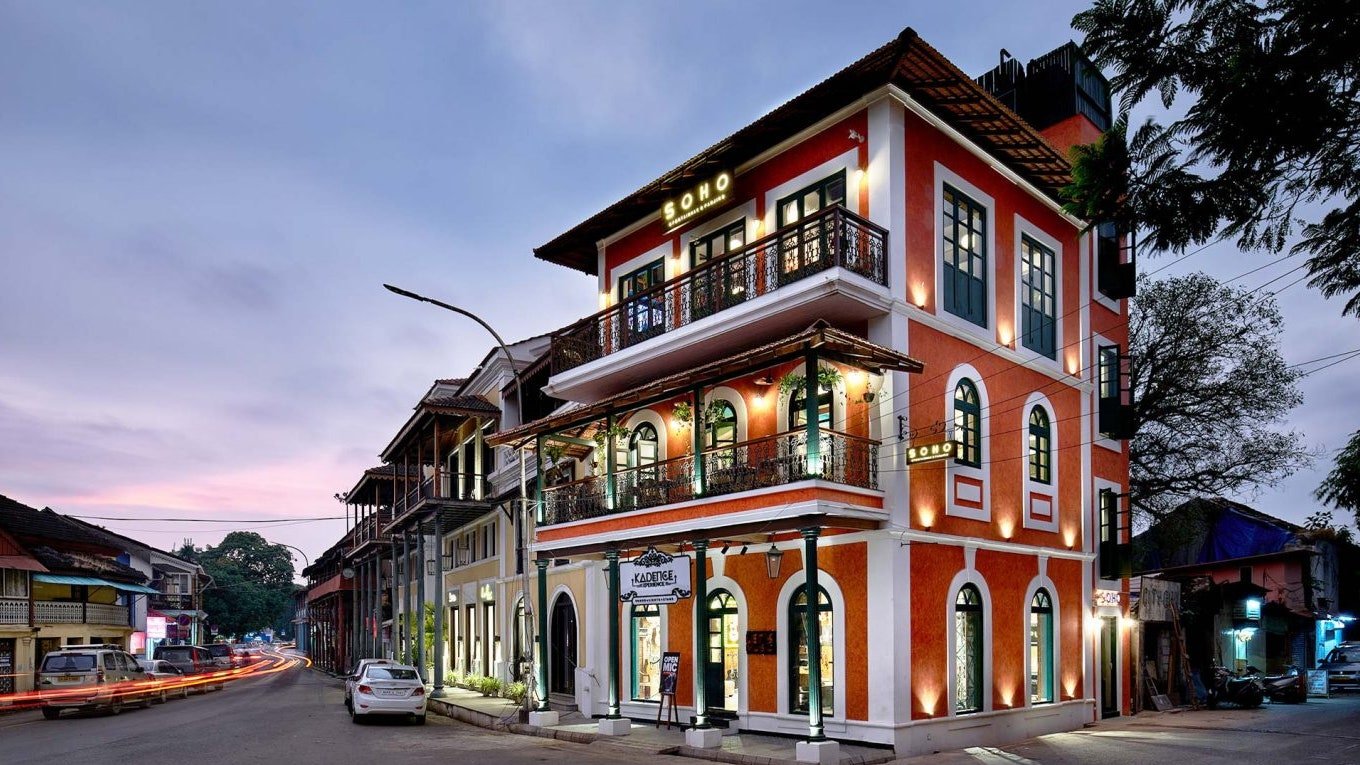 Throughout the state of Goa, the influence of Portuguese culture can be seen in its culture, food, and architecture. Portuguese architecture had the specific characteristic of pristine white buildings or using white to accentuate openings on colorful facades. Many structures in the city of Panjim are painted bright shades of blue, green, yellow, orange, and red and have white borders around their doors and windows. Fountain Haus, a famous street in the city features a row of colorful buildings one after the other. This colorful nature of the different structures is a reflection of the eccentric, fun, and free nature of the Goan culture. 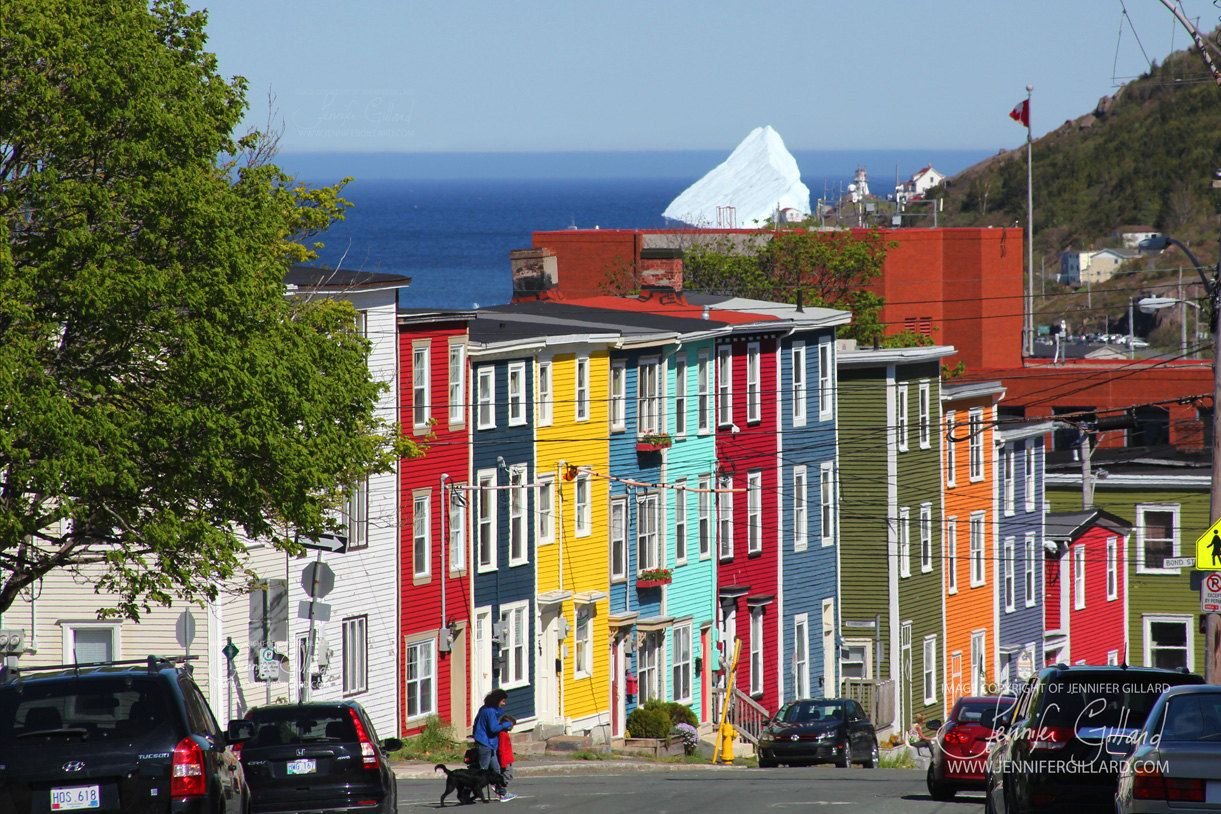 Having a similar vocabulary as Goa, this town’s primary-colored huts sit quaintly against the side of the hill. Each house is placed haphazardly and zig-zagged from one another, where shades of blue, red, green, and yellow pop out from the canopies of trees surrounding them, in the form of small homes. The area has rightly earned its name as “Jellybean Row”.

The city of Chefchaoen looks almost like the city of Jodhpur in India, with its landscape filled with shades of blue. Nicknamed the “Blue Pearl of Morocco” the shades of blue appear to be cascading down the hill. The city is a beautiful labyrinth of ramps and stairs that are carefully framed against the homes and buildings. Some claim that when the city was painted blue by the Jews who fleed from Hitler while others claim that the color repels mosquitoes. A common belief is that the city is meant to represent the sea, which it accurately does, comfortably nestled between the hill and the ocean.

There’s something about color and architecture that sparks creativity and excitement in one’s mind, that urges them to explore further and quench their thirst and marvel at things that are beautiful. These cities are just a few which over the years have become tourist spots and hubs for photography, travel, and art and continue to draw people in wither their vibrant beauty.